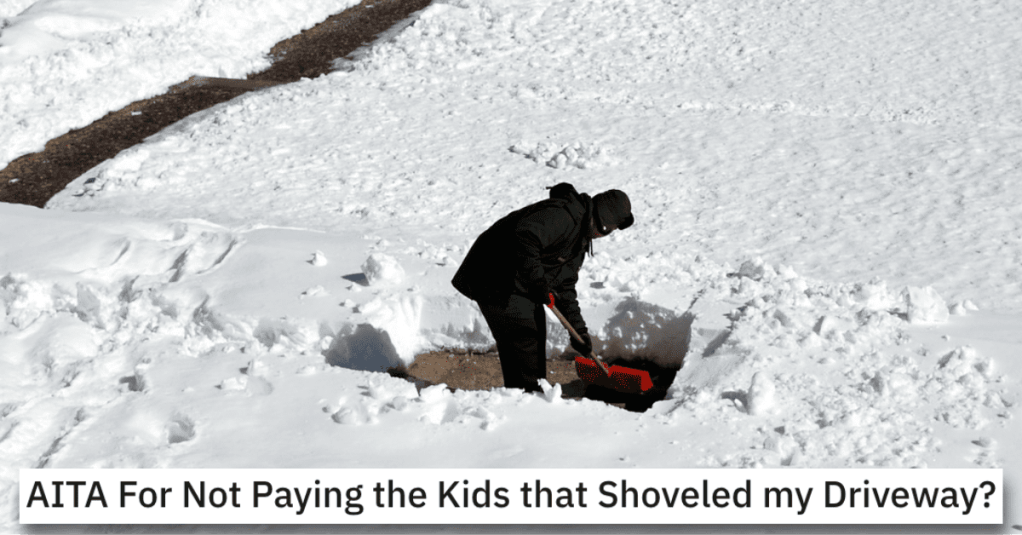 She Didn’t Pay the Kids Who Shoveled the Snow off Her Driveway. Is She a Jerk?

Oh, you mean you weren’t laboring in the snow for me FOR FREE?

I had no idea!

In case you aren’t picking up what I’m putting down, I’m being sarcastic.

But enough about me, check out this story from Reddit’s “Am I the A**hole?” page!

AITA For Not Paying the Kids that Shoveled my Driveway?

“I am one of the many in the midwest hit by the snowpocalypse. I think we got like 14 inches where I live?

I also want to preface this with I don’t like kids. I don’t h**e them, I just don’t have any experience with kids and haven’t felt the need to produce any of my own (26F).

I work from home and received a knock at my door today. There was a group of like four 12-year-old-ish boys, and they had shoveled my driveway and sidewalk and were now requesting payment. They expected $15 each.

I was really confused because they never knocked to ask if they could shovel my driveway. They just did it without asking and were expecting to be paid.

I was really just dumb struck and kind of said “I don’t have any cash” and one of them pulled up a smart phone saying they had their mom’s venmo account.

Again, me just being extremely confused I started saying that I never agreed to pay them for anything. I was going to shovel my driveway at lunch time. If they had asked, I would have said no.

The kids got really upset, and were like “You’re not going to pay us for our work??” But again, I didn’t ask them to shovel my drive way. They started yelling at me and I just kind of shut my door.

Fast forward a couple of hours, their mom comes and knocks on the door. I open it and she started screaming at me for not paying their kids. Her points were:

They put in the work and should be paid

-Her boys did a nice thing for me

She was proud of her boys for using their snow day to help people, and I was being really ungrateful and going to make them turn to drugs next time

This is where I started to get kind of mad. I said that I never asked for their services, and it was nice that they shoveled my driveway, but I never agreed to pay them and they really should have asked first.

She insisted I pay them this time and they’ll ask in the future. But I don’t want to reinforce bad behavior. Just because they’re children and people feel the need to let them get away with whatever, this is just not a cycle I want to perpetuate for these kids. You can’t manipulate people into paying you for something they never asked for.

Idk, so far I’ve refused to pay and I’m now getting torched on NextDoor for being a heartless monster who took advantage of children.

So I’m turning to you, reddit, AITA here? If I am, I’ll just pay them I guess. Idk if I’m not seeing the situation clearly because I just don’t have any experience with kids.”

One reader said this woman is definitely not the a**hole here. 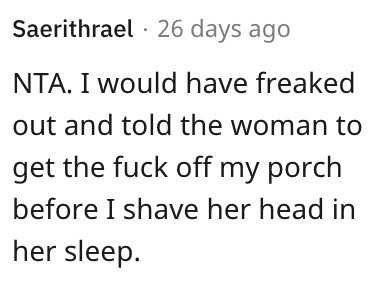 And this individual had a good idea about how she could get a little bit of petty revenge. 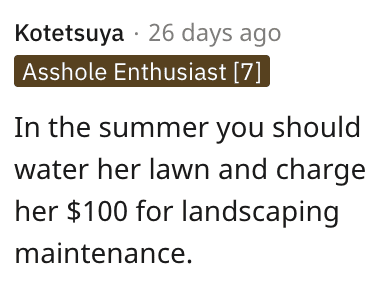 And this Reddit user said those kids should have asked permission before they did the job. 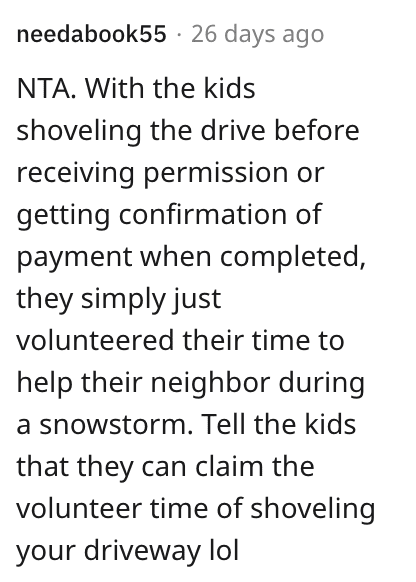