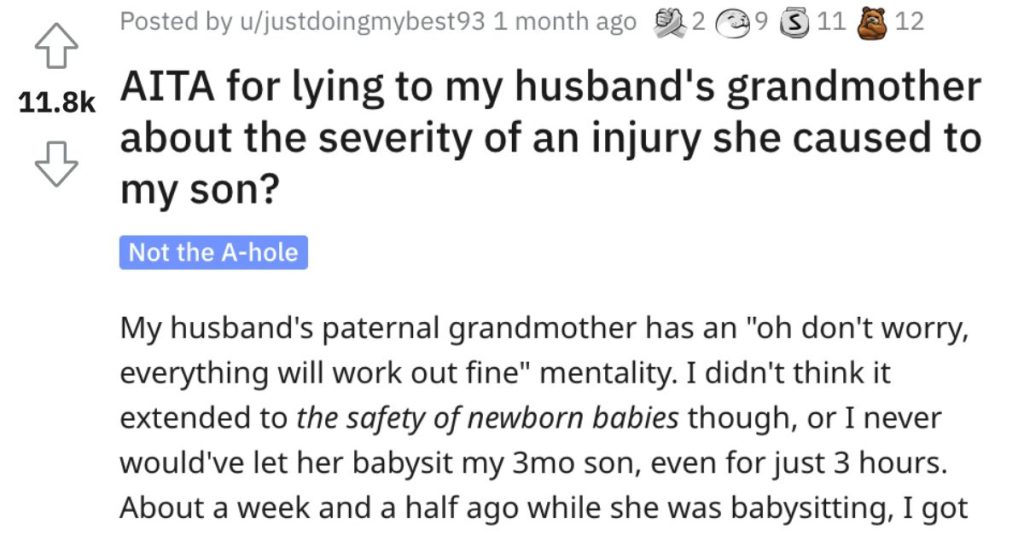 She Lied to to a Family Member About Her Injured Son. Was She Wrong?

I supposed that little white lies are okay once in a while, but in the story you’re about to read from the “Am I the A**hole?” page on AskReddit, a woman is questioning if she went too far with a lie to her husband’s grandmother.

AITA for lying to my husband’s grandmother about the severity of an injury she caused to my son?

“My husband’s paternal grandmother has an “oh don’t worry, everything will work out fine” mentality.

I didn’t think it extended to the safety of newborn babies though, or I never would’ve let her babysit my 3mo son, even for just 3 hours. About a week and a half ago while she was babysitting, I got a call from her saying my son had “a bit of a tumble”.

I heard my son screaming in the background and my instincts said something was extremely wrong, so I said to get off the phone with me and call an ambulance, then call me back and tell me what happened once the ambulance was on the way. She started handwaving it with “I don’t think we need to bother with an ambulance, babies are tougher than they look you know, basically made of rubber.”

When I said he sounded like he was hurt she admitted he had “a bit of a scrape and a bruise” and when I pushed further she said it was on his head. I hung up and called the ambulance myself because I wasn’t about to sit there and waste time trying to convince this idiot that a head injury on a 3mo baby is a serious thing.

My absolute hero of a boss drove me to the hospital because I was in no state to drive, and I needed to be on the phone to notify my husband and then get the full story from his grandmother.

It turns out she not only dropped my son, she dropped him while walking down the stairs, so he fell onto the second from bottom step and hit his head on the third from bottom step. She then wasted time calling her son, who told her she should probably call me or my husband.

At the hospital she kept being dismissive, saying I was overreacting and my son would be fine, until I made her leave. As it turns out, my son has a minor fracture in his skull, which will heal on its own, though it will take a couple of months.

We’re so incredibly lucky. The doctor said a fall like that could have easily caused a life threatening brain injury, and my husband’s grandmother hesitating to call an ambulance absolutely could have increased his risk of serious disability or death.

I was furious with her, but I felt she should know my son was ok so I called her, but when she answered me call with “what did I tell you, he’s fine, isn’t he?” Her condescending tone and blasé attitude to my son’s safety pi**ed me off, so I said “actually we’re still not sure if he’s going to make it.” Then the apologies and the guilt and the distress came out.

My husband called her later to tell her my son would be fine. My husband’s father and grandmother are really mad, they think it was a dirty trick to lie to an old lady about her great grandson’s injury, but my husband and I maintain that she deserved to feel bad about what happened to my son, and she obviously wasn’t until she thought his life was in danger.

I for one will never let her near my son again, but I hope she’ll now be more careful about the safety of any other children she has care over.”

One reader said that the husband’s grandmother should not be around children alone anymore.

Another person said that this mom can’t let her babysit ever again. 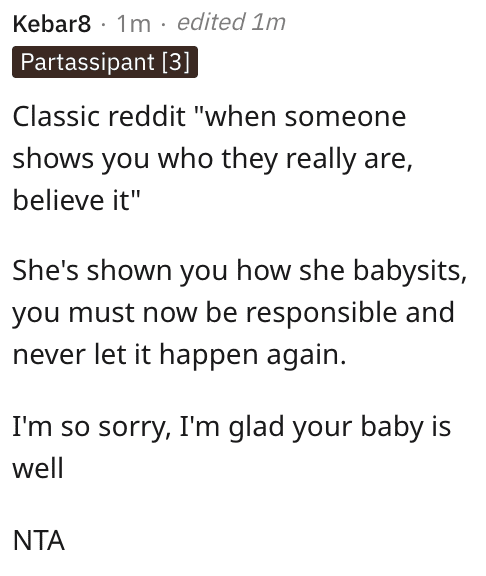 This individual said that while accidents happen, the way the woman handled it shows what kind of person she really is. 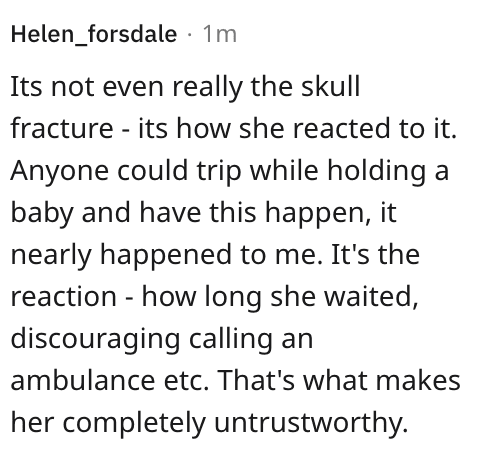 And this Reddit user said that she shouldn’t allow this woman to have any contact with her kid. Period. 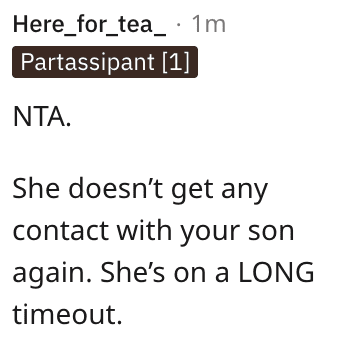 What do you think about this woman’s behavior?