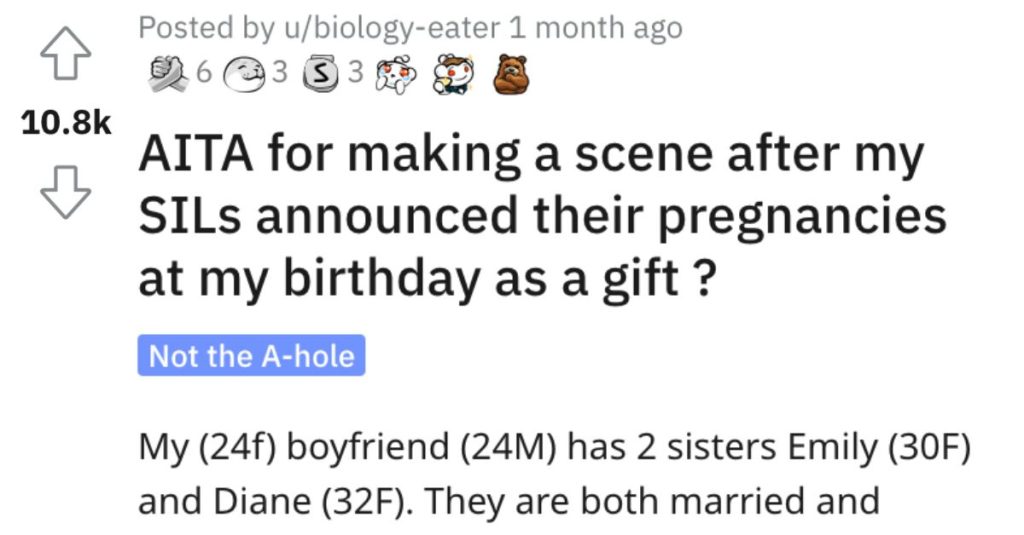 She Made a Scene After Her Sisters-In-Law Announced Their Pregnancies at Her Wedding. Is She a Jerk?

Why do so many people out there feel the need to steal the thunder at weddings…that aren’t theirs?!?!

AITA for making a scene after my SILs announced their pregnancies at my birthday as a gift?

“My (24f) boyfriend (24M) has 2 sisters Emily (30F) and Diane (32F). They are both married and trying for a baby. Diane announced her first pregnancy at mother day this year.

She gifted her mother a baby shoe and a positive pregnancy test. Everyone was happy and even more when Emily told everyone that she was also trying for a baby. Later that evening, I texted them both saying “Congratulations, I’m happy for you. It’s a bit weird for me and my boyfriend because we recently learned that I’m sterile.

I hope I didn’t cut the mood but I’m really excited for you both”. They sent me some texts reassuring me and everything went well. Sadly, Diane lost her baby 2 months after this party.

Fast forward to last week. We (MIL, both SILs and I) met for a girls night. My MIL wanted to organise a party for my birthday so she asked me if that’s ok for me and what do I want. I said fine but birthdays are a though for me. When I grew up, my parents always made my birthdays about them.

They never invited my friends or close family. They always invited their colleagues and friends, they had big parties where they drank a lot of alcohol. So after I wanted to be sure to have a small party with close family (12 persons) and nothing really big.

The party was yesterday. I was helping my MIL when both my SILs and their husbands arrive. They both also brought their in laws and some friends. So what was suppose to be a small party ended up with more than 40 persons.

My MIL was a bit fuming because we had to go by more drinks and foods for uninvited guests. The party went well untill it was gifts time. I opened gift from my MIL and FIL, then one from my boyfriend. It was sweet.

Next, my SILs gifted me one small package for them both (which is fine, I asked for small gifts if they were willing to give one). I opened it and it was a S-size shirt (I’m more XL and S) saying “Best future aunt”. There was also, written with a marker pen “X2”. The package also contained 2 positives pregnancy tests and a photo of them both touching their bellies. I looked them in the eye, asking “are you pregnant ?”. They both said yes.

Emily took the shirt out of my hands and showed it to everyone. As I was starting to cry, I ran outside, my boyfriend following me. I had a panic attack. When I came back, everyone was happy and they were all congratulating the pregnants couples. I felt really sad. My boyfriend talked to his parents and we left the party without saying anything to anybody else.

I received, in the evening, some nasty texts from some of my boyfriend’s family saying things like “Why did you ruin their announcement ? It was only a birthday party, please grow up”. I do feel bad.

My boyfriend is planning on telling them to f**k off but I don’t want him to ruin his relationships with his family. My FIL and MIL called me to apologize, saying things got out of hands.”

One person said she’s NTA and this was HER party.

Another reader said this was definitely not appropriate.

And this Reddit user said she’s NTA and that her sisters-in-law are entitled a**holes. 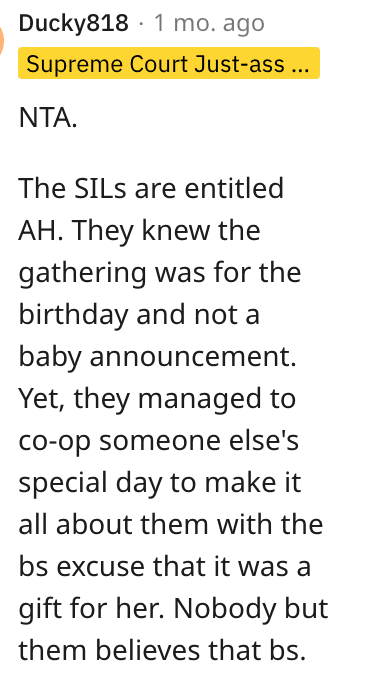