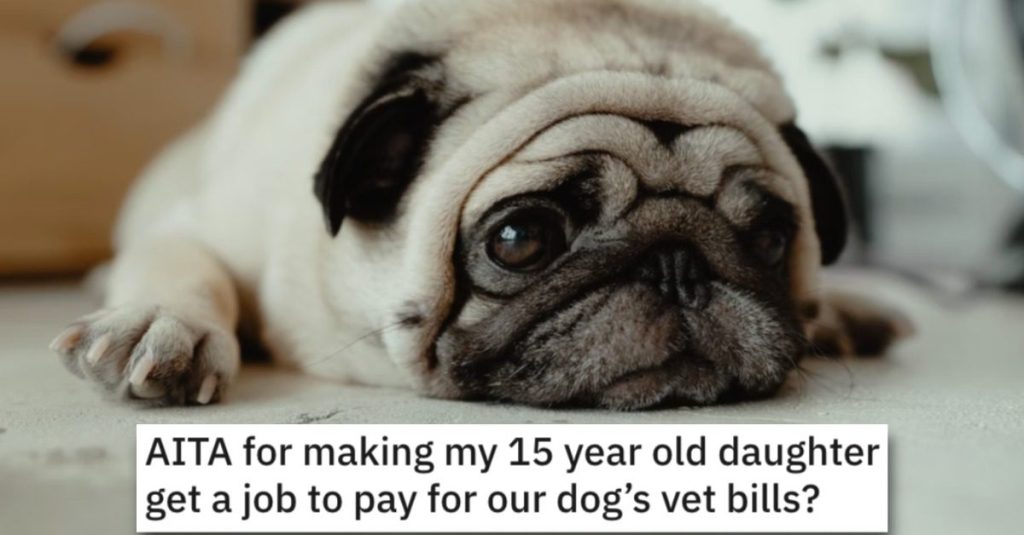 She Made Her Daughter Get a Job to Help Pay for the Dog’s Vet Bills. Is She Wrong?

Kids need to learn about responsibility.

And by the time they’re 15-years-old, you better believe that they need to know right from wrong.

So is this mom a jerk for making her teenage daughter get a job to help pay their dog’s vet bills after a mishap?

Read on to see what happened and let us know what you think in the comments.

AITA for making my 15-year-old daughter get a job to pay for our dog’s vet bills?

We were in the middle of a heat wave 2 weeks ago with temperatures hitting 107. Small dogs are more sensitive to heat so we don’t let him go to the backyard for long periods of time and the deck is off limits because there’s no shade on the deck.

The problem is Pebble loves the deck because he can watch the cars, people walking on the trail behind our house, and he can see our neighbor’s chickens.

Janie doesn’t have first period and doesn’t leave for school until 10 a few days a week. Both Allie and Phoebe leave between 9-9:30 so it’s Janie’s responsibility to make sure Pebble is inside, the fans are on, and he has water.

2 weeks ago in the worst of the heat wave, Pebble was crying at the deck door. Janie got annoyed and let him go on the deck. Then she left for school and forgot him on the deck.

Allie came home a few hours later and started looking for Pebble. She found him passed out on the deck and called me sobbing. I left work early, took him to the emergency vet, they treated him for heat stroke.

He had to stay at the vet for a few days and Allie was inconsolable while he was gone. She was constantly crying, she wouldn’t eat or leave her room, and she had a panic attack every time the phone rang because she was terrified that it was the vet telling us that pebble was gone.

Pebble made a full recovery but now we have an expensive vet bill and Allie still has extreme anxiety around losing Pebble. Janie’s upset because Allie hasn’t spoken to her since she forgot Pebble on the deck and Phoebe rarely speaks to her and doesn’t hang out with her anymore. Janie was upset about Pebble when he was in the vet but now she’s very nonchalant about what happened because he’s fine.

My husband and I have been talking about what to do with Janie. We decided on making her get a job to pay for Pebble’s vet expenses (close to $2,000 after insurance). Janie’s very upset about it because she has to quit swim team to get a job and says that we’re ruining her life over a mistake.

Now I’m starting to wonder if I’m the a**hole for making her quit swim team to get a job.

One person said this mom is NTA and her daughter knew better than to do this to the dog. 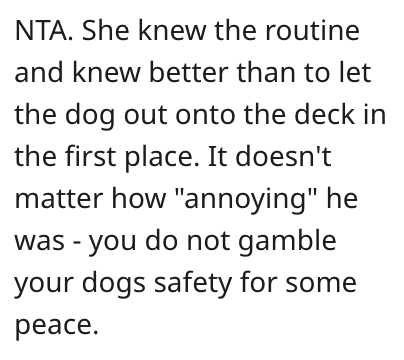 And another individual agreed and said she should get a job to help pay for the vet bill.

And this Reddit user said this is a painful mistake to make but she has to fix it. 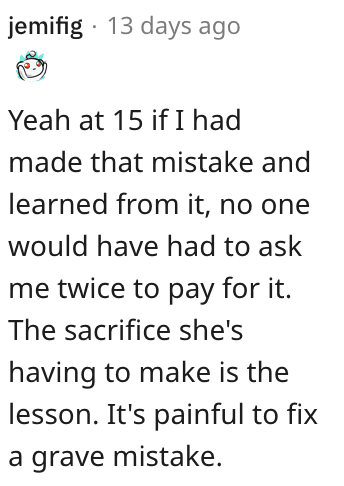