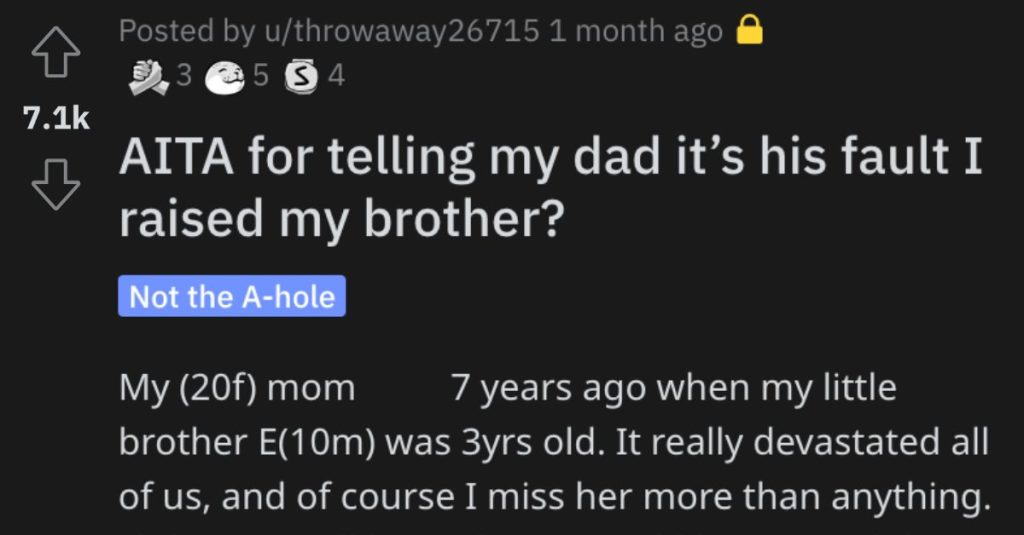 She Told Her Dad It’s His Fault She Had to Raise Her Brother. Was She Wrong?

This is all your fault, dad!

That doesn’t sound good, does it?

Well, it happens from time to time…

And this woman wants to know if she’s out of line for telling her dad that it’s his fault that she had to raise her brother.

AITA for telling my dad it’s his fault I raised my brother?

“My (20f) mom d**d 7 years ago when my little brother E(10m) was 3yrs old. It really devastated all of us, and of course I miss her more than anything. If she was still here, things would be so much better than they currently are.

Her d**th really destroyed my dad, he just became really withdrawn and pretty much only focused on going to work and coming home. He fell back on taking care of E so I started doing it instead. I would miss out on school dances, social events, award ceremonies, etc. to take care of my brother.

I stopped even trying to go out, bc when I did, my dad would always ask me to cancel plans to look after E anyway. I was supposed to go out of state for college, but bc I knew my brother would end up having to fend for himself, I picked local school instead.

I still live at home and even work from there so that I can help out too. Ive tried not to be upset about it too much, bc my father lost his wife and I know that he’s hurting, but I just wish I could do something other than be my brother’s parent.

School started up again for my brother recently, and while I was making dinner he took a flyer out of his backpack and gave it to me. It was a notice about a ‘meet the teacher’ night. He was telling me all about the other details of it when our dad walked in the kitchen and asked what was going on.

My little brother kind of dismissed him and told him it was just between the two of us, but maybe he’d talk to him about it later. The topic was switched after that and my brother didn’t bring it up again before he went to bed so I didn’t really think anything else of it.

We did the whole teacher night thing, which I informed my dad of via text, and when we got back home my dad sent my brother upstairs bc he wanted to talk to me. He told me that I need to tell my brother that I am not the one he should be asking about important school stuff because I’m not his mother, and I’m definitely not his parent.

He said it was disrespectful of me to even take E to the event in the first place, but especially malicious for me to let my brother continue acting as though I am his mom. The whole thing just p**sed me off.

I told my dad that it’s his fault my brother views me that way to begin with because he clearly wasn’t up to doing the job after our mom d**d, and that the only person he should be upset at is himself for making his grieving daughter take up all of the duties that he fell short on after the d**th of his wife.

I told a friend what happened, and she does think I’m right, but she also thinks it was cruel of me to say it like that to my dad bc clearly he’s still hurting. Now I’m not sure if I was being an a**hole.”

Now let’s see what Reddit users had to say about this story.

This reader said she’s NTA and that her dad needed a wake-up call. 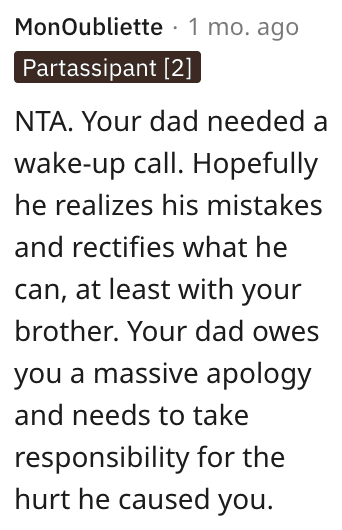 And this individual agreed and said it sounds like her dad needs some grief therapy.

And this reader said she’s NTA and that her dad dropped the ball for years. 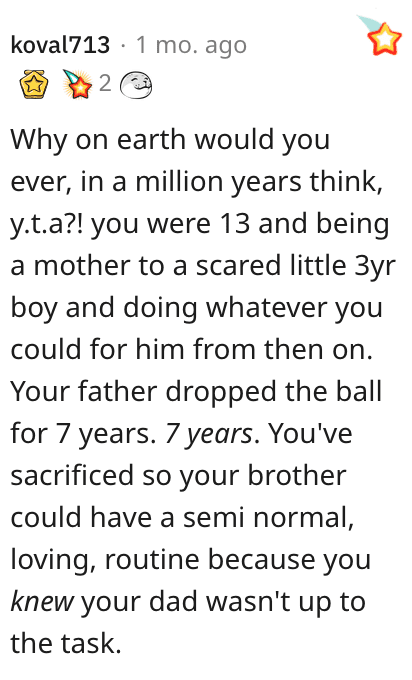