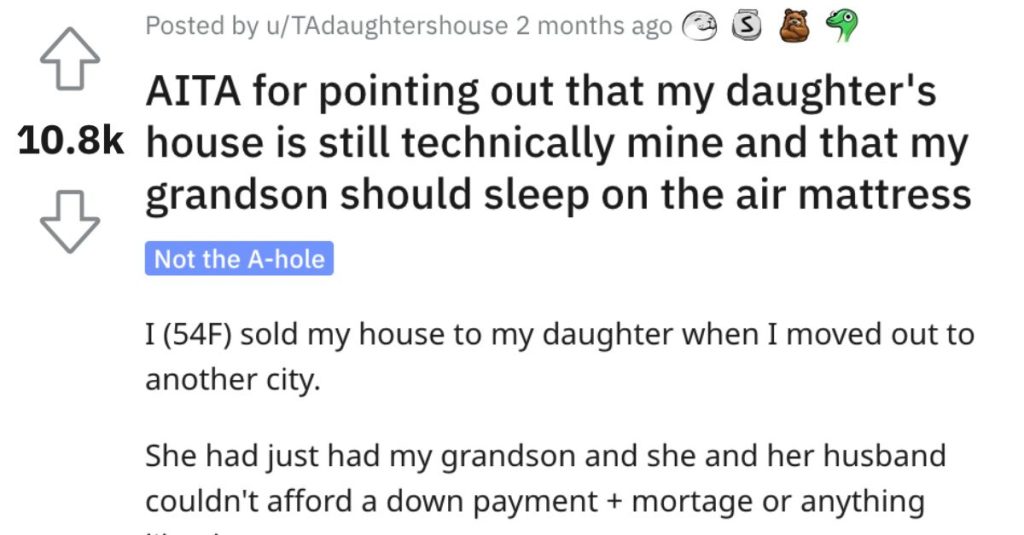 She Pointed Out to Her Daughter That the House Is Still Technically Hers. Did She Act Like a Jerk?

This is my house!

And I will do as I please…

Uh oh…sounds like this situation is about to go off the rails!

AITA for pointing out that my daughter’s house is still technically mine and that my grandson should sleep on the air mattress?

“I (54F) sold my house to my daughter when I moved out to another city.

She had just had my grandson and she and her husband couldn’t afford a down payment + mortgage or anything like that.

Our agreement is for her to pay me monthly over 15 years and there would be no fees for that. Part of our agreement is that the house will be in her name when she pays me in full and I will be able to use the guest room 2x a year (2-3 days) even if they are not home at that time.

They agreed, because nowhere would they accept this deal without extremely high fees, plus the house was nice. All of this in a contract protecting both parties.

It’s always the same dates, my aunt and mother’s birthday and another annual event in the city that I love.

When visiting, I try not to disturb and not cause a mess, but it’s not worth staying in a hotel, because it’s expensive (tourist region)

It’s been five years and my daughter had my other two grandchildren (4M and 2F).

I was recently talking to my daughter and I remembered that I would be staying at her house for 2 days for the city event.

She seemed quiet and started saying that the boys wanted their own rooms and ended up giving the guest room to the oldest (6M), so there was no room for me and she thinks it’s unfair to have to ask him to sleep on the mattress with his own ro. So I had the option of sleeping on the mattress or paying for the hotel.

I asked if the bed was still the same as in the guest room. She said yes and when I asked if she would pay for my hotel she said no.

Btw, I have a Lot of pain back and would end me sleeping on the mattress (she knows that).

I was disappointed and said I thought it was disrespectful for her to even mention these options to me when we have our agreement.

She started saying that it was her house and she could decide who would sleep where because of that.

This bothered me and I reminded her that the house is still technically mine until she pays me the full amount and that our agreement was that I could use the guest room 2x a year and that my grandson is young, does not have back pain that would not get worse if he sleeps on the maitress.

She still angry that if I have to sleep in the hotel, she will have to pay.

One person said she’s NTA and pointed out that she’s only visiting for two days!

Another reader agreed and said they’d always give up their bed voluntarily. 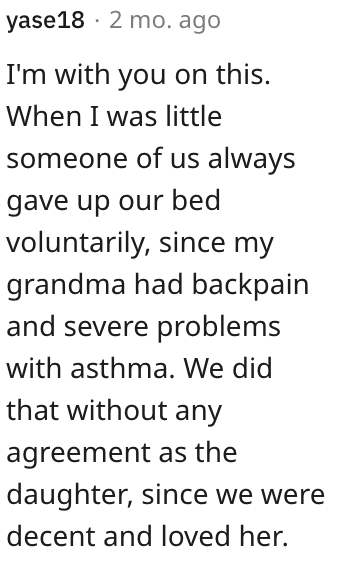 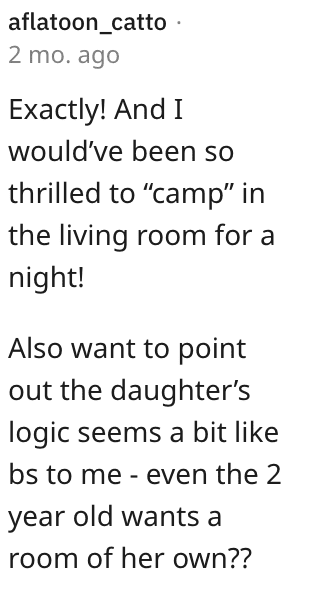