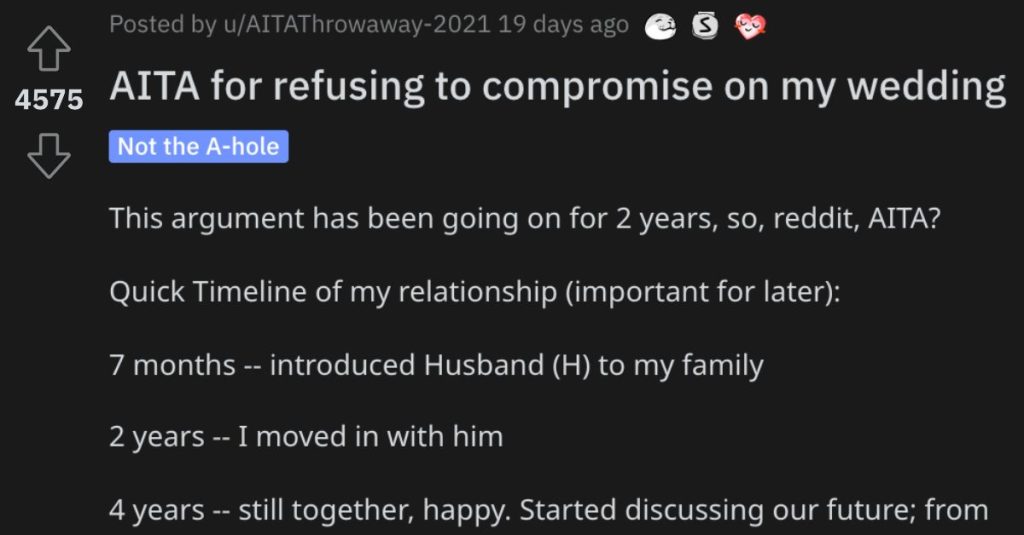 She Refuses to Compromise on Her Wedding. Is She Acting Like a Jerk?

If there’s one thing that humans should have learned by now, it’s not to mess with a woman when it comes to what’s gonna happen during her wedding day.

But some people never learn, do they…?

Check out this story from Reddit’s “Am I The A**hole?” page about a woman who’s having some serious issues about her upcoming wedding day.

Is she wrong for feeling the way she does? We’ll see…

AITA for refusing to compromise on my wedding?

“This argument has been going on for 2 years, so, reddit, AITA?

Quick Timeline of my relationship (important for later):

4 years — still together, happy. Started discussing our future; from children, potential moving states, etc. We agreed on everything, but decided we weren’t ready for marriage just yet.

5 years — he proposed to me on vacation together. I said yes. We decided it would be best to wait a while before planning to make sure that the engagement didn’t change our relationship.

Cost wasn’t an issue in any way, (H makes 6 figures while I make high 5 figures), plus we saved up for the wedding in the year & a half that we were testing waters & we have no withstanding debts.

So, H was determined to make sure we had the wedding of my Pinterest board dreams even when I told him I’d be happy regardless of the wedding, as long as we were married by the end.

My Mother (M), wanted a smaller wedding with only parents & siblings invited, having her old wedding dress tailored to fit me (it wasn’t my style, and won’t go up past my thighs or down over my boobs), having the wedding in her 10m2 backyard.

I didn’t think it was showing off; especially seeing as it’s a wedding H and I wanted for ourselves and could afford. I also didn’t see getting married as a bad thing, because we’d been together for so long and wanted to officiate our commitment & love for each other.

After I came back from my honeymoon (which M also tried to talk me out of because it was overseas); I found out M was talking s**t about the wedding both during the reception and after the reception.

When I tried to talk with all my family, they thought M was right because weddings are a waste of money (admittedly, they are but it’s a day that I’ll honestly never forget regardless because it was exactly how I always pictured it and H did an amazing job with everything).

They basically called me a gold-digger, said this whole relationship was a rushed (rushed despite the years together?!) way to get my H’s money, they said that H & I needlessly wasted money i.e. on new cars (1 each in the past 4 years), & that I was nothing more than a trophy wife.

In the heat of the moment, my sister revealed that she ‘borrowed’ my ring to have it valued & told everyone how much my H spent, which my family determined was just too much spent.

At first, I thought they were all in the wrong for shaming H & I for our choices but this argument has come up so often that I’m left wondering if maybe I am the a**hole for not considering how an expensive wedding would make my family feel seeing as they can’t afford similar.”

Let’s take a look at how readers reacted to this story.

This person said the whole thing boils down to jealousy. 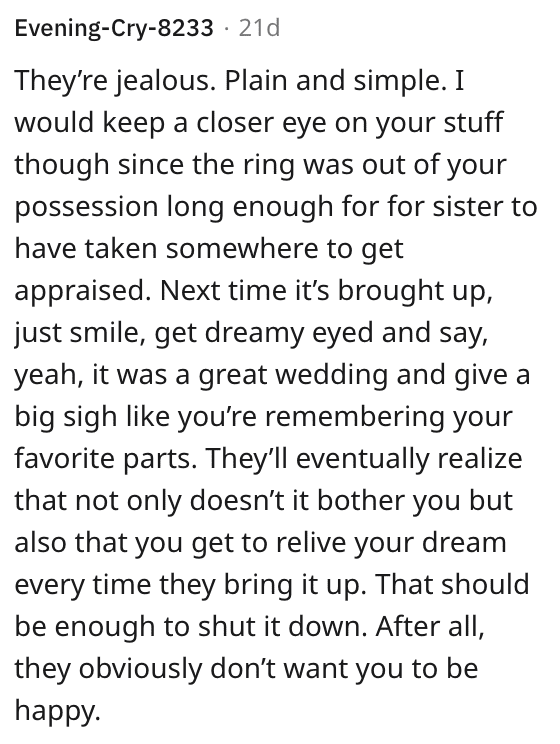 Another reader said that she needs to get the ring re-appraised.

This Reddit user said that the woman who wrote the post is definitely not the a**hole here and that she really needs to set boundaries with these people. 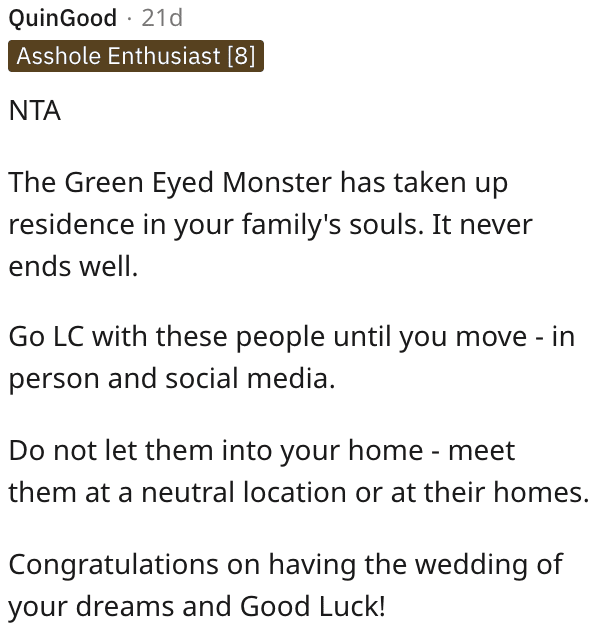 And finally, this individual was AGHAST.

And they made a good point: families are supposed to support each other. 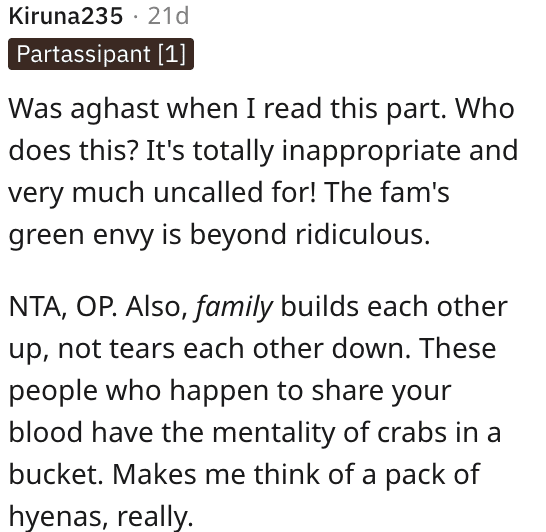