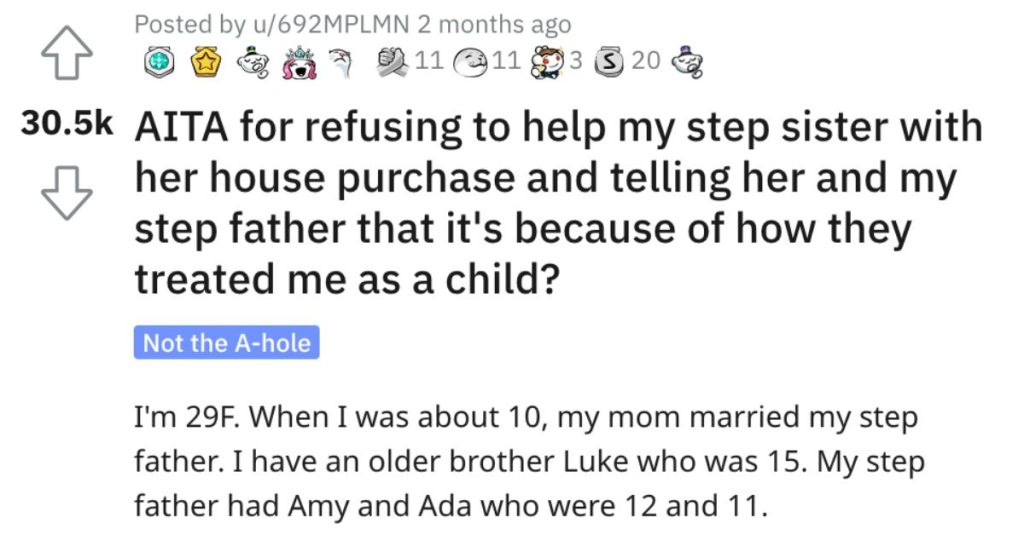 She Refuses to Help Out Her Stepsister With Her House Purchase. Is She Wrong?

We’d all like to help out our family members as much as we can…but sometimes you have to put your foot down and refuse.

And today we’re going to hear from a woman who wants to know if she’s an a**hole for not helping out her stepsister with her house purchase.

Read her story below and see if you think she’s out of line.

AITA for refusing to help my stepsister with her house purchase and telling her and my stepfather that it’s because of how they treated me as a child?

We didn’t come from a privileged background, my mum was a min wage worker and my dad was absent. Our step father had a very good income. Their deal was that they wouldn’t combine finances, and they would each contribute equally to the household, and then each takes care of their children with their spare money.

So my mum never had anything for us, and my step father was spending big on his kids. This included holidays which Luke and I were excluded from (step father would pay for mum, but not us).

Luke and I also shared a room even though Amy and Ada had their own rooms and we had a guest room, because step father insisted that he was paying more towards the house so my mum’s share would only get her one room for the kids.

Luke and I were constantly teased for this situation by the three of them as we grew up. My mum always said that we should be thankful because if it wasn’t for our step father we would not be living in a nice home in a good neighborhood.

Anyway, Luke and I became determined to be able to take care of ourselves so that we wouldn’t need to take nonsense from anyone. We have both done quite well with our careers and finances and we are in a very good place. Since turning 18 and moving out my relationship with the three of them has been very limited. I wouldn’t call us friends, but we can exist peacefully if we are in the same place.

I visited my mum recently and my step father mentioned that Amy wants to buy a house now that she’s pregnant. He asked me if I’m able to help out a little with the deposit. The house is £500k and she needs a £150k deposit.

I said no. He insisted that Luke and I both own our houses outright and with our incomes so we should be able to help. I said whether I can or not is irrelevant, my answer is no.

He reminded me that Luke and I each gave £10k to our cousin for buying a house as a gift, Amy is my sister and he’s offering to pay us back. I said that was our choice then, this is my choice now. He insisted that we should be willing to help out our family if we’re able to, I replied back “like how you helped me and Luke when we were kids?”

Everyone just went quiet when I said this. After a while, he said if we went back in time he’d have done things differently, treated all four of us equally. I said that’s good of you but doesn’t make you entitled to my money now. He said he knows he’s not entitled, that’s why he’s asking and promising to pay it back, I said the answer still is no, not entitled to a loan either.

My mum later told me I could have turned him down without being an a**hole or bringing up childhood which he already feels guilty about. AITA?”

Check out how folks reacted to this story on Reddit. 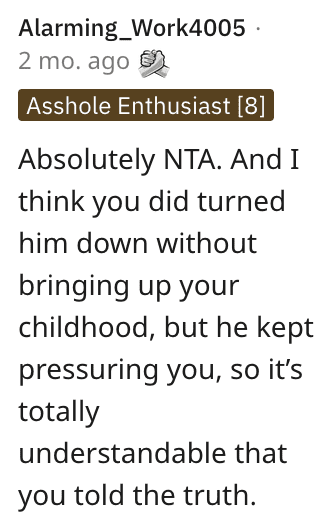 And this Reddit user said that her stepfather only regrets the way he acted because she’s successful now. 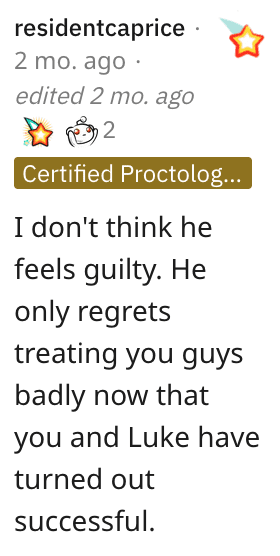 And another individual said she’s NTA and her family has some bizarre reasonings going on in their heads.