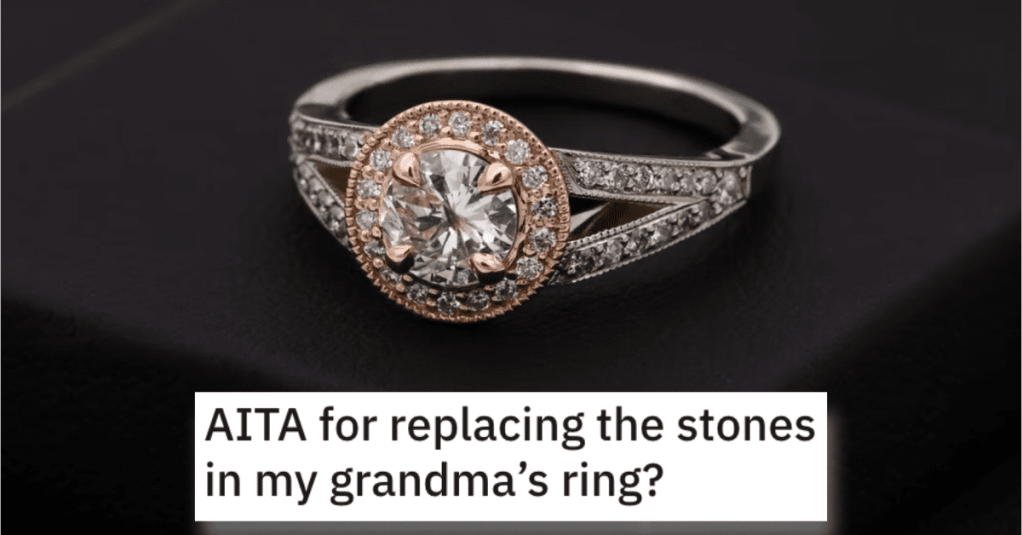 She Replaced the Stones in Their Grandma’s Ring. Is She Wrong?

People tend to get pretty worked up about family heirlooms, don’t they?

And a person took to Reddit’s “Am I the A**hole?” page to see if they were wrong for altering their grandmother’s ring.

Let’s see how it all went down.

AITA for replacing the stones in my grandma’s ring?

“My grandma passed away ten years ago, and when her estate was settled, I ended up with her wedding ring. She didn’t leave it to me specifically, but that’s the way things turned out. It fits me, but I was already married at the time of her passing.

When I got the ring, that was the first time I’d ever seen it. I was close with grandma, but never knew her to wear any jewelry. She must have worn it a lot at some point though, because the center stone and one of the side stones had fallen out. It made me sad to see it that way, and my first thought at the time was to save and buy new stones for it so it could look new again.

My husband said I shouldn’t, because since I already have a wedding ring, this one isn’t really mine to keep or wear. One of our future kids might want to use it as a wedding ring and pick out their own stones.

The ring sat in my drawer for ten years and just recently I decided to go for it anyway. We do have kids now, but there’s no telling if they’ll ever get married, or if they’ll want to use this ring when they do. They never even met my grandma, so why would they?

It’d be more appealing to them with the stones in it anyway. So I had it restored. The stones are fairly small compared to modern rings, so the price wasn’t a dealbreaker for our family. It was on par with any other gift I might have picked up for myself at Christmas.

My husband is annoyed and says I’m selfish for choosing to enjoy the ring myself instead of saving it for others. But it’s a ring, not a pie. It’ll still be around in 20 years if one of the kids want it when they get engaged.

I can’t believe I have to ask, but is there any way he’s right and I’m the a**hole here?”

This person said that the woman’s husband is being a weirdo about this. Straight up! 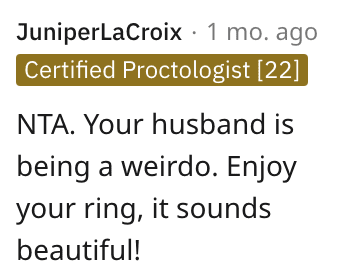 And this Reddit user said it’s her ring so she can do what she wants with it. 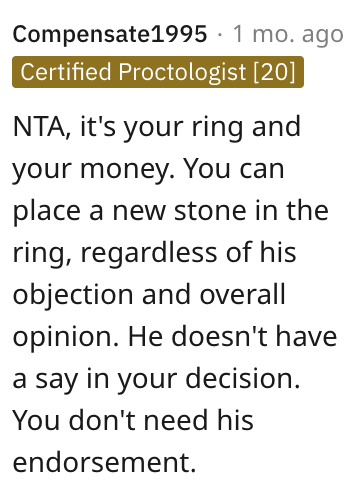 Another individual had a different take on the story. 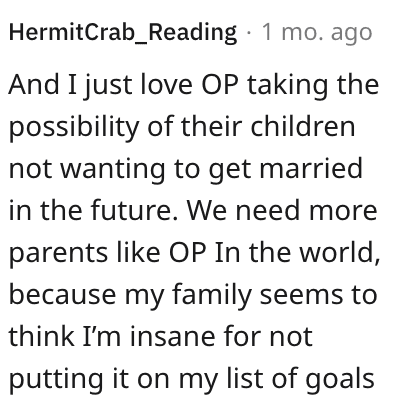