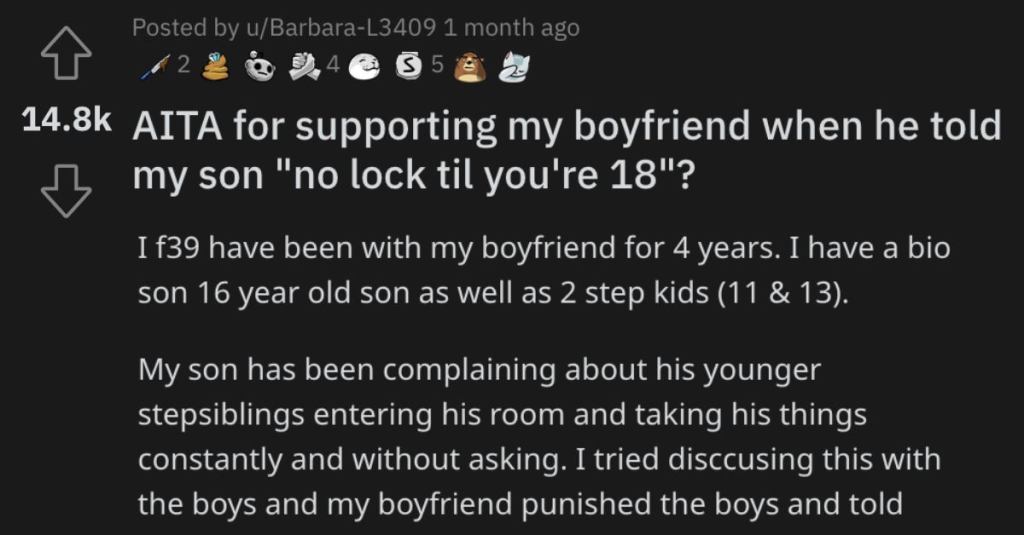 She Sided With Her Boyfriend Instead of Her Teenage Son. Was She Wrong?

Did you grow up in one of those houses where kids weren’t allowed to lock their doors?

I didn’t, but I had friends whose parents forbade it…and I always thought it was kind of weird.

So, in the spirit of outlawing locks for kids, take a look at this story from Reddit’s “Am I the A**hole?” page and see if you think this parent is doing the wrong thing.

AITA for supporting my boyfriend when he told my son “no lock til you’re 18”?

My son has been complaining about his younger stepsiblings entering his room and taking his things constantly and without asking. I tried disccusing this with the boys and my boyfriend punished the boys and told them to ask first before taking anything and return it if taken but my son said they haven’t listened and things went back to how they were.

Few days ago my son came downstairs saying his older stepbrother broke his controller and put it back and told him he returned it like his dad told him but the controller was broken. I again went to my boyfriend with this issue and had my son sit and talk directly to him.

My son asked him if he could just get a lock for his room to resolve this issue but my boyfriend didn’t welcome the idea and told him no because locks bring troubles to his house but my son tried to convince him and assured him that he won’t use the lock when he’s home but only when he’s at school or working. My boyfriend still said no and then told him “no lock until you’re 18, period, no more discussion”.

Thing is my son will still be living with us because he decided to go to a community college and my boyfriend told him when he reaches 18 that is when he gets to get a lock and start paying rent and no one will bother him.

My son begged me to say something since he couldn’t take it anymore after his controller was broken but I agreed with my boyfriend that as the owner of the house he gets final say and no lock means no luck. however, the boys will be facing stricter punishments to enforce the “no touching others stuff” rule but my son was having none of it and started yelling at me and my boyfriend saying his stepbrothers will never respect his privacy and his stuff nomatter how hard their punshement is since they never learn and are stubborn and will always do what they want.

He picked an argument with my boyfriend after my boyfriend said he’ll pay for the controller and then my son called me awful for siding with him and refusing to see the blatant injustice in this house and told us he’s reconsidering staying with us after 18.

He keeps saying I’m not on his side cause if I was I’d be encouraging him set boundaries and protect his stuff that he buys with his own money. I reminded him of how much my boyfriend helped us (we lost our apartment to debts and my boyfriend took us in 2 years ago we had nowhere to go) and let him know he’s doing his best to hold the boys accountable.”

One person said that this woman is indeed the a**hole in this story. 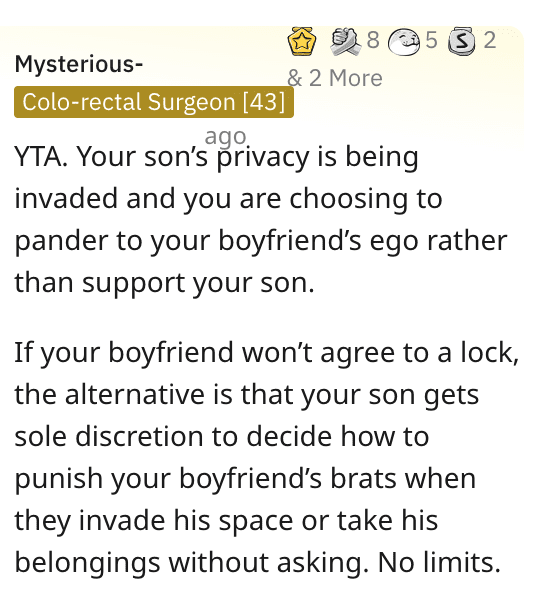 And another Reddit user said that parents shouldn’t do this. Period. 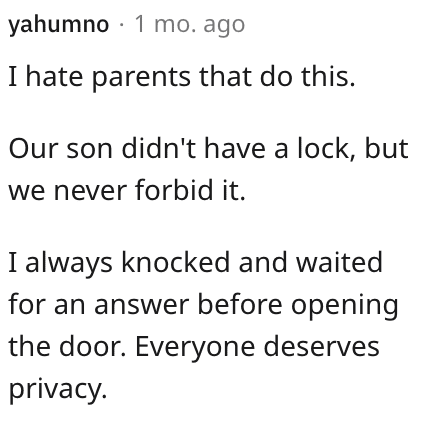 And this reader said that it sounds like the woman’s boyfriend is on a bit of a power trip. 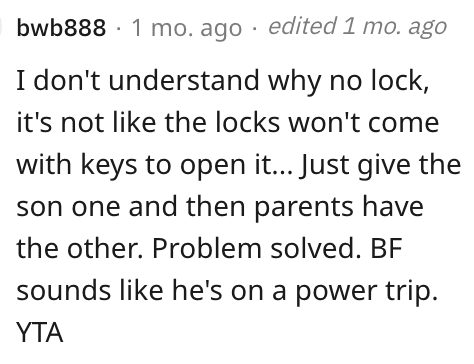 Tell us what you think about this story in the comments!