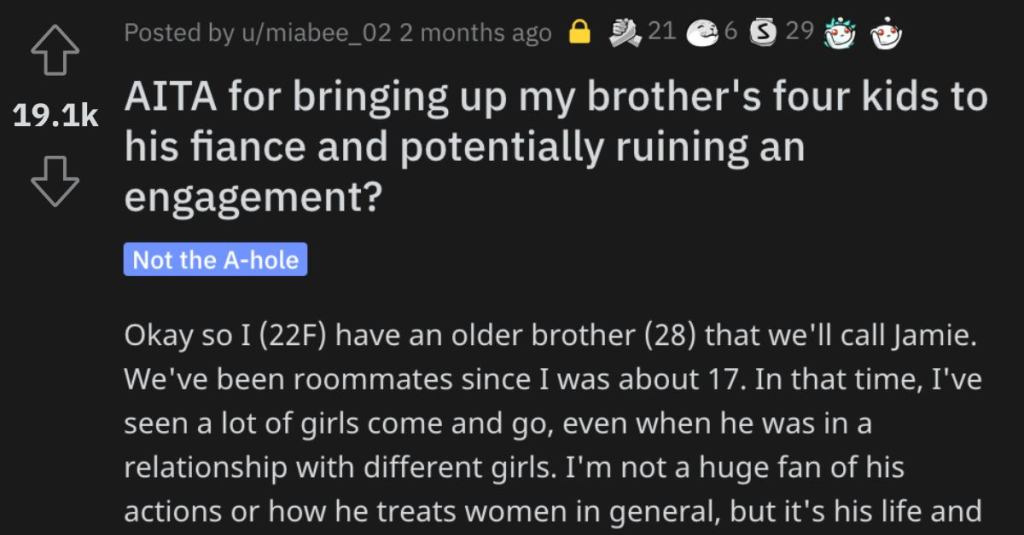 She Told Her Brother’s Fiancee About His Four Kids. Was She Wrong?

But we live in a crazy world where people do crazy things!

Check out this story and see if you think this woman was out of line with how she acted toward her brother.

AITA for bringing up my brother’s four kids to his fiancee and potentially ruining an engagement?

In that time, I’ve seen a lot of girls come and go, even when he was in a relationship with different girls. I’m not a huge fan of his actions or how he treats women in general, but it’s his life and he’s free to mess it up as much as he wants so I turn a blind eye to it.

He has four kids. His oldest daughter is 10 and is the only one that he actually pays any child support on, but he rarely sees her. The other two are twin boys (4) that he has with one of my close friends. She didn’t take him to court, so I do my best to provide for them if she needs help.

His son I don’t really know much about. I think he’s around 8? He doesn’t want kids and doesn’t see them but maybe a handful of times around the year and doesn’t see his 8 year old son at all. He calls the ones he has “accidents” and has said before that he wishes he hadn’t had them because he gets irritated when their mothers call him.

So essentially what happened was 3 years ago, Jamie met a girl named Natalie and they immediately hit it off. She’s moved into our apartment and I like her well enough. With his habits, I didn’t expect her to last very long, but she surprised us both. Since I planned on moving out in a few months, she’d been talking about renovating my room and all sorts of stuff they could do with the space. She even laughingly said that “maybe it could be a nursery”. I thought it was a joke and brushed it off.

Well, a couple weeks ago, while I was out at dinner with my friends, he had decorated the apartment and proposed to her. I congratulated them and didn’t have any problems with this until a few nights ago when we were all drinking and talking.

Natalie was gushing about her plans for the wedding and her bridesmaids and her new ring. Here’s what went wrong. She mentioned how she wanted kids as soon as she could and how she could see my brother being the best dad.

I started laughing. Basically what I said was: “He hasn’t been the best dad to the four he has now.”

She asked what I meant and my brother started to freak out. I realized she didn’t know and explained how he wasn’t raising his kids and how he didn’t even want to see them and didn’t want kids at all. Apparently he hadn’t told her about any of this.

My brother was drunk and started yelling so I called a friend and left. I stayed away a day or two and he blew up my phone. I guess he and Natalie are fighting horribly and he blamed me for it. I ruined his engagement and I’m an AH for telling her as it “should’ve been his choice to tell her about the kids”. Our parents agree with him and haven’t been talking to me.

Honestly I feel like I warned her before things got too serious, even if it wasn’t deliberate. He should’ve told her before about them. So AITA here?”

One reader said that the brother is definitely to blame here. 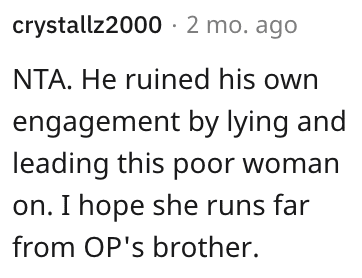 And another Reddit user said that he was probably NEVER going to tell this poor woman. 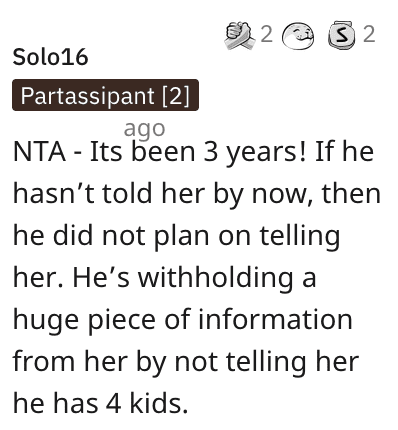 This individual said this woman is NTA and that it’s a good thing this woman got out of this situation before they decided to have kids. 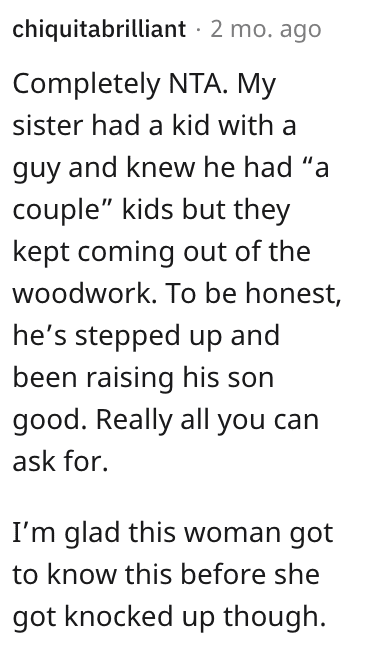