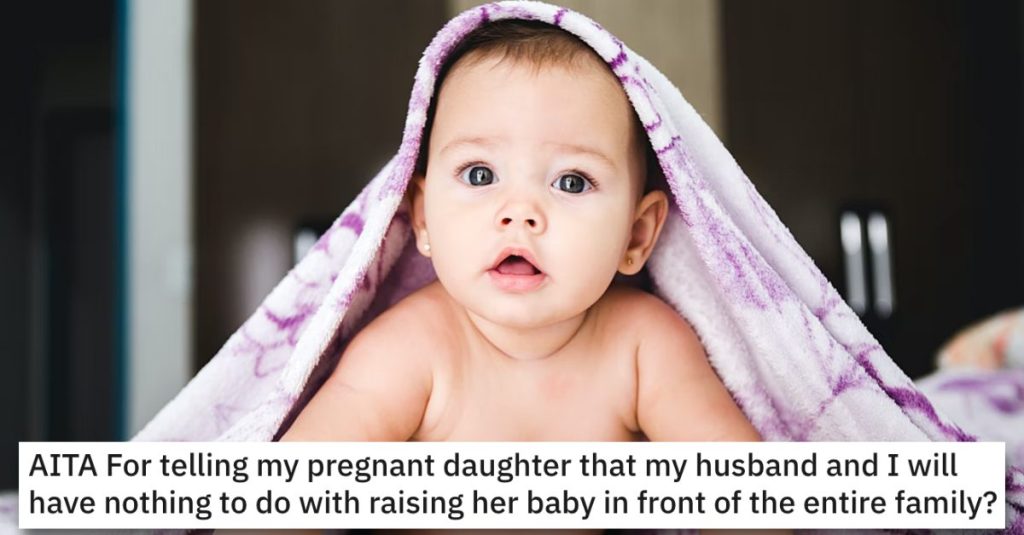 She Told Her Daughter She Won’t Help Her Raise Her Baby. Was She Wrong?

We’re back with another story of major family drama!

Was this woman wrong for telling her daughter she won’t help her raise her baby?

Let’s get all the details in the post below.

AITA for telling my pregnant daughter that my husband and I will have nothing to do with raising her baby in front of the entire family?

“Hello, I am a fifty-six-year-old mother to thirty-three-year-old Kelly and grandmother to sixteen-year-old Opal. Kelly became pregnant with Opal at sixteen. My husband, Eddy, and I have always believed in having the right to choose. However, Kelly insisted that she wanted to keep the baby and not give it up for adoption.

We helped a lot as Kelly was only seventeen when Opal was born. However, Kelly would rarely help with parenting even when she was available. Even asking her to watch Opal for an hour while we ran errands was an issue. It was rare that Kelly wouldn’t complain about why she “had to be there” to look after Opal.

Kelly chose not to attend college after graduation. She had a job with a flexible schedule, yet she rarely made herself available for Opal. Kelly was only home to sleep or get dressed for some party. She also relied on us to purchase supplies and book appointments for Opal. Eddy and I would have serious talks with Kelly that she needed to step up as a parent. Kelly would only make empty promises and never follow through on them.

Kelly moved out when Opal was six. Kelly comes around maybe once a fortnight and for holidays, but Eddy and I have been the ones to raise Opal. Opal is doing extremely well. She has good friends, plays Tennis, participates in volunteer projects, and plans to be a marine biologist after graduation.

The school year ended for Opal last week, so we had a nice dinner to celebrate her good grades. Kelly came, along with several other family members. We were all chatting and enjoying dinner together when Kelly stood up to make an announcement. She announced to us that she was pregnant with her boyfriend’s child.

We already were upset because this was supposed to be Opal’s special moment and Kelly announcing her pregnancy was completely inappropriate. Eddy and I said nothing, and Kelly started to say how she and her boyfriend were “so busy!” with life right now.

Eddy and I interrupted Kelly and told her we would have nothing to do with raising this new baby and would not be providing anything for it (supplies, childcare, etc.) Kelly flipped out and an argument ensued.

Kelly called us heartless and claimed we were willing to throw our grandchild away. Eddy and I called her selfish for expecting us to raise another child. We are too old to raise a baby. Kelly is thirty-three and needs to grow up. Give the baby up for adoption or be a parent and raise it yourself.

Kelly left in tears. Now the family has broken into “sides.” The ones agreeing with Kelly say that we adopted Opal and are sending a message that we don’t care about our newest grandchild. Others are saying we should have taken her aside privately instead of shooting her down in front of everyone and our reaction was cruel. Eddy and I feel we had to be blunt with Kelly and not sugarcoat reality.

Opal likes to show us stories from here sometimes, so I thought it would be a good place to ask for a neutral perspective. AITA?”

Here’s what Reddit users had to say about what happened.

One person said they don’t think she should have even announced that she was pregnant.

And another reader made a good point: where are the fathers in this story? 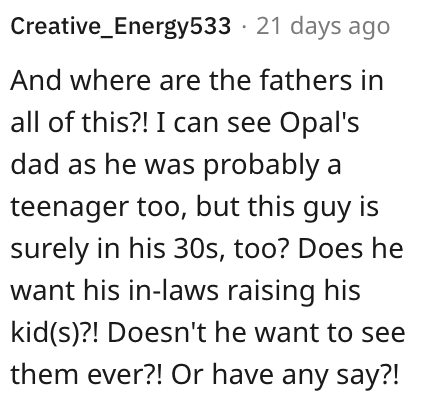 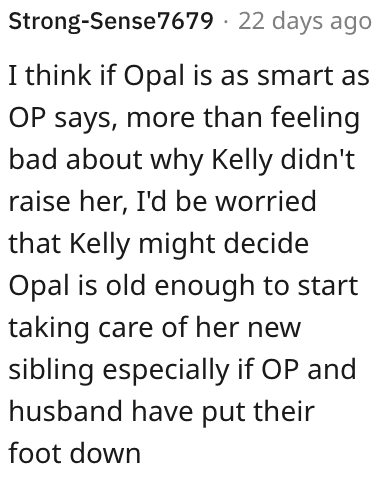