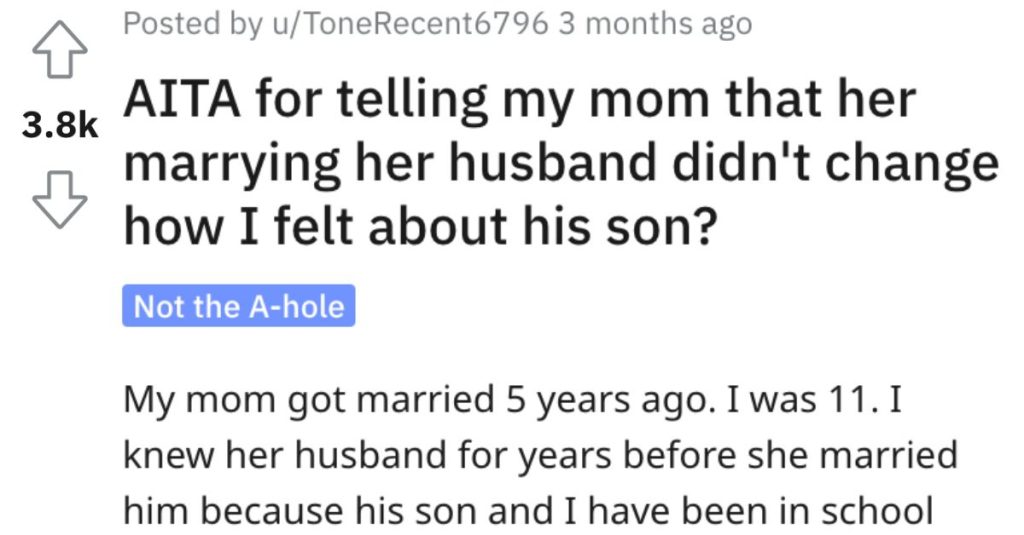 She Told Her Mom She Still Doesn’t Like Her Stepbrother. Is She Wrong?

No matter what you do, I’m still not going to like that person…

That doesn’t sound good, does it?

But is this teenager a jerk for what she said to her mom?

Check out her story and see what you think.

AITA for telling my mom that her marrying her husband didn’t change how I felt about his son?

I knew her husband for years before she married him because his son and I have been in school together since kindergarten. I don’t like his son. Never did.

My mom and her husband over the years have tried to make the four of us a family. They have spent a lot of money and time trying to create these bonding moments and memories to look back on fondly but my favorite part of all those moments was spending time with my mom, not her husband’s son. I still wouldn’t call him family or my sibling. I wouldn’t call him a friend either.

Ever since April his friends and him have seen each other way less, because his dad and some of his friends parents are clamping down on the friendships hoping they will end up being better people and less influenced to go with the crowd.

My mom and her husband have tried to encourage us to spend more time together. I have been asked to include him with my friends. He’s been encouraged to apologize to people and try to make other friends. He’s done none of that. I have been pretty clear with my mom that my friends and I are not interested in including someone like him.

My friends and I have Halloween plans and my mom was looking for me to include him, because he has none, and he was trying to meet up with his friends secretly. I told my mom there was no way I would let him ruin mine and my friends plans.

She told me it would be a big thing for him to have someone like me to introduce him to a different crowd, a kinder crowd. She talked about us being family, being brothers. I told her that just because she married his dad, didn’t mean I started to care about him or like him, I told her it only made us family in the sense that we lived together, but we would never be family like she wanted.

She told me she was disappointed in me for not giving him a chance. She said if I would just try I could be really surprised. That family is important. Caring about people too. Apparently her husband has had the same conversation with his son many times. She didn’t with me for so long because she hoped I would soften with time and open myself up to trying at some point.

One reader said she’s NTA and her mom needs to start caring about her. 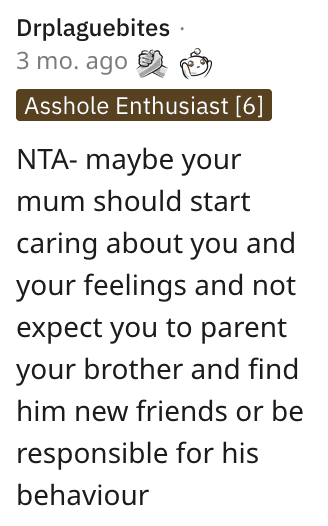 And this Reddit user said it sounds like they expect her to do all the hard work. 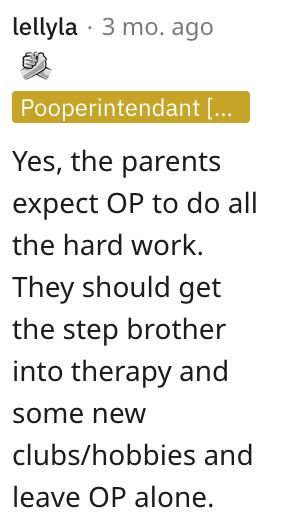 Another individual pointed out how ridiculous this whole thing is…