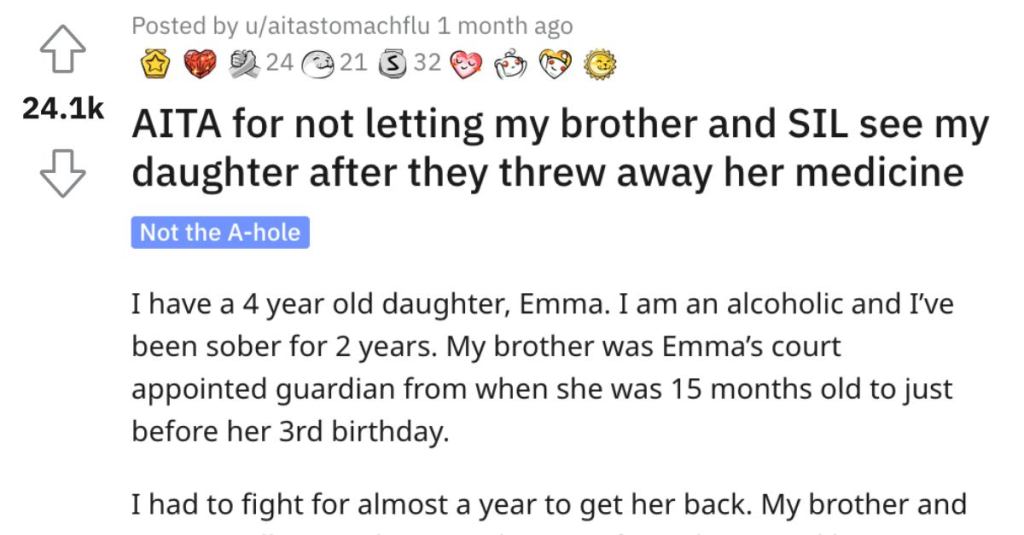 She Won’t Let Her Brother and Sister-In-Law See Her Daughter. Is She Wrong?

I see a lot of stories out there about people refusing to let certain family members even see their children.

That’s when you know things are pretty bad, folks.

And the sad state of things is that it seems like this happens quite a bit…but everyone has their reasons for doing those kinds of things, right?

Check out this story and see if you think this woman went too far.

AITA for not letting my brother and SIL see my daughter after they threw away her medicine?

“I have a 4 year old daughter, Emma. I am an al**holic and I’ve been sober for 2 years. My brother was Emma’s court appointed guardian from when she was 15 months old to just before her 3rd birthday.

I had to fight for almost a year to get her back. My brother and SIL are still upset that I “took Emma from them” and have called CPS on me numerous times and make it clear that they don’t trust me to take care of my own kid.

They love Emma and Emma loves them so I try to take her to see them a couple times a month.

A couple weeks ago, Emma caught the stomach flu from someone at her preschool. I’m in school full time and had a midterm that day so I asked my brother to watch her for a couple hours so I could take my test. They said they were happy to take her so I brought her to their house that morning with her medicines, a schedule saying when she’s supposed to take which medicine and the dosage, a bottle of pedialyte, and a few changes of clothes.

I came to pick her up after the midterm and half her medicines, her clothes, and her pedialyte were gone. When I asked about it they said they threw away all of her medicines and the pedialyte because they were liquids and they were already opened so I could’ve put something in there to make her sick/sleep (not that it helps much but I never hurt my daughter or gave her anything that wasn’t recommended by her pediatrician). They also said I shouldn’t be giving her Tylenol and Motrin (again, her doctor said it’s fine) so they didn’t buy her any Motrin.

Then I asked about the nausea medicine (prescription) and they said they didn’t think she needs prescription meds for the stomach flu.

They also felt her clothes weren’t good enough for her so they gave it to their neighbor for their garage sale and bought her new clothes, meaning they most likely took her shopping when she was sick and should’ve been resting.

I left with Emma and haven’t spoken to them since except to tell them they will not be allowed anywhere near my kid unsupervised.

I’m working on thanksgiving so I was going to drop Emma off with my parents so she could see my family but I still don’t want her to be around them without me so I’m leaving her with her babysitter instead.

Now my family is giving me a hard time for not letting my brother and SIL see Emma and are excusing what they did by saying they were just worried about her.

AITA for not letting my daughter see my brother and SIL?”

Now let’s take a look at what Reddit users had to say.

One reader said that it sounds like these two are sabotaging this person’s recovery. 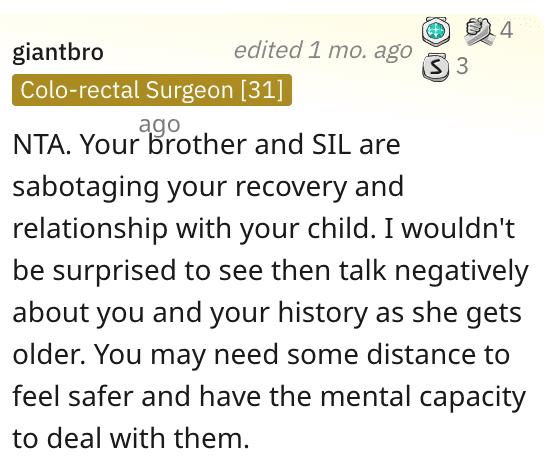 And another Reddit user said that this person shouldn’t let anyone know they’re moving, just to be on the safe side. 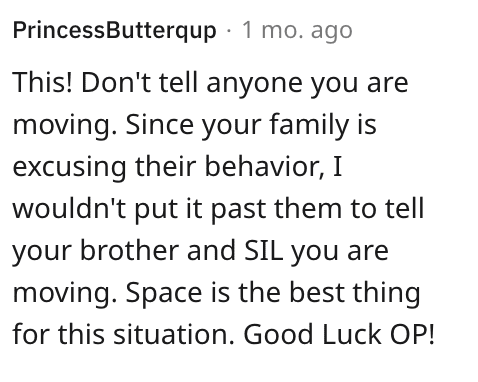 This individual agreed and said they shouldn’t give their family their new address. 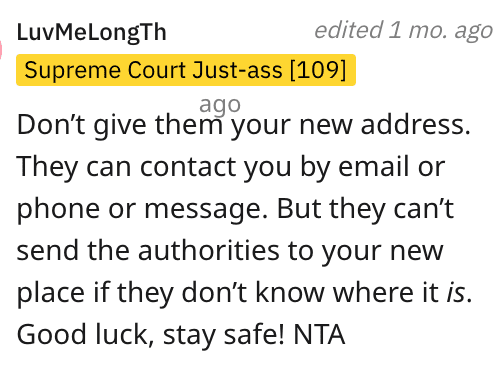 Lastly, this reader said that this person needs to play it cool before they leave so no one will be tipped off that they’ll be leaving. 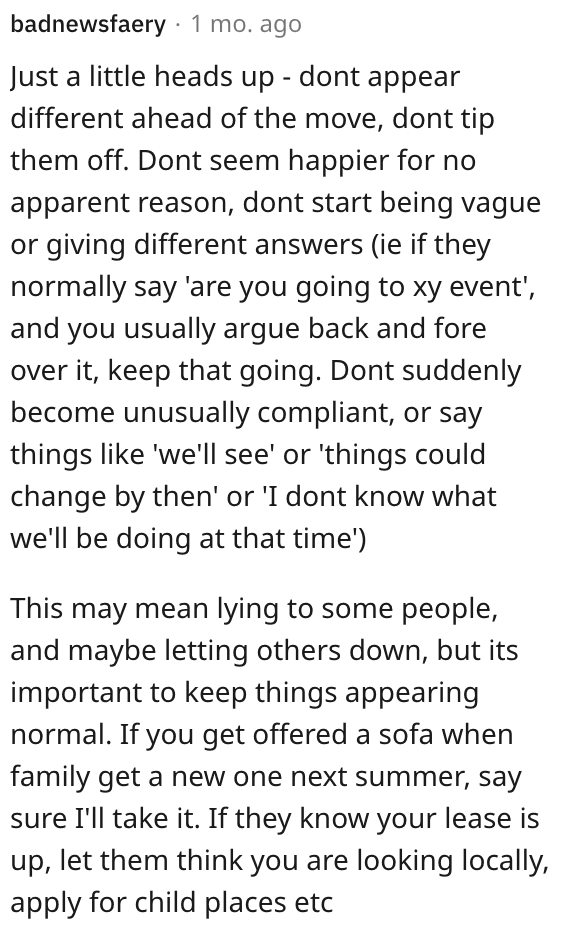