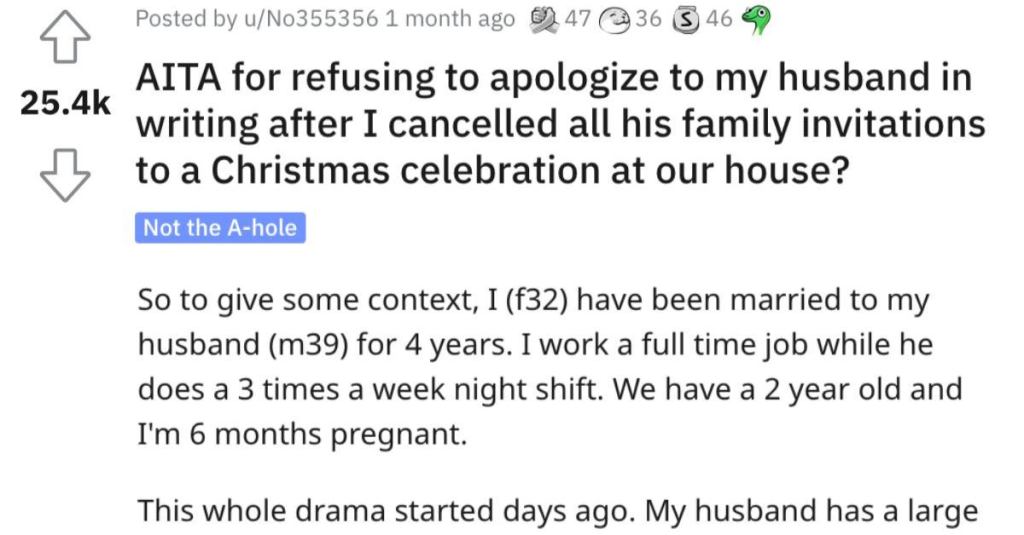 The holidays are when family drama really ratchets up, you know what I’m saying?

And here we have yet another story from Reddit’s “Am I the A**hole?” page that deals with some family members at each others’ throats.

AITA for refusing to apologize to my husband in writing after I cancelled all his family invitations to a Christmas celebration at our house?

This whole drama started days ago. My husband has a large family. And on every Christmas they’d gather at his father’s house. My father in law passed away a year ago and This year my husband decided as the man of the family to host Christmas at our house. Unbeknownst to me, he sent out invitations for a 5 day Christmas celebration to his entire family which are about 26 members in total.

I found out about by accident and I was too shocked to react. I confronted him on it and he said I shouldn’t be surprised and just get used to it because after his father’s death he’s now the family’s “head” and all major family events will be held in our house and in his presence. I freaked out and said no this is wrong and he should’ve talked to me first before sending out any invitations to his family knowing I have other commitments like work and taking care of the house and our son.

He said we’ll manage if I took time off work but that means more workload later and it’d take away from my maternity leave. I demanded he cancel the invitations but he refused saying “over my d**d body” then walked out. I ended up sending a mass text to everyone who received an invitation explaining that we will not be hosting Christmas this year.

He found out and went off on me calling my behavior outrageously appalling and said that I broke his word to his family and made him look small and with no authority. I in a very strict tone replied that I didn’t sign up to host a celebration and accommodate 26 people while pregnant, taking care of a toddler and working.

And I don’t care if he became the head of family after his father’s death because it means nothing to me. He took offense to that and walked out almost crying.

He later talked about how I disrespected his father and him with what I said and demanded a hand written apology for cancelling the event and for being insensitive towards him and undermining his authority in front of his family.

But I said no apology from me in any form and the issue is still up especially with my MIL giving me a stern talk about how out of line I was for disrespecting my husband’s decisions regarding the holiday celebration with family.”

Hmmmm…now check out what Reddit users had to say about this.

This reader said that this woman’s husband seems completely delusional. 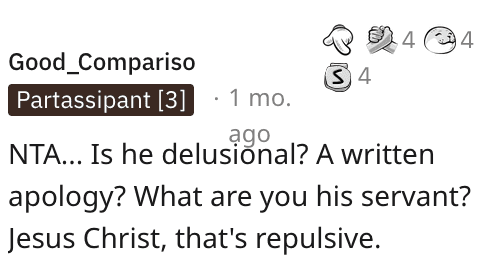 And another Reddit user made a pretty observation about this story. 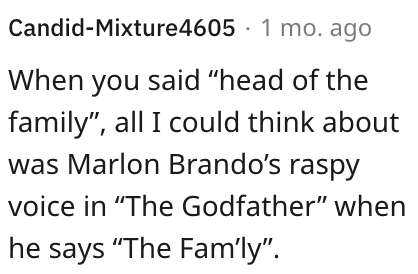 And this Reddit user said that these actions warrant a divorce. Boom! 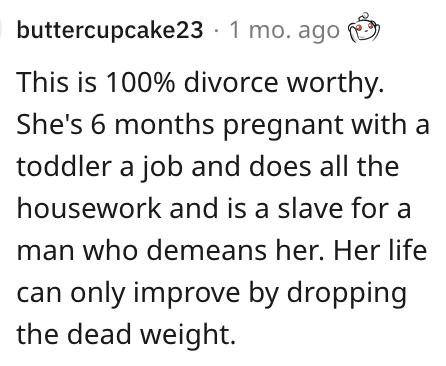