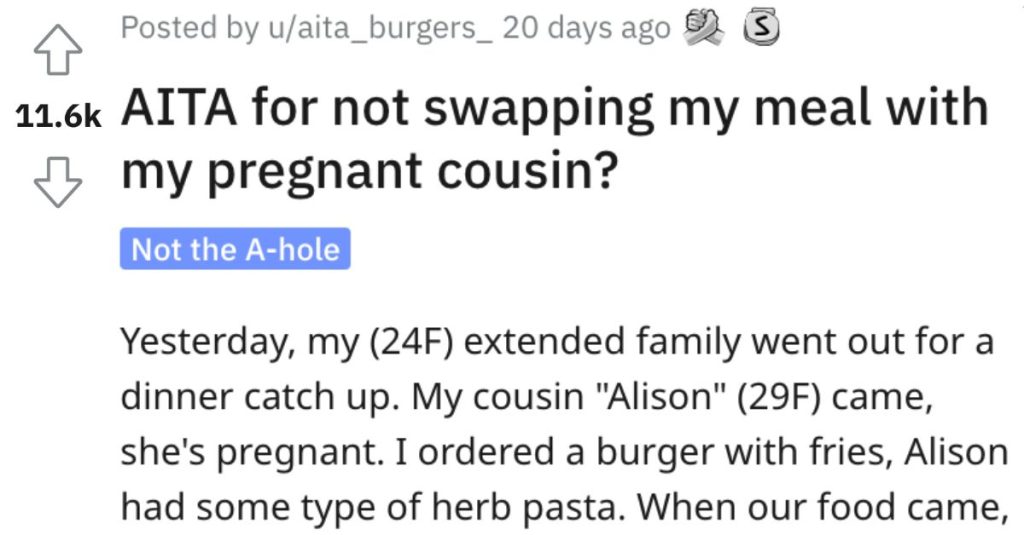 She Wouldn’t Trade Meals With Her Pregnant Cousin. Is She a Jerk?

When the food arrives, she doesn’t want what she ordered and she wants MY food.

I’ve caved a few times, but man is that annoying…

Check out this story from Reddit’s “Am I the A**hole?” page and see if you think this person was wrong…

AITA for not swapping my meal with my pregnant cousin?

“Yesterday, my (24F) extended family went out for a dinner catch up. My cousin “Alison” (29F) came, she’s pregnant. I ordered a burger with fries, Alison had some type of herb pasta.

When our food came, she asked if I want to swap with her because she didn’t like the smell of the pasta. I said sorry, but I want my burger and maybe she can swap with someone else. She said she was suddenly craving a burger and no one else had ordered one. I told her she can order again. Alison said they’re saving for the baby and won’t waste money buying another dish, that I didn’t have to pay the difference if I swapped (the pasta was more expensive).

I kept saying no, she got really upset and said I didn’t understand the struggles of pregnant women. My mom saw and said I should just swap and was acting like a kid, I said Alison was acting like a kid. Alison said she was hurt and I don’t understand pregnancy, my aunt (Alison’s mom) noticed the commotion and told Alison to ‘learn how to deal with these things because not everyone will care about her’.

I’d had enough so I just started eating before anyone else could tell me to swap. My mom later said I created a scene for no reason and Alison’s pregnant so I should’ve been more understanding. She said she’s ‘lost face’ in front of my aunt. Now I’m thinking if I should’ve just sucked it up and swapped?” 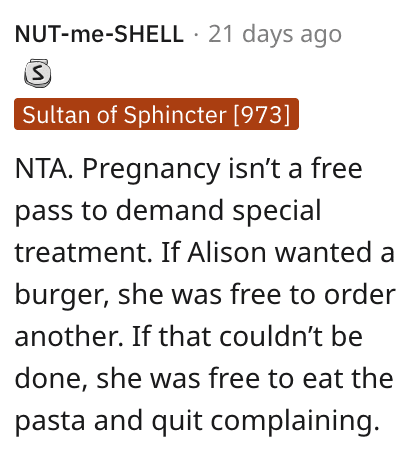 And another individual said they understood where the pregnant woman was coming from, but she acted very entitled. 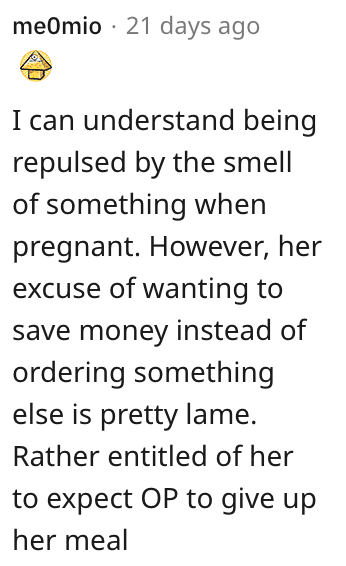 And another Reddit user agreed this woman was NTA.