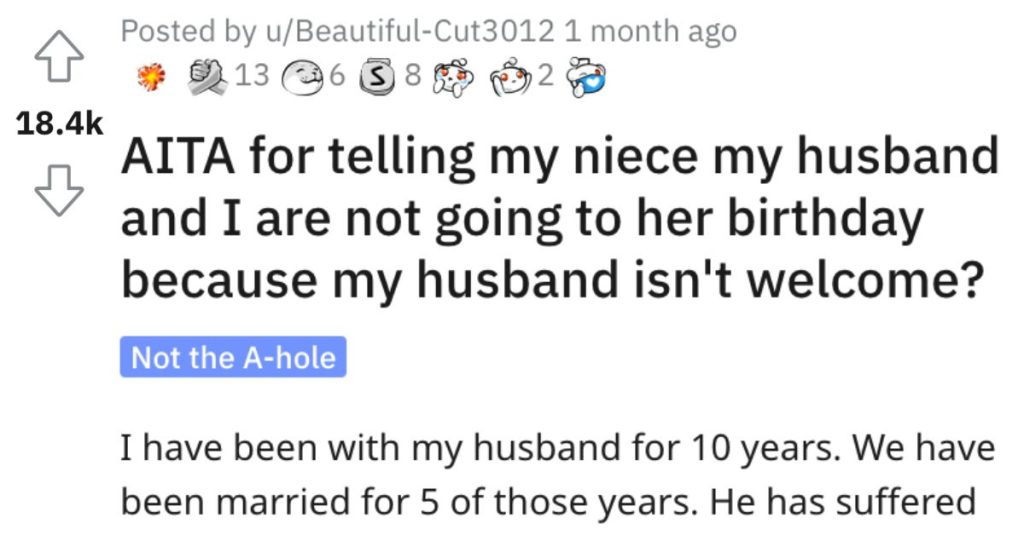 She’s Not Going to Her Niece’s Birthday Because Her Husband Isn’t Invited. Is She Wrong?

What are supposed to do if you get invited to a party…but your partner isn’t invited?

That’s quite a dilemma, don’t you think?

And this woman wants to know if she acted like an a**hole when she was faced with that conundrum.

Check out her story below and see what you think.

AITA for telling my niece my husband and I are not going to her birthday because my husband isn’t welcome?

“I have been with my husband for 10 years. We have been married for 5 of those years. He has suffered horrific trauma at the hands of his dad.

His parents were married and expecting twins when his mom suffered some kind of hemorrhage and she ended up with eclampsia. My husband’s mom and twin sister did not make it. But my husband did after a period of time in the NICU.

His dad told him it was his fault they died. He had grandparents who meant the world to him and tried to shield him from his dad’s anger, but when he was 8 years old they died also. His father then blamed him. He spent the next 10 years hearing day after day that he was the reason. At no point did he have another person to reassure him it wasn’t.

When we met he had just started to heal. He was away from his dad and attending therapy. It was a very big fear of his that what his dad said was true.

He is a wonderful man and my nieces and nephew’s adore him. He was always so good with them and the rest of my family.

In January 2020 I was pregnant and we went for a scan where we learned I had miscarried. As soon as my husband heard this, something inside of him broke. He started to unravel. He was in the middle of a mental health crisis. He was doing this weird manic laugh that was also a sob.

He ran out of the room and I followed after him, concerned. My mom and sister both work at the hospital (sister’s a nurse while mom worked in the little gift store). Both saw him in this worst moment. They saw as medical personnel were forced to intervene because he was in the middle of a breakdown, hysterical and totally out of it. He was totally broken and nothing could reach him. It was the scariest moment of my life. The worst moment of his.

And they judged him for “laughing”. Then when they told the rest of the adults in my family, they also judged him. All of my family were aware of his history. He told them about it years ago.

My husband ended up under the care of a psychiatrist who suggested he needed a lot more help than therapy could provide. Instead of understanding my family no longer wanted him around. They said a man who could laugh at his own wife’s miscarriage was not the kind of man they wanted around the kids. I told them I would not leave him behind.

My niece is turning 12 this year and is having her first big party since Covid. She called and said she wanted us there but she hadn’t seen us on her mom’s list. I told her we wouldn’t be able to come and that I was sorry, we both were. She was upset and asked why she never saw us. Why we wouldn’t come to her birthday party. Why we missed them all now.

I told her that my husband was not welcome by the other adults in the family anymore. She apparently yelled at her parents and mine. Then I got s**t from them for telling her what I did. They said I had no business saying that.

This person said she’s NTA and they respect her for standing with her husband. 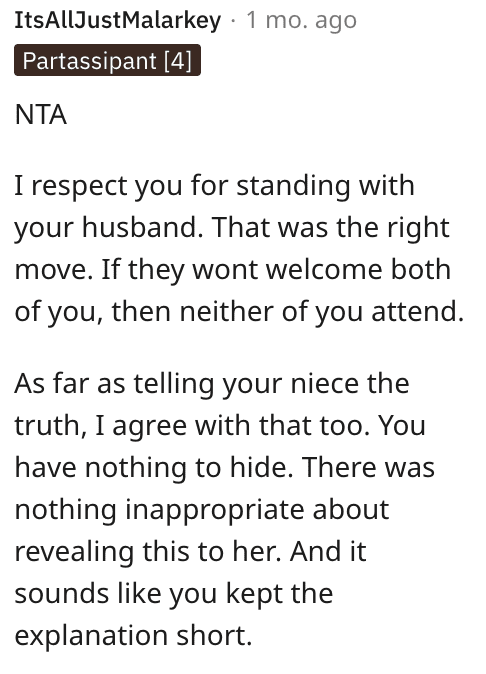 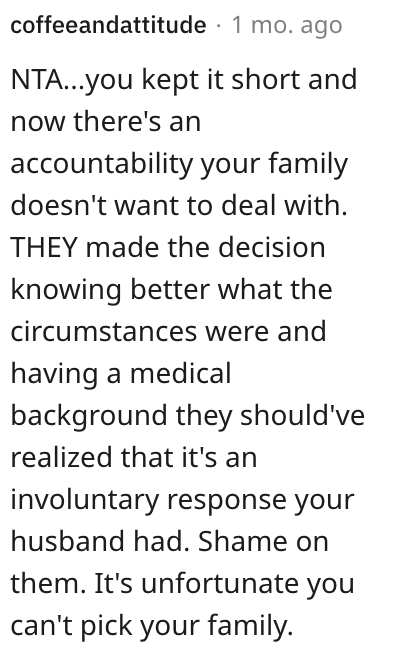 And another individual said she’s NTA and that her husband’s mental health should come first.