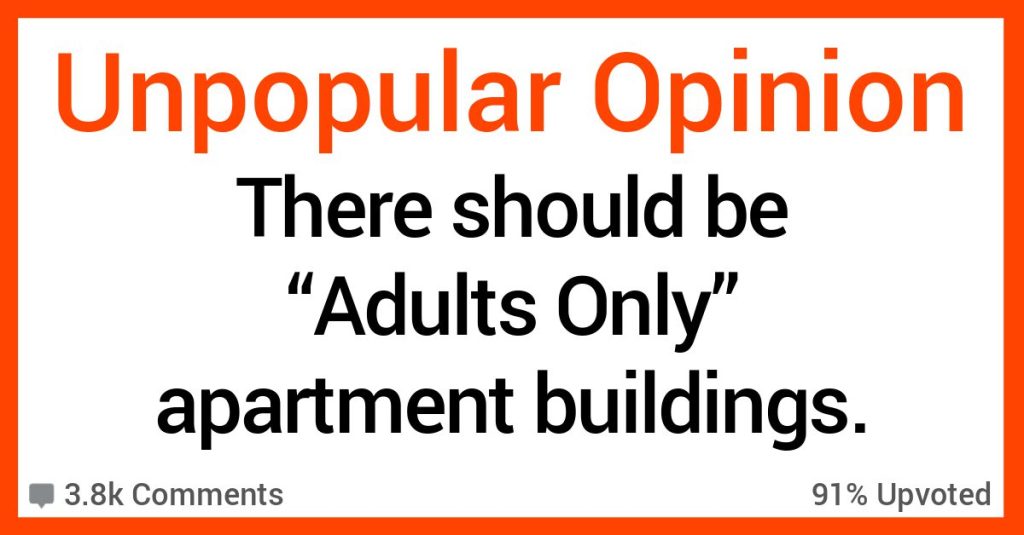 Should There Be Adults-Only Apartment Buildings? Here’s What People Said.

I like kids and everything, but I gotta say that I never, ever want to live below people with kids ever again in my life.

Been there, done that, not gonna do it again.

Do you think there should be adults-only apartment buildings?

“My wife and I got some new upstairs neighbors recently.

They were a bit loud moving in, but we figured that they were just trying to unpack as quickly as possible to get settled in. We brought them a basket of baked goods- and were promptly told by the lady of the house “I hope you guys are good with noise. We have 6 kids under the age of 8.”

They’ve been here for a month. We have not slept for a month. They scream at one another all hours of the day and night, run and jump super loudly, and are just generally annoying. Evidently, they like the sound of our doorbell and will press it repeatedly to the point where we decided to take the batteries out.

We’ve filed several noise complaints, only to be told “They’re kids. What do you expect?” Considering that we’re paying nearly $2000 in rent per month, we were expecting at least some peace and quiet.

If there were an adults only apartment building with no children allowed, that would be amazing.”

“I’ve been in an apartment for 3 months. It’s my first apartment (at 37) and we are here because my house burned down.

People are disgusting. They don’t use the compactor and just dump their trash. There’s no storage. People bowling every night above us at 10pm. When they use power tools at 11, oh that’s the best.

You are so right w the dogs. Any noise they hear they bark. Not their fault. Then any other dogs around they freak out.

It’s better than being homeless, but we had to rush to find something. House is being torn down next week and then we rebuild. Finally.

I would love an adults only complex or at least a dedicated building.”

“When I was younger I found an apartment complex that was all one bedroom and studio apartments so there would be no kids.

One night bored on the internet I discovered that I was the only person living in the complex that was not a registered s** offender.”

“The problem with this thought is that it’s not an unpopular opinion among landlords. Kids make for terrible tenants.

They generate noise complaints constantly. They flush things they’re not supposed to. They break fixtures and appliances, and generally increase wear on units.

If landlords were allowed to discriminate around family status, many absolutely would. That’s great for child free renters, not so great for people with kids who have nowhere to go.

In my mind, a more pragmatic solution would be requiring certain standards of sound dampening for multi-unit rentals, or at least regulating the language around how landlords can advertise.

That’s the real bulls**t of the thing.”

“If there were adult-only apartment buildings, I guarantee you’d be living next to p**ophiles.

If no kids allowed, I’m thinking there won’t be parks or schools nearby.

Therefore, it being the perfect place for registered s** offenders to live to abide by the law.”

“I resorted to moving out of my bachelor apartment that I had been living in for 14 years over a similar situation and also got no sympathy from people because “they’re just kids, let them play”.

The mother couldn’t care less the stress and disruption she caused me during when I lived there, and that I’m still experiencing now due to having moved and paying much more in rent than before.

I agree, there should be adults only apartments or at the very least, parents should be controlling their kids. I remember growing up, if I had ever behaved like that inside the apartment, my mother and grandmother were very quick to tell me to behave.

No child should be ringing a doorbell to a point where you have to remove the batteries or be jumping or screaming inside the house.”

“Why have kids if you’re not gonna raise them? I h**e those kind of parents.

Of course there’s gonna be SOME noise with kids, but 24/7 isn’t normal.”

“Or maybe an “adult only” sections.

Not full buildings, as that’s really bad for business, but maybe the top floor being adults only, and the one below also be adults only, but with children allowed on the floor beneath, so there is a buffer.”

And the penalty is strict.

No kids in my building.”

“There’s a simpler rule. No noise during rest hours.

You can call the police on people for that in my country. They’re tough on parties, may initially be lenient about unruly kids, but if they keep receiving complaints the family will be forced to figure out a way not to disturb the neighbors. Not sure what the punishment is if they don’t, they’d probably have to pay damages or something.

Obvioisly, this is a bit hash and most people feel bad about reporting noise unless it’s really persistent and really bad. But at some point, noise pollution is just too much and you deserve some peace and quiet in your own home.

I’m not comfortable with the concept of X-only buildings, whatever X is, because it’s straight up discrimination. For instance, poor people who may have more kids, take in extended relatives with kids who’d fallen on hard times, etc. may be entirely driven out of certain neighborhoods designated for childless adults only, creating further gentrification of cities. Especially since these rentals would be in-demand from young families who don’t plan kids yet, so the prohibiting expense may have a further gentrifying effect.

Eventually, if all buildings became either noise-friendly or noise-unfriendly, one of the groups may struggle to find housing because their preference is more in demand and thus prices are higher, making one of the choices more expensive.

Idk, it just doesn’t sit well with me. Though I agree living in an apartment with kids, especially with lots of them, is suboptimal. A house allows you more space for all of you, a yard for the kids to play in while being easily supervised, a buffer between you and the neighbors limiting the noise, etc.

But many can’t afford this and it may not even be sustainable to aim for everyone having this, financially or ecologically. Cities have just gotten too dense.”

“Unfortunately families aren’t the only people that make noise.

Personally, I’m struggling a ton with neighbors in their early 20s who throw loud parties and blast music all the time.”

“Most senior apartments do allow one or two units to be rented to younger people.