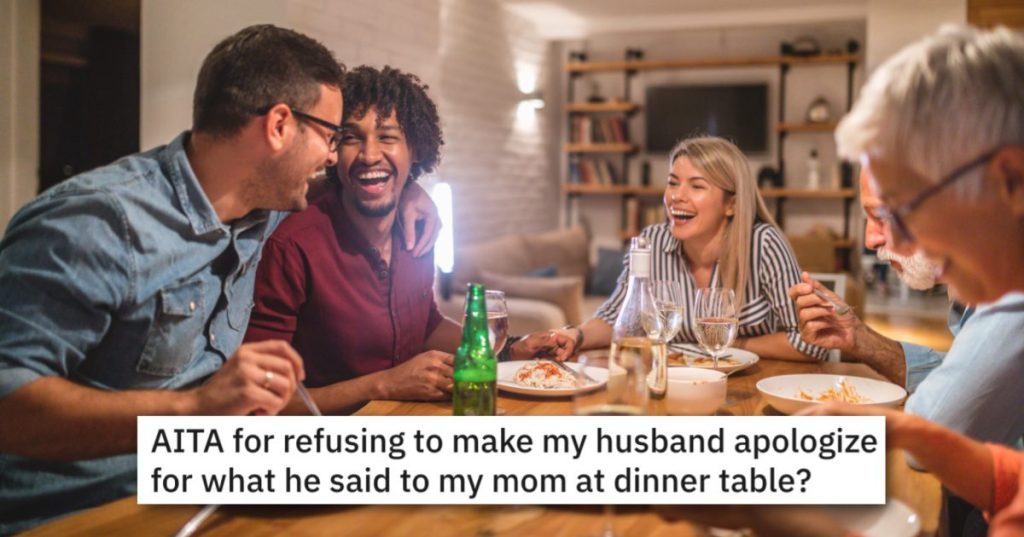 Should This Wife Have Intervened When Her Husband Roasted Her Mother At The Dinner Table?

Family relationships can be tough to navigate. That road can get even bumpier when introducing new people into the family, like a spouse or significant other, and roles tend to shift and change.

This woman was previously engaged to a man that her mother loved (because he had money), and their breakup was complicated by her mother’s sorrow over it.

So, I f31 recently got married to my husband Scott m36.

Before I met him I was engaged to my former fiance Martin, but we broke it off because this relationship was sort of pushed by my family because he’s a doctor and comes from a wealthy family.

When our relationship ended mom was devastated. She did her best to bring us back together, For example she lied to Martin about me being pregnant to save “us”.

She’s married happily now, and though her mother has for the most part let the previous relationship go, she’ll still bring up all of the nice (material) things the ex is doing for his current fiancee.

This is meant to shame the current husband for not being able to provide as well, presumably.

That was years ago now we’re all on good terms including Martin. Mom has a bit of tension towards Scott, she treats him well but constantly makes passive, nagging comments about him. She compares him to Martin all the time which bothers both of us but we try to let it slide.

Mom kept telling Scott about the diamond ring, new car, and bank account Martin got for his fiancee and kept sending him photos saying how generous Martin is to his fiancee than compared him to Scott and what he had done for me. I told her stop doing this and she apologized.

Last week, we were over at my parents house for a social gathering, lot of relatives came and we had dinner. At dinner table mom asked Scott if he saw the text she sent him the other day, he said he was sorry and that he didn’t notice. She told him to check it right then and read it out loud so everyone at the table could hear.

He took his phone and started reading the text out loud. Her text mentioned how Martin got his fiancee a new house and how generous he was, then said that Martin is younger than Scott, yet was able to buy a house.

Basically shaming Scott for his inability to buy a house. She wrapped up by saying that Martin maybe wasn’t so bad for me after all.

The current husband simply smiled and made a comment about the mother’s poor use of your and you’re, and how her former students must still be struggling because of her poor grasp of English.

I was shocked and Scott was pissed obviously, however, he didn’t lash out or anything he looked at the text, smiled and said “you know, what gets me about this entire text is how you were a public educator for 30 years, yet you can’t differentiate between the passive “you” and the contraction “you’re”, Good God! The thought of all the children that must’ve been left behind!”.

Everyone at the table busted into laughter and mom’s face went pale.

Mom left the table in an embarrassed huff and though most of the others laughed, some have said OP should have intervened and forced her husband to apologize.

She doesn’t see why, since their mother brought it on herself by being rude in the first place.

She decided to leave the table then she and my sister started yelling at me saying Scott was being awfully rude and I need to get him to apologize immediately for embarrassing mom at the table.

I refused to tell him to apologize then pointed out how she was being judgmental towards him, she defended herself saying she was just letting him know and he had no confidence and took it personally.

I left but kept getting told to talk to him and get him to apologize for what he did.

The top comment says mom should expect more treatment like this if she continues, so she should probably just cut it out. 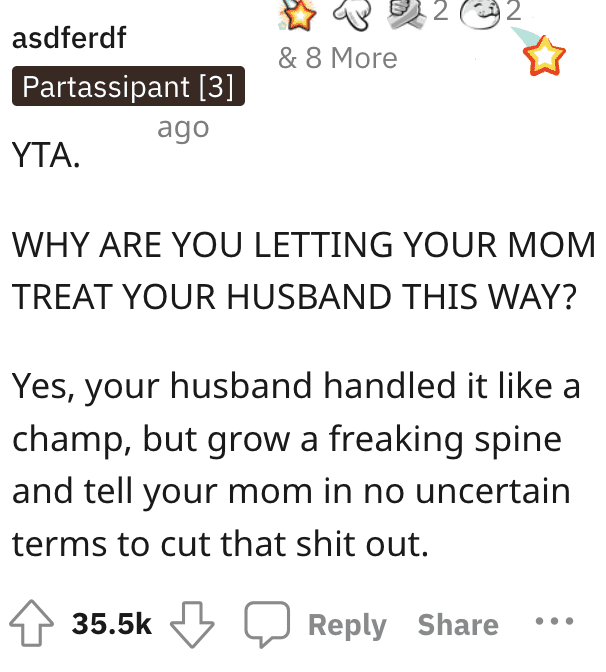 Everyone agrees that her husband sounds like a real catch. 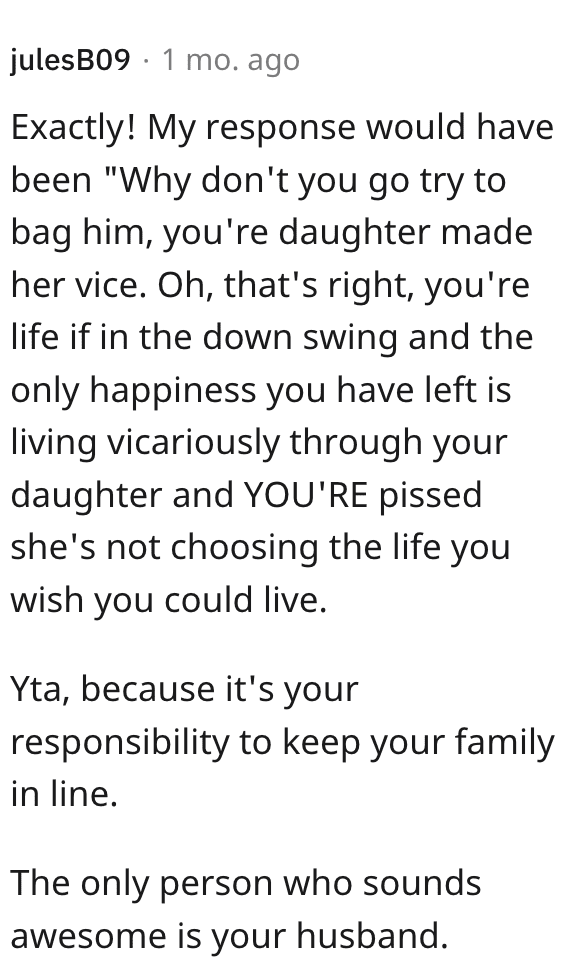 No one thinks they should be letting anything slide. 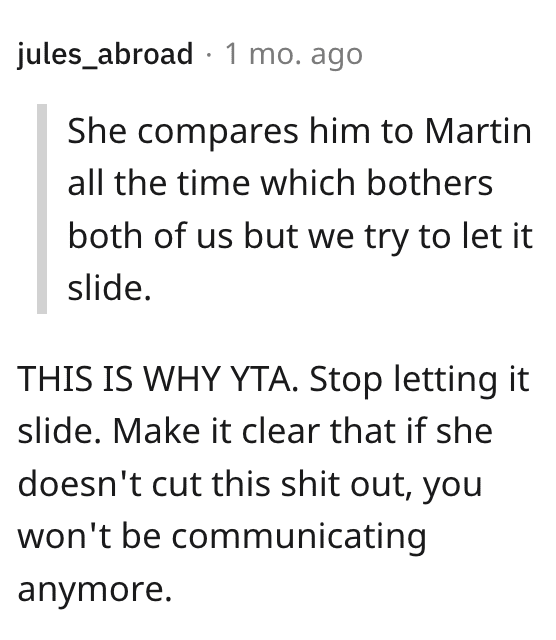 Many commenters were surprised OP even thought she needed to ask this question, as the answer should have been obvious. 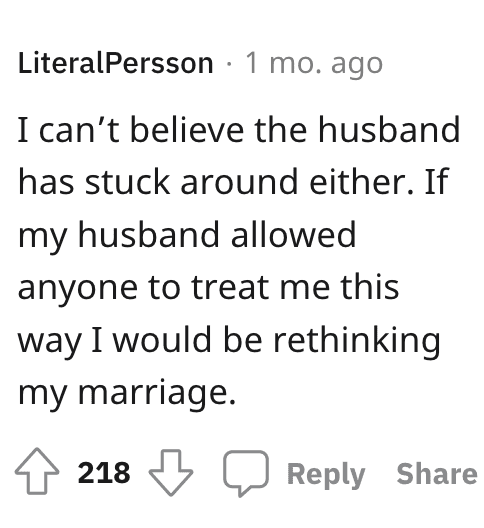 Just because someone gave birth to you does not mean you have to give them a license to mistreat you and your spouse. 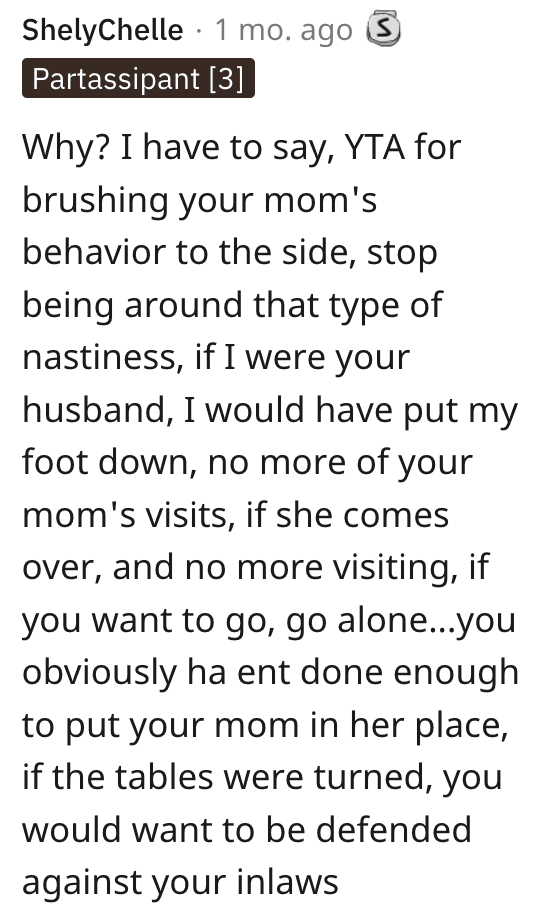 Yikes. I can’t believe anyone thinks treating a family member is ok.

If your spouse was letting this go on how would you handle it? Let us know in the comments!