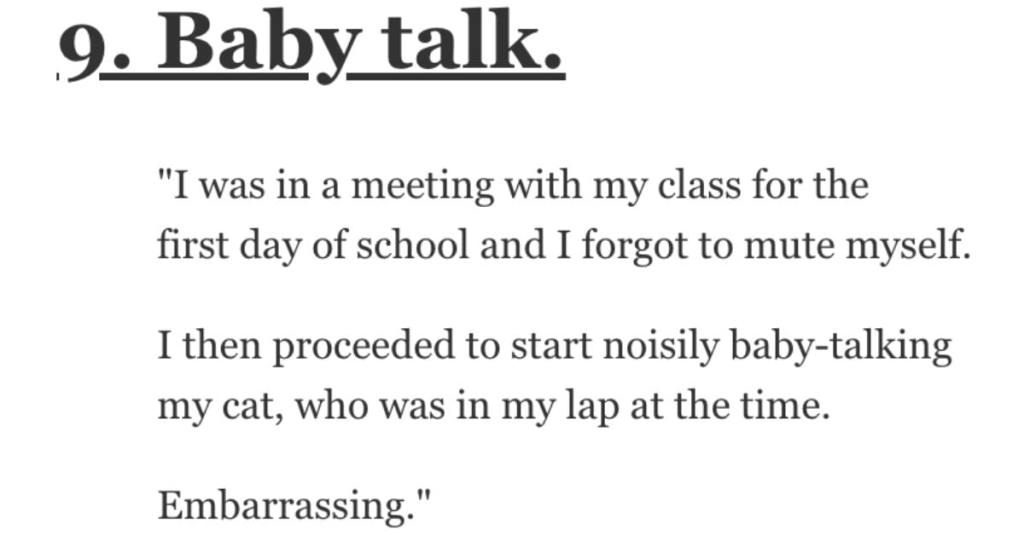 There are positives and negatives to our Zoom universe that we live in now.

It makes long-distance meetings and education much easier and you don’t have to commute to an office or a school.

But…it would also be nice to sit in the same room as some other actual human beings once in a while, don’t you think?

Either way, people are still getting used to this new normal and some funny and unexpected things are gonna happen along the way.

What funny things have happened to you when you forgot to turn off your mic? Or maybe someone else did?

Check out these stories from AskReddit users.

“I had to defend my thesis over Zoom and many professors came into the call to watch.

My thesis was about immune response in fish to parasites. One professor joined late and forgot to mute her mic and we got treated to this little gem:

“Shhhh. Mommy is learning about fish parasites, which is what you’ll get if you don’t stop peeing in the koi pond.””

“A girl’s mom: “Who the f*ck you on the computer fo this early in the morning?”

And asking the same thing over and over.

Teacher was holding us like 15+ minutes after the period had ended. She said something along the lines of “keep working arduously” and I responded with “if she says arduously ONE MORE TIME I’m going to FLIP A TABLE”

“When I was doing an online Algebra camp, the teacher forgot to turn off his Mic while we were supposed to be doing some problems.

“I just did 8 hour zoom calls for 7 weeks training for a new project.

On the second week, a man unmutes his call, farts the longest fart I’ve ever heard in my life, then when he finishes, mutes the call. I can see others laughing while muted at his fatal error of thinking he wasn’t muted and so he went to “mute” his call.

I found this to be the highlight of the week, but the following week the guy does it again!!! Honestly the second time I laughed but then started to wonder if it was some kind of power move…”

6. You got a free performance.

“In a math class I was in last year, we were taking a test, which you have to turn your mic on for—their way of trying to prevent cheating.

Some girl apparently forgot that hers was on and started belting out Stand By You by Rachel Platten at the top of her lungs.

It went on for the entire song and she was still humming it when I finished the test and left the call.”

7. At least you laughed.

“I teach for an online university that requires me to conduct a weekly live session.

One morning I was lecturing and a student popped in late. I said, “Hello, (student name)! Thanks for joining us.” She said, “Don’t say my name, b*tch!”, just before she realized her mic was on and turned it off.

“Grade 3 kid stopped in the middle of the class meeting; and took his laptop to the bathroom with him.

He sat on the toilet for the rest of the meeting.”

“I was in a meeting with my class for the first day of school and I forgot to mute myself.

I then proceeded to start noisily baby-talking my cat, who was in my lap at the time.

“Last week kid in my brothers class forgot his camera was on during the first class and was smoking a giant gas mask bong on his face during the syllabus review.”

“Ironically my IT teacher forgot to turn of his mic and camera and proceeded to get in a very heated argument on the phone with his ex-girlfriend who he has a kid with.

Did I mention that she’s also a teacher at our school?

Yeah most awkward 5 minutes of my life before he realized”

“During my English class, this one girl forgot to mute herself.

While my teacher was talking, she almost deafened all of us on the Zoom call answering her mother’s questions.

Her mother (from a distance): “What class are you in?”

Her mother: Oh, the hot teacher?

Her: Yeah that guy

Now, even I’ll admit my teacher is fairly attractive, but it does take it to another level when you get your own mother involved. Thankfully, our teacher is a chill guy and thought the whole thing was just kind of funny, and kind of just gave a general reminder to the class to keep mics muted.

She didn’t say anything for the rest of the class.”

In the comments, tell us about the funny things that you’ve seen and heard on Zoom calls lately.