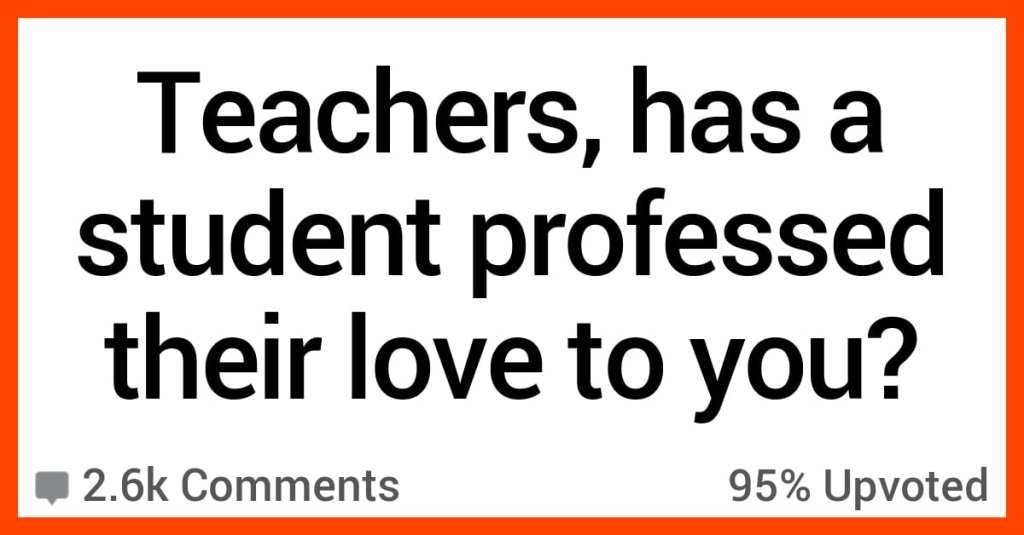 I had a History teacher in high school (who shall remain nameless) that I was totally in love with.

She was young, beautiful, funny…and I was 16-years-old…so I knew that wasn’t going anywhere. And I’m definitely not the type of person to ever actually do anything about a situation like that, so I guess I’ll take that secret with me to my grave…

So let’s see what teachers had to say about these situations on AskReddit.

“She would wait for me in the parking lot after class.

I had to start using the buddy system just to get to my truck without incident.”

“Was directly propositioned right before his graduation. He was 18 and I was 24, it was my first teaching job.

It was ridiculously uncomfortable and he’d been flirting excessively all semester.

Didn’t expect him to be brave enough to say anything but I guess he thought with graduation 2 days away it didn’t matter anymore. Husband was less than amused. “

They tell me that they are attracted to / love me. I let them know that my feelings for them are like a child of mine or little brother / sister.

I move forward, treat them with considerate respect – do my best job to provide them an excellent education.

Public school teacher of a decade and a half.”

“I had a student who, on the last day of class her junior year, left a note on her desk that said I was “cool, and if [I] wasn’t married, [she’d] totally ask me on a date.” We crossed paths again the next year and both pretended that nothing happened.

It was actually a sad story, because her mom had died earlier in the year, so I think it was a mixture of her feeling extra vulnerable, and me being 23 when I started teaching, that lead her to leave that silly note.”

“I had a student that used to draw hearts in her exams, she’d go to the office hours to ask me absolutely nothing relevant.

This was in university, and by the end of the semester she sent me an email asking me out and with a nude pic. I never responded and she never contacted me again”

“A child once told her friend that she wanted to marry me.

Additionally, she said that she hoped the mother of my children died so we could be together and that she’d been planning to do cartwheels in front of me so that I could see her underwear.

It was truly grim.”

“I was an ESL teacher at a language school that was owned by a Catholic university. I taught a lot of the brothers (most of them working their way to priesthood) from other countries that would come and learn English at the school.

One day in a one on one class, a Vietnamese brother told me his s*x dream in broken English and then later told me how much he liked me and how he would get sad when we do teacher rotations.

It was veeeery awkward. I later reported it to my head teacher and thankfully never got to teach him again.”

I just let them down gently, try not to crush their spirits or embarrass them too badly.

Then I make it clear it’s not happening, and continue being kind and understanding.”

9. Getting it from all sides.

“I taught primary school for many years.

Lots of little girls and their moms have confessed their love for me. I only every slept with one student’s parent. And zero students.”

“I was a substitute teacher while in college.

One day while subbing for a middle school art class, a 6th grade boy passed me a note on his way out of class. It read, “Miss C, I want to make love to you”.

I’m not sure if I was more shocked by the proposition or the wording! I didn’t sub for that class again, thankfully!”

I had a female student, (8th grade) come to me, tell me she was high on pills, and proceeded to tell me about her dream where she confessed her love and made out with me.

I clearly stated I was not interested and alerted admin of the fact she was high at school.”

“I run technology for a middle school and have had numerous teenage girls profess their love to me.

I am not that attractive and try to limit all my interactions with every student, since I’m not an actual teacher (I am often asked to sub, provide assistance and lunch and after school duties, and still have to assist students with their technology).

I once had a girl walk into my office, kick the door closed, and then begin venting to me about her day before telling me that the thing she loves most about me is how easy I am to talk to. I now keep my office door closed and locked at all times.

Since my second or third time dealing with a young individual telling me they have a crush on me, I’ve come up with some talking points to try to make this the most positive interaction possible:

There are numerous reasons why this is wildly inappropriate and why after this conversation, we will never discuss this again. None of them are your fault, but nothing will ever go further than this conversation

You have so much potential and should exercise that instead of spending time thinking of people SIGNIFICANTLY older than yourself right now.

Considering how little we’ve ever interacted, I want you to think of what qualities you found so profound that you felt the way you do. Consider them and ask yourself how that will best benefit you. Always know what you want and go after what will bring the most positivity in your life. You are the most important person in your life, so make sure you always love yourself first.

After that, I report the interaction to one of the administrators at my school in case they get a call from a parent.”

Have you ever had a student profess their love to you?

Or maybe YOU were in love with a teacher during your school days?

Tell us your stories in the comments! Thanks!