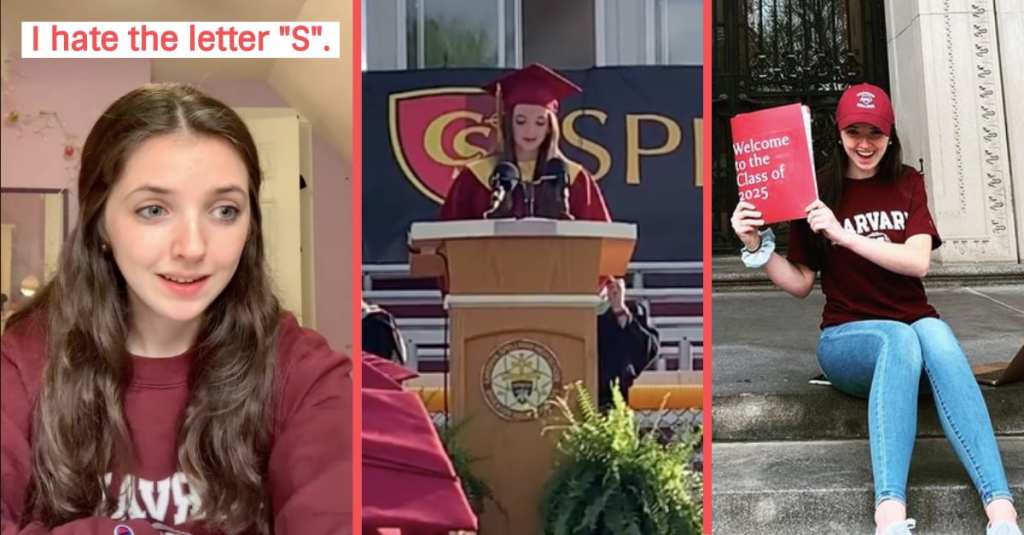 Teens and young adults regularly amaze me. Their passion and drive and boundless energy, their potential for good, their advancement of change.

Obviously I’m not the only one because recently, a young valedictorian went viral for her TikTok video sharing her Harvard application essay.

Abigail Mack, a drama kid at the top of her high school class, has drive and ambition. She likes to stay busy.

On her TikTok account she has dedicated a lot of videos to offering advice to other students going through the college admissions process. She discusses topics like which standardized test to take (the SAT or the ACT).

Abigail also filmed reaction videos when she opened her college acceptance letters, like this one, where she found out she got into Harvard:

In addition to Harvard, she was also accepted to Northwestern, Notre Dame, Georgetown, and Dartmouth. The girl is going places.

Based on her reaction, I think you can guess which school she chose.

In four subsequent videos, Abigail also shared herself reading her essay that, along with her stellar grades, helped gain her admittance to all those prestigious schools.

In the essay, she speaks about the pain of losing her mother to cancer at the age of 12.

The theme of hating the letter “S” in parents because of her loss is one that spoke to a lot of users, and with their encouragement, Abigail went on to post the rest of her essay.

After losing her mom, she controlled the one thing she could–her schedule–throwing herself into academics and activities.

While some of us are stifled under the burden of over-scheduling, Abigail found a rhythm and thrived.

As long as she was active, she didn’t have to think about what was missing.

She filled up the void her mother left in her life with activities.

Like any good story, Abigail’s essay takes a positive turn.

She learned to dial it back, to focus on the things that were most important to her, and excel in those.

As she explained to BuzzFeed:

“I grew up in a very artistic family–my mother opened a dance studio that my father still runs, and my father is a piano teacher–so theater has always been part of my life. There [is] something cathartic in escaping to a new world and being someone else for even just a few hours on stage.”

Abigail found her passion, and her motivation to succeed keeps her moving forward instead of dwelling on the past.

It’s an inspiring essay, moving and well written, and Abigail delivered it with a powerful speaking voice obviously trained in the dramatics.

But theater isn’t her only passion.

Over the past year, the Massachusetts teen has been awakened to the political movements happening across America, and there, too, she has found voice and meaning.

“Politics is a newer passion. When the Black Lives Matter demonstrations were occurring this past summer, I realized how passionately I felt about politics. I knew that I could no longer stand idly by and watch as the world made leaps forward without me. I became a fellow on Senator Ed Markey’s re-election campaign and also taught volunteers how to phone bank for Joe Biden’s campaign. It was extremely gratifying to feel like my voice was being heard.”

Now that she’s headed to Harvard in the fall, Abigail plans to combine her interests, focusing on humanities and social sciences. She may also add classes in French and foreign policy.

According to BuzzFeed, she doesn’t know what she wants to do with her life, which is frankly the best way to enter college.

Who knows? This bright young thing might one day become an ambassador or political leader herself. Or maybe she’ll write impassioned speeches that would make Aaron Sorkin proud.

What did you think of Abigail’s essay? Share your thoughts in the comments.