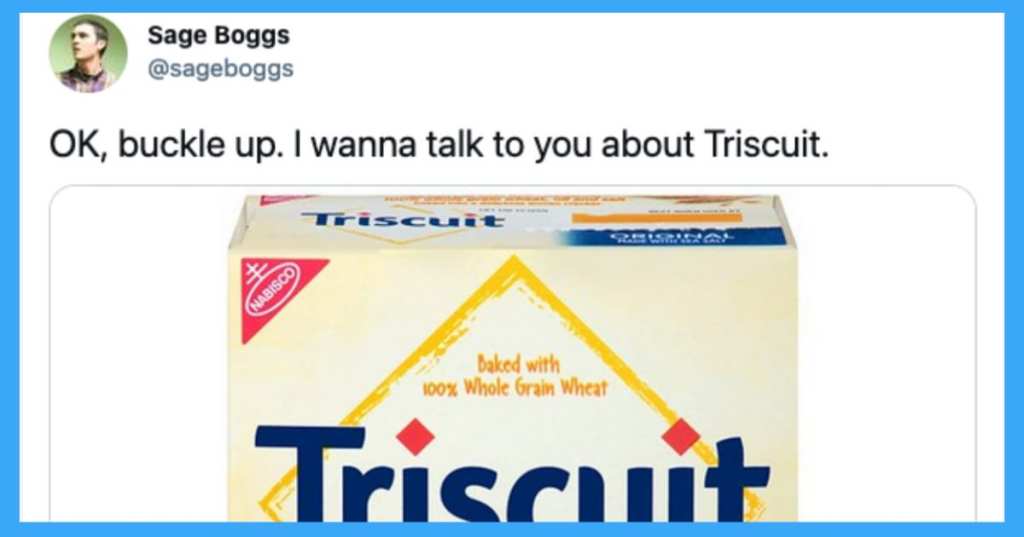 The True History of How Triscuit Got Its Name and the Writer Who Solved the Mystery!

Before I had to go gluten free, I ate a lot of Triscuits. Mainly the plain ones. What can I say? I like bland things. (I used to eat plain shredded wheat too.)

At some point, my husband and I had the same conversation that surely everyone has had: What does “Triscuit” even mean? I’m pretty sure I told him “It means there’s three kinds of wheat in there,” with the authority of someone pulling a very confident answer right out of thin air.

It makes sense, right? Context clues. Who wouldn’t assume that was what it meant?

Except we were all wrong.

OK, buckle up. I wanna talk to you about Triscuit. pic.twitter.com/Tg7334OSbc

Just like a friend’s Facebook photo of her child’s last day of Kindergarten set me off on a meandering conversation about the first day of school that ended with wondering whether the letter Y is always, never, or only sometimes considered a vowel in Wheel of Fortune, Sage Boggs was at a party and started to wonder about Triscuits.

Several years ago I was at a party (BRAG!), and I spotted a box of Triscuits. I asked everyone, “What does the word ‘Triscuit’ mean? It’s clearly based on the word “BISCUIT,” but what does the “TRI” mean?” (I’m great at parties.)

Everyone at the party pretty much thought the same thing I did about the name–that the Tri referred to some sort of trio.

But no one knew for sure.

The consensus was that “TRI” means three. Maybe “three layers” or “three ingredients.” No one knew for sure, though, so I Googled it. But here’s the thing — Google didn’t seem to have an official answer, either. Just more guesses.

Undaunted, Sage did what any good researcher would do. He asked the Nabisco folks themselves.

Funny story: they didn’t know either.

So we went straight to the source. We emailed Nabisco. And the response we got a few days later shook us to the core. Here it is: pic.twitter.com/Ks1gmaIQXj

Sage was beside himself with that cryptic answer.

Also, “No business records survived”? What the HELL happened at the Triscuit factory? Did the building explode? Did someone run out of the doors and yell “It doesn’t mean THREE!” right before perishing in a giant blaze?

I mean, honestly, what?!

His bio merely describes him as a writer, but clearly he does research for a living.

Also, he would make a great librarian.

While many people might have stopped here, taken this funny admission from the company off into the sunset as the end of a humorous anecdote to be told over Triscuits at future parties, Sage is not “many people.”

I was baffled. And I couldn’t stand not knowing. So I did a little sleuthing online, and stumbled on some early Triscuit advertisements. Take a look at these bad boys: pic.twitter.com/jbeBUmjeCF

He goes on to elaborate on what he discovered in the century-old advertisement.

In the early 1900’s, Triscuit was run out of Niagara Falls. And their big selling point? Being “baked by electricity.” They were “the only food on the market prepared by this 1903 process.” Look at the lightning bolts! And that’s when it clicked–

In case you didn’t catch that:

Not only that, but the good people at Triscuit actually confirmed his findings!

And his reward for all the brand exposure? Boxes and boxes of Triscuits in more flavors than I knew existed.

? Triscuit came through BIG time. Thanks to everyone who made this possible. pic.twitter.com/GzmDGskFFj

How’s that for a crazy little history lesson with a happy ending? Tell us what you think in the comments.