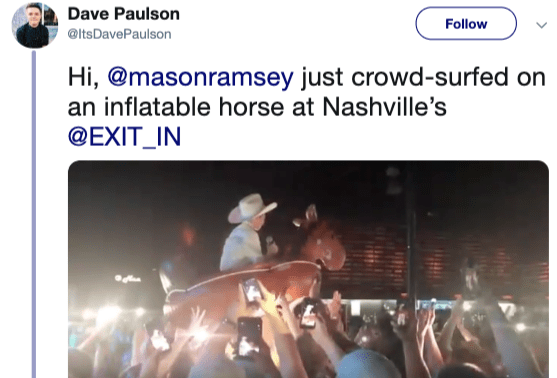 If you’ve ever been to Nashville and hit the honky tonks, you know that anything goes and your night could take a whole lot of different twists and turns.

Mason Ramsey is a very young country singer who previously grabbed the public’s attention in a viral video yodeling in a Walmart.

Since then, the 12-year-old has performed at Coachella, and he’s now (somehow) a full-fledged touring musician.

Ramsey recently took the stage at the Exit/In in Nashville where he pulled an incredible stunt: he got into an inflatable horse and was whisked away by the crowd.

Here’s the video of Mason Ramsey in all his glory.

I think we can safely say he nailed it.