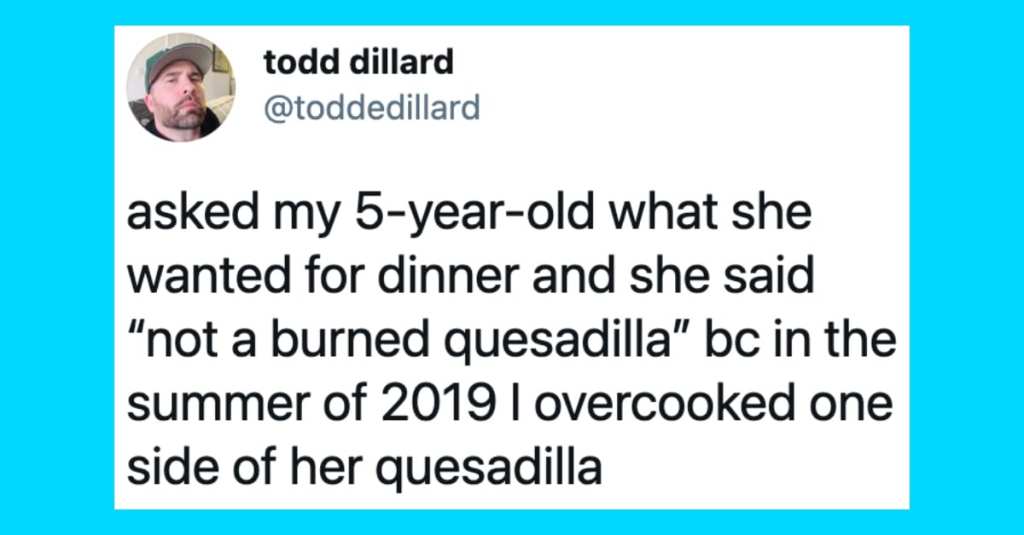 I have four brothers and sisters and every time we all get together we like to tell the stories about the ways that our parents did small things wrong that we just can’t let go.

It’s a great tradition! And you know we can’t let our parents forget about that kind of stuff…

These people all shared similar stories about kids who just can’t let anything go…let’s take a look.

2. Still getting over it.

My mom burned my Pete’s Dragon lunchbox in the oven because she put it in there to dry it (wtf?!!) and it took her hunting one down and buying it for my 41st birthday for me to get over it. pic.twitter.com/0MCe4X2s6H

Can’t live this one down.

One time we had to take money from our son’s piggy bank to pay the babysitter in cash. Drove to ATM first thing next morning to reimburse him. Ten years later, he still talks about that one time we stole all of his money.

This kid is gonna be a handful.

Me: no, I promise, vampires do not exist.

4 year old: you could be wrong. You were wrong about my doctor’s appointment. You said it was on Monday but it was on Wednesday.

But still…you are a murderer.

I changed the tank water that my small children’s beloved pet fish resided in, and it was too cold. The fish convulsed and died. They never let me forget what I did to Charlie. They are 46 and 50…????

My mom forgot to replace my tooth with money from the tooth fairy. The next day she took me to her work at a senior center and when they asked about my missing tooth i wouldn’t shut up about being ripped off. Got loads of money from the seniors.

7. You taught me the wrong way.

Brought my preschooler to the pediatrician. Doctor measures his height and says:”Three feet”. Son looks at him and says “Excuse me but I only have two feet”. He still asks me every time we see a pediatrician if it is the one who can’t count correctly.

At a crosswalk with the stroller, I stopped short once, thinking a car was going when it wasn’t.
Now, a year later, at every crosswalk my toddler says loudly to me (and to anyone else who can hear): “DONT GET SCARED!”

Maybe Mom’s not exactly a chef.

When the teacher was teaching the class about the five senses – sight, taste, hearing, smell and touch, she asked the class to describe how they knew their mother was cooking. My daughter responded, “When I hear the smoke alarm go off.”

I still relive my childhood trauma of not getting Twinkies in my lunch. I’m 51. My Dad randomly mails them to me, hoping I’ll let it go.

I bet they love hearing about this.

When we were just old enough to start learning how to walk, my twin sister and I both started rolling off our parents’ bed at the same time. Could only catch one. I ended up with a broken arm and a cast. That gets brought up a lot at family gatherings. ?

Don’t count on her in an emergency.

my mom was cooking a roast over night once and the glass the roast was being held in broke and the oven caught on fire. In a panic she asked what the number to 911 was. 13 years later we haven’t let her live it down. When she cooks we always ask her if she knows the number to 911

Do your kids ever give you a hard time for petty things?