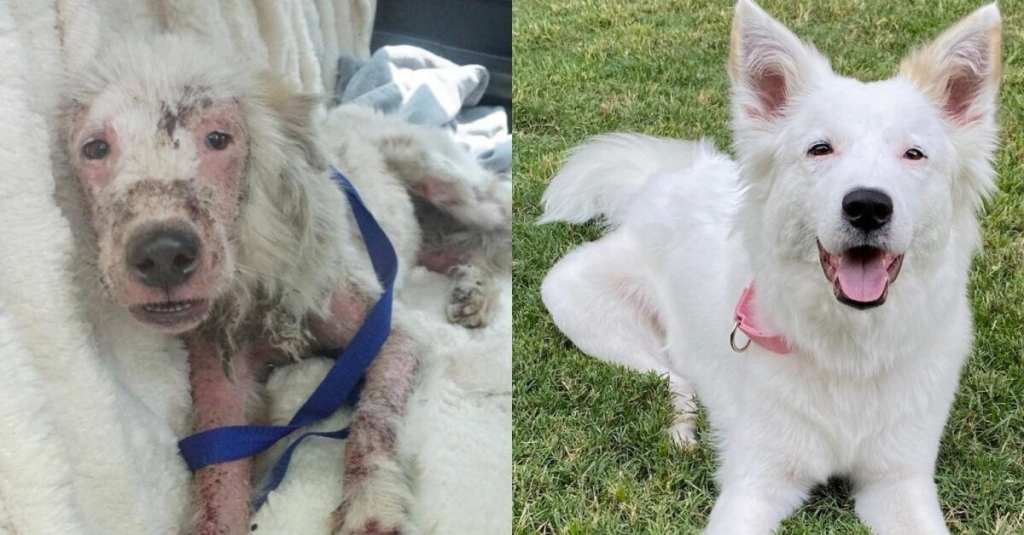 Nothing gets me choked up quite like seeing those commercials on TV about neglected and abused animals that are suffering through the long, cold winter.

AND, nothing makes me happier than seeing the kinds of photos that you’re about to lay your eyes on in just a second!

I’m talking about before and after adoption pictures of animals that obviously used to be in bad situations and are now in warm, safe, loving homes for the rest of their lives.

My foster dog’s 2 month glow up from BeforeNAfterAdoption

What a huge difference!

This is River. At the shelter, he was shaved as his fur was extremely matted and riddled with flees. He had coccidia and conjunctivitis. After some medicine and tlc, he’s doing amazing! He’s the most loving and affectionate kitty ever, always snuggling up and kissing me! I’ve had him for 4 months from BeforeNAfterAdoption

3. What a beautiful pooch!

She looks absolutely delighted to be with you.

First day, and then 6 months later. Her dry spots are gone, the calluses on her elbows and knees have disappeared, and she GLOWS. ❤️ from BeforeNAfterAdoption

4. Harvey is quite handsome now!

He’s a looker! No doubt about it!

Harvey was born the runt of a 12 puppy litter. The first picture is his first day with us at 3.5 pounds and lots of health issues. He’s now 32 pounds and getting quite handsome! from BeforeNAfterAdoption

5. From the bus stop to your house.

We’re glad she made a full recovery!

We fostered Jester after her leg amputation at 6 weeks old. She was found with her leg and shoulder shattered and was terrified of everything. Now her incision has healed, she’s staying forever, and she’s the happiest little tripawd. from BeforeNAfterAdoption

And he’s living a good one!

Top: ‘Lobito’ at the animal shelter in Feb. Bottom: ‘Cooper’ on a hike today with me and da’ wife. from rarepuppers

And you ain’t lying about that!

When we got Hilda she was very underweight after having recently given birth; somewhere in the last 6 months she turned into a long haired beauty queen! from BeforeNAfterAdoption

9. Apollo is doing great these days!

My Apollo when I found him vs. giving him lots of love, food and kisses. from BeforeNAfterAdoption

10. She keeps getting fluffier!

And that’s a GREAT thing!

UPDATE: I posted the two left pictures several months ago & many people commented on how much floof my kitty acquired in 4 months. I’ve had her for over a year now & she is fluffier than ever! from BeforeNAfterAdoption

She’ll keep on flourishing with you!

The shelter sends us the dogs nobody else can handle to foster. We took in our foster Tulip a month ago, who was Code Red for being terrified of people and biting. She was also terrified of the leash, so it had to stay on. We officially adopted her on Tuesday and celebrated by learning how to swim! from BeforeNAfterAdoption

My cuz doesn’t have Reddit so posting on her behalf. She found this pup almost frozen to death on the side of the road in Long Island NY back in January and has nursed her back to the cutest health ever since. This is Ellie ?? from BeforeNAfterAdoption

Those pics sure warm the heart, don’t they?

How about you? Do you have any rescue pets in your home?

If so, please introduce us to them and share some pics in the comments. Thanks a lot!