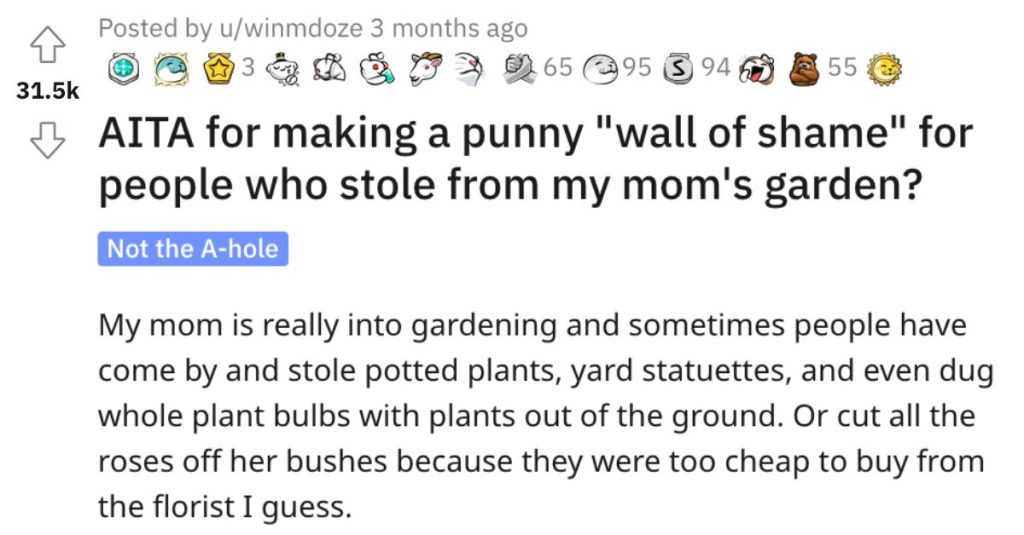 They Made a “Wall of Shame” for People Stealing From a Garden. Are They Rude?

I’ve definitely heard of the Walk of Shame, but I can’t say I was familiar with the Wall of Shame…until now.

Hey, you learn something new every day, right?

Take a look at this story from the “Am I The A**hole?” page on Reddit and see if you think this person acted like…well, an a**hole.

AITA for making a punny “wall of shame” for people who stole from my mom’s garden?

“My mom is really into gardening and sometimes people have come by and stole potted plants, yard statuettes, and even dug whole plant bulbs with plants out of the ground. Or cut all the roses off her bushes because they were too cheap to buy from the florist I guess.

“Oh Hay there! Don’t be a Daffy-dil and steal, or else you might end up doing hard Thyme! We hope Thistle be a lesson to Yew!

And I put the pictures of everyone stealing from the garden around the border. Also gave each person a funny fake name : “mr potato head” “dill-a-tante” “pothead” “prick” ‘Succ-er” ” i peony in my pants” “frond-less” ‘dirt-bag’ ‘in-fertile” and “root boy”

. I thought it was funny and cutesy, like how can you be offended with dumb plant puns… My mom thought it was hilarious and wanted me to hang it up because she was sick of seeing stuff stolen

But I got a couple complains, one neighbor said I needed to take it down because I had a picture of his son a minor who did something dumb yes but was just trying to bring his sick girlfriend flowers. And that is was disproportionate and rude to publicly shame him.

I told him that it wasn’t that big of a deal and he told me that I was being petty. I called his kid a little Birch which pissed him off and honestly might of been petty.

Another guy came to the house and returned a cutting his wife apparently tookbto propogate thinking it would be no big deal… But yeah it damaged the plant because she cut like a quarter off.

And he asked if we’d take down the sign because she was on the board of directors or something from the town and whatever. My mom had answered the door and told him to make like a bee and buzz off.

Anyway I guess they both know each other and now both these familys are annoyed.

AITA for making a petty sign about people stealing from my mom’s garden? Hoping to get them to stop?”

Now let’s see how folks on Reddit responded to this story.

One reader argued that these people committed a crime and the writer has nothing to feel bad about. 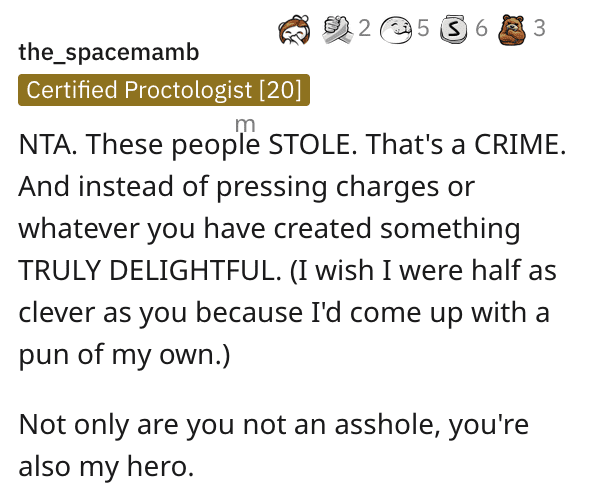 Another person said that, considering what these folks did, this is harmless shaming. 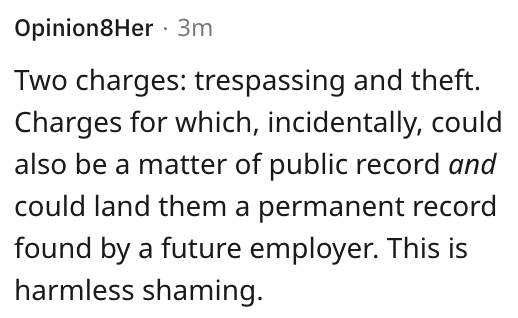 Another reader argued that it’s theft: plain and simple, folks!

And lastly, another Reddit user said that these folks got caught doing something wrong and that they have no right to be annoyed by the consequences. 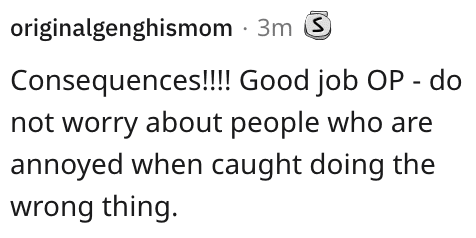 Do you think what this person did was rude?

Or do you think it’s hilarious?