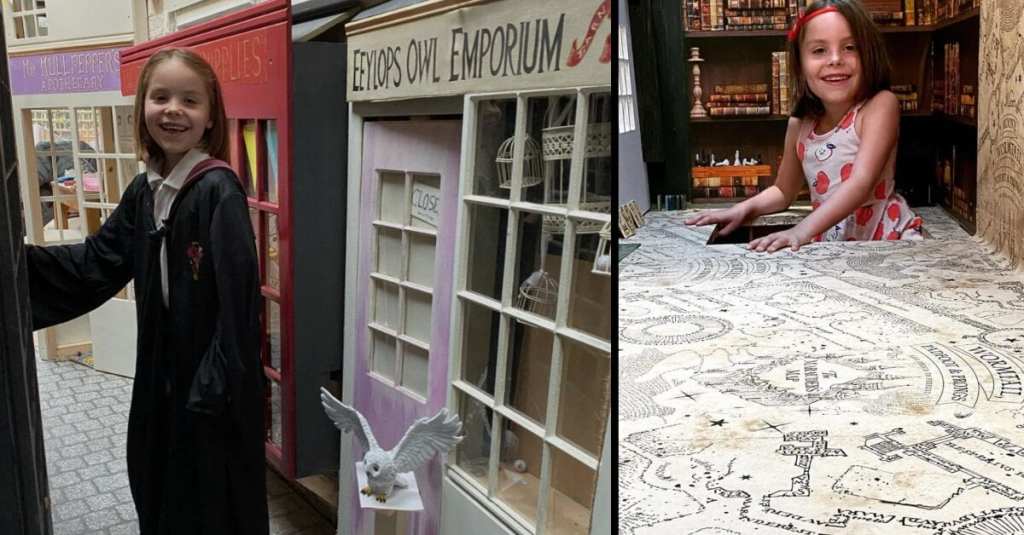 This Dad Built a Secret “Harry Potter” Alley for His Daughter

To all the parents out there, we just want to let you know, this is gonna be a hard one to top.

With so many kids stuck inside for the past year or so, moms and dads out there have had to get creative with how to keep their kids occupied and engaged.

And a dad named Dylan went above and beyond when he decided to build a replica of Diagon Alley from Harry Potter for his daughter Ella.

Dylan secretly built the alley behind Ella’s wardrobe and worked on the project for months so he could let Ella discover the alley for herself.

“Inspiration happened one lunchtime standing in the room wondering what to do with it and it occurred to me that even though it was not much use as a room, it felt like a mini street as we live in an old Victorian terrace house.”

His mom and various friends helped him out with the project and pitched in to make sure that the alley had all the right touches that would make it so special for Ella.

For example… Olivander’s wand shop. And Flourish and Blotts bookshop!

On the day of “the big reveal”, Dylan suggested to Ella that they play a game of hide-and-seek because he knew there was a good chance she would notice a little something different when she explored the wardrobe.

Just look at this smile!

I think it’s safe to say that Ella was pretty happy about this new world of wonder right in her own house.

“If a day is hard, then do something to make the next one better.

Thank you to authors like J.K. Rowling and filmmakers, as your stories and films are really helping people at the moment.

They certainly have helped us during the first lockdown.”

Take a look at the video of his walkthrough. It’s pretty adorable.

This is so cool!

Have you seen any cool home projects online lately? Or maybe you’ve done one yourself?

Talk to us about it in the comments. Thanks!