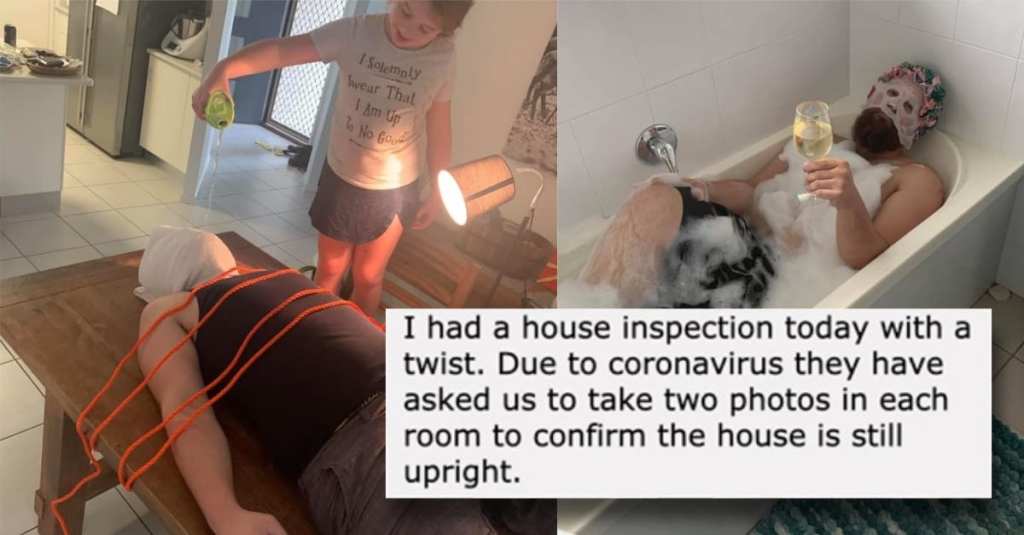 Buying or selling a house can be incredibly stressful. There’s a lot of money at stake, and there are so many hoops to jump through before the deal is done.

One homeowner decided to lighten up the process a bit by taking some hilarious photos inside his home. In lieu of an in-person home inspection, Tim Rousu took two photos of each room in his house to “confirm the house is still upright,” he wrote on Facebook.

Let’s dig into some of the funny situations Rousu put himself in for these photos, shall we?

He pretended he was being pulled under the bed by a monster:

He took a very relaxing bath:

He got real comfy on the couch:

He stared into the refrigerator provocatively:

He pretended to be tortured by his daughter:

He gave his wife a pedicure:

He got caught in a vulnerable position:

He got chased by the lawn mower:

Rousu says that, in the end, he did send serious photographs to the inspector after all. But even so, people on the internet had a field day with his hilarious poses and scenarios. As Rousu says, “Life’s too short to spend it being boring so let a child waterboard you some time.” Now that’s not something you hear every day, is it?

Would you ever do a goofy photoshoot like this for a serious request? If so, what do you think you’d do? We’d love to hear from you!