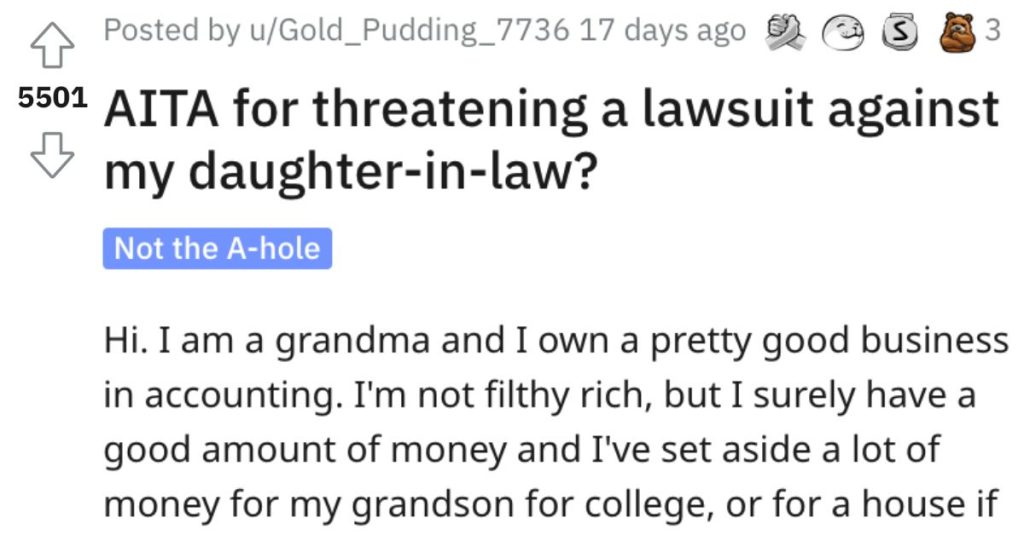 This Grandmother Threatened a Lawsuit Against Her Daughter-In-Law. Is She Wrong?

And if you’ve been paying attention at all to the “Am I the A**hole?” page on Reddit, you know there’s plenty of these stories…and there’s more where that came from…

Ready for another installment?

AITA for threatening a lawsuit against my daughter-in-law?

“Hi. I am a grandma and I own a pretty good business in accounting.

I’m not filthy rich, but I surely have a good amount of money and I’ve set aside a lot of money for my grandson for college, or for a house if he decides not to go to college.

Every year for his birthday for the past 8 years I have given him around $800 a year for christmas and his birthday, so he can enjoy himself. It’s quite a hefty sum of money, but he is a great child and I believe he deserves the money. He is 15 at the moment.

Well, recently he came forward and told me for 5 years that my daughter in law has stolen a lot of money from him, and some from my son as well. It turned out that she was spending a lot of money to herself and decided to pretend that my grandson’s money would be going towards college funds (It was usually through gift cards, so how would it even go towards a college in the first place?).

Not only this but apparently he was barely even FED and didn’t get basic necessities a lot of the time. 6 years ago she broke up with my son, and dated a man who’s salary was well enough to make sure my grandson was getting what he needs. They weren’t in poverty.

I was furious, not only was the money I gave my grandson to have fun being used by someone who I didn’t even like in the first place, but my grandson was being neglected when they could have given him the basic necessities.

I recently emailed my DIL, telling her how much she owes me and if she doesn’t pay it back by the end of the year I’m getting my lawyers involved. Well, she was furious and started using the fact that her boyfriend is a ‘military sniper’ as a way to threaten me into dropping the charges.

I told her I refuse to do so, and ignored her after that, knowing if she continued to threaten me all she is doing is incriminating herself. My other son who is also an employee of mine said I was being too harsh on her and should have just let it go, and that I already have enough money as is to pay him back.

This person pointed out the obvious: people who’ve actually done certain things don’t brag about them. 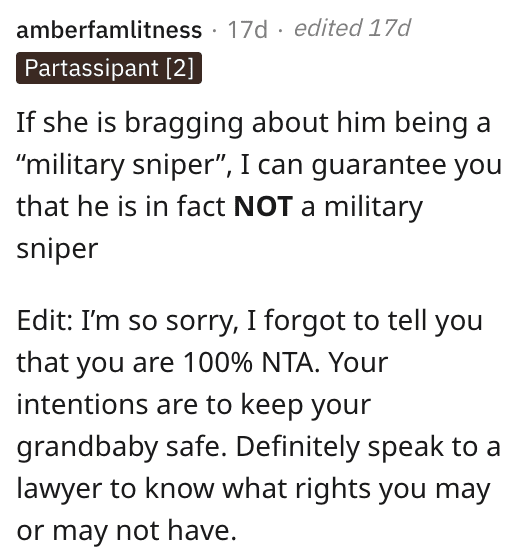 And this individual had a good idea for how to deal with these kinds of folks. 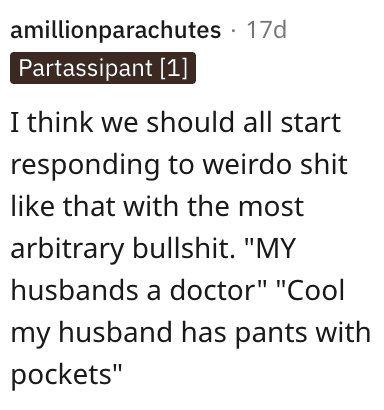 This Reddit user said that this woman needs to sue these folks. 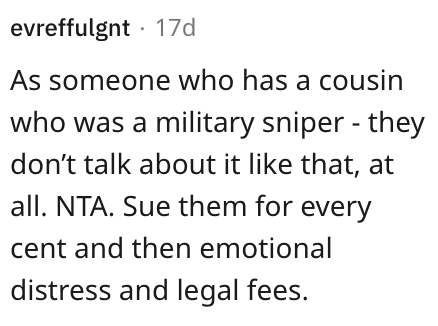 And this reader said that she needs to keep a record of everything nefarious going on here. 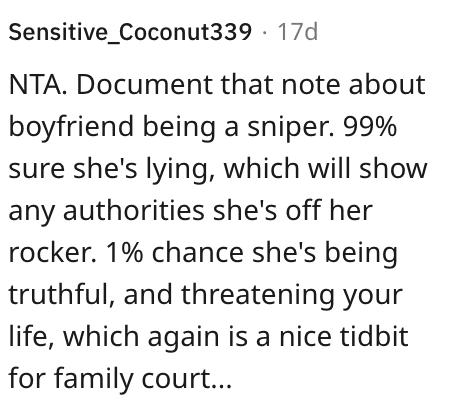