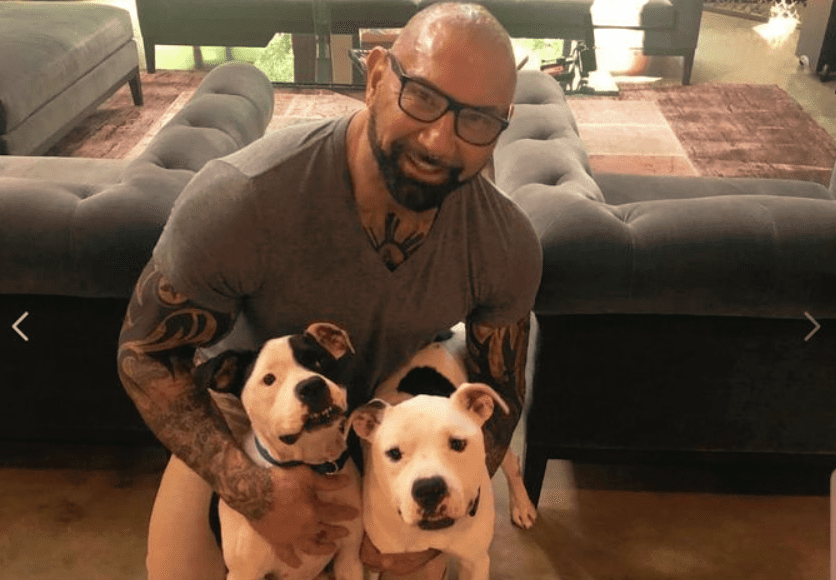 This Marvel Star Noticed These Lifelong Pit Bull Pals Were Separated, So He Adopted Them Both

Two pit bulls, raised together since their puppy-hood found themselves separated when they were surrendered to Hillsborough County Animal Services because of a new baby.

A shelter volunteer posted their story on the Rescue Me Tampa – Shelter Dogs Facebook page where it caught the attention of many, including Dave Bautista.

She described how the two dogs had been together all their lives, but were being housed separately at the shelter:

“They have no idea what they did to deserve this. It just breaks my heart.

They lived their whole life together!!! … Please consider adopting these 2 together.

They just lost everything they knew and loved.”

The post was quickly shared over 2000 times. People implored for someone in the Tampa area to bring these two dogs home.

Rescue Me Tampa is actually a group of volunteers who post on the behalf of shelter animals at the Hillsborough County Animal Services and helps to organize fosters.

One week later, the group posted an update. A volunteer wrote that both dogs were adopted and that

“They hit the DOGGIE LOTTERY!!!

They really will live the good life from here on out!!!”

The Tampa resident posted a pic with his new adoptees–so sweet!

I needed them, they needed me. These beautiful babies spent the first six years of their lives neglected and abused. And now they are going to spend the rest of their lives being spoiled and loved. Eternally grateful to the amazing animal lovers (Lisa Bricker @frankiesfriends ,Michelle Baker, Patrick & Kimberly Thorpe) in Tampa who worked so hard to keep them safe, find them a home and most importantly keep these two together. Ladies and gentleman I introduce to you….. Maggie and Ollie Bautista. ❤️ #adoptapitbull #pibble #adoptdontshop #adoptapet #adoptadog #dreamchaser #animalrescue #doglover

Bautista is a former WWE wrestler-turned-actor who has starred in the feature films Guardians of the Galaxy and Blade Runner, among others.

Naturally, he’s a big dog lover who has his three other pitties tatooed on his leg and painted for one of his office walls. One of the local charities he promotes, Frankie’s Friends, helps dog owners pay for veterinarian care if they can’t afford it.

We’re so glad these pit brothers found him! Now they’re going to live their best life!!