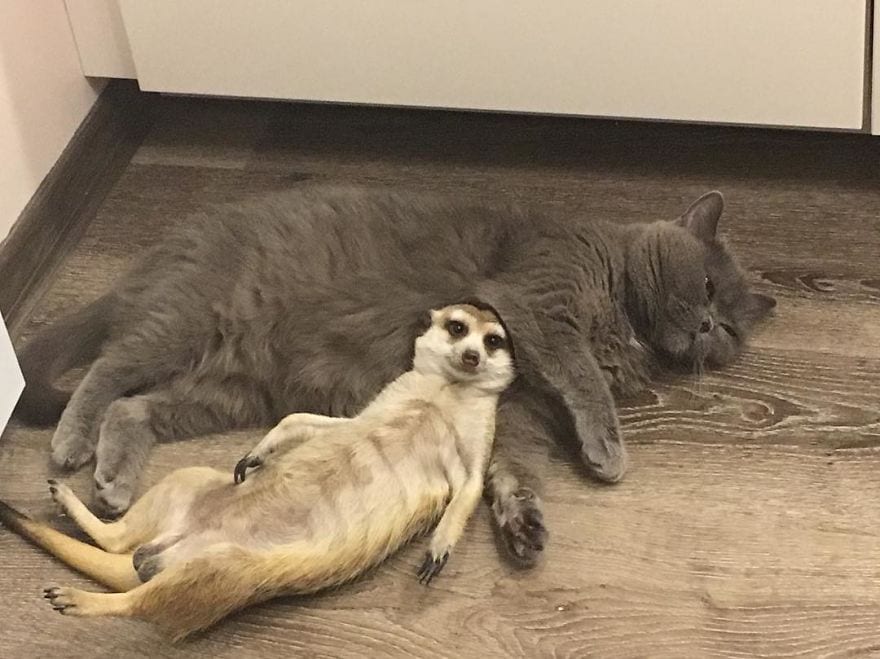 Meerkat And A Cat Become BFFs In One Day, And People Are Talking About How Much They Love It

If you’re having a rough day, this meerkat and cat BFF duo will quickly erase all of your worries. The meerkat and cat both live with their human, Ekaterine Kuraeva, in St. Petersburg, Russia.

Ekaterina adopted the meerkat Surya from the Moscow zoo. Meerkats are naturally social animals, and luckily, Surya found a fast friend in Ekaterina’s cat, Nice. They’ve been living together for six years now.

“When we got Surya, Nice was already living with us, they bonded straight away,” Ekaterina told Metro UK.

Meerkats bear no genetic resemblance to cats, despite the misleading name. Nonetheless, Surya and Nice get along perfectly.

“They do everything together, eating, sleeping and playing,” Ekaterina said. “Surya is definitely the most affectionate one, but Nice loves the meerkat too, he loves playing with him and licking him up.”

Happily, Nice has the perfectly calm disposition that one would need to balance out the lively energy of a meerkat.  But sometimes, Surya gets a little competitive over the cat’s attention.

“Surya is very jealous when I spend time with the cat, when I take him in my arms, he gets nervous and starts jumping trying to get him back.”

Surya has her very own Instagram page, where she’s become a bit of a social media celebrity. She has over 40,000 followers.

Fans love to watch them nap together, play, cuddle, and generally be their too-cute-for-real-life selves.

What do you think about these two? Cuter than words or are you just completely over these kind of odd couples?