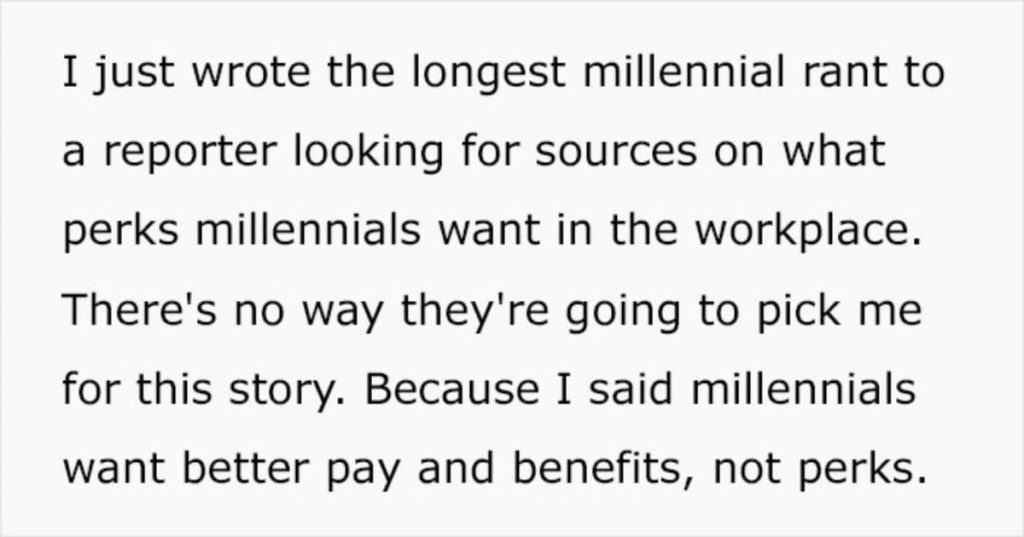 It’s no secret that Millennials get a bad rap when it comes to generations. They’re the red-headed stepchildren of the internet, getting blamed for all of the problems of the world even when they’re not the actual generation in question.

If you don’t know any Millennials personally, then you might be buying into the idea that they’re all about avocado toast and weird, open-concept offices – and to be fair, maybe some of them are. But for others, the struggle of a livable wage and the kind of benefits people took for granted fifty years ago is more up their alley.

This woman is going viral for suggesting just that – that all of the “cool perks” in the world aren’t going to make Millennials happy in the workplace if they’re replacements for actual, necessary benefits.

She says that when she was first asked to be interviewed, she figured her answer – which wasn’t about perks at all – would never make the cut. 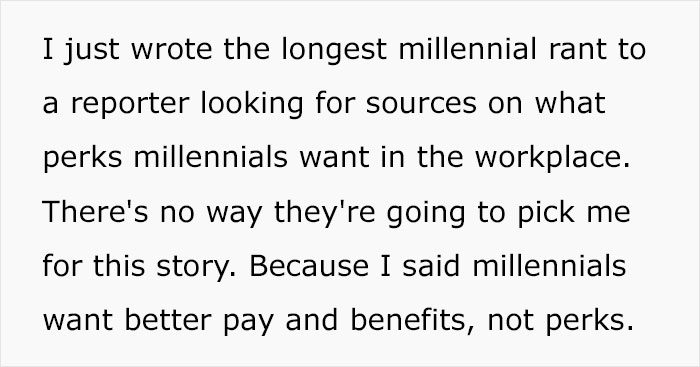 That said, she doesn’t believe that “perks” are what sells her generation on a job and a career, no matter how cool they seem on a website. 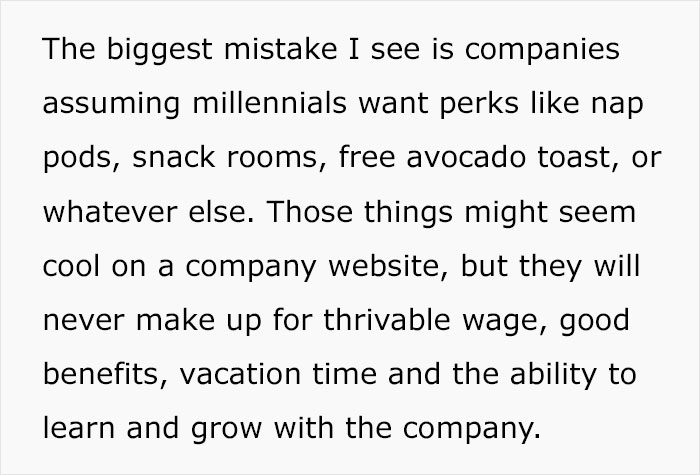 Just to reiterate, Millennials aren’t entry level employees. They’re people with both education and experience under their belts, and families to take care of at home. 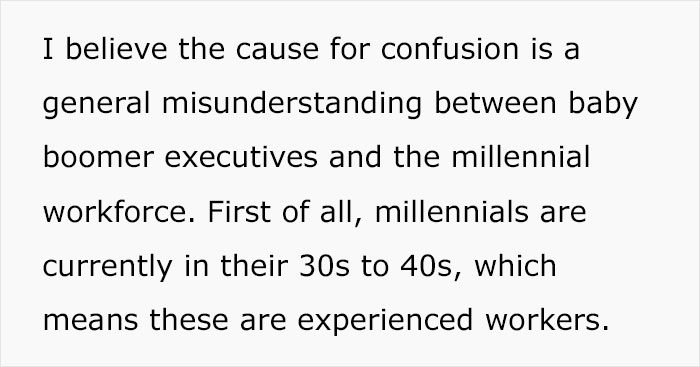 These are people who are looking for a balance of stimulating work experiences and time to pursue their passions and/or take care of the other responsibilities in their lives. 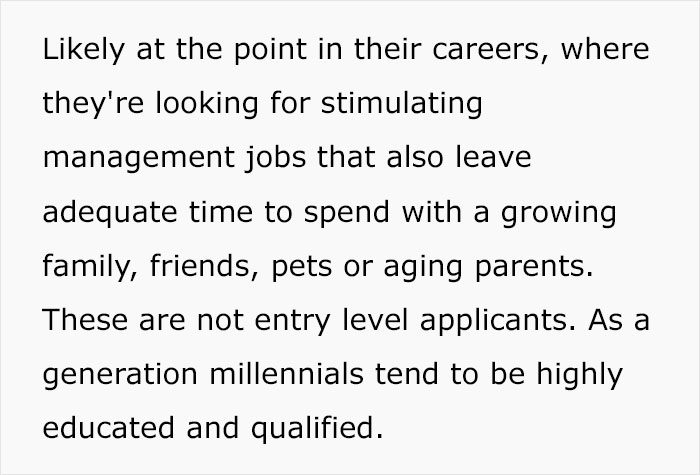 Their careers can often seem as if they’re behind where they should be because of the state of the economy when they graduated college. 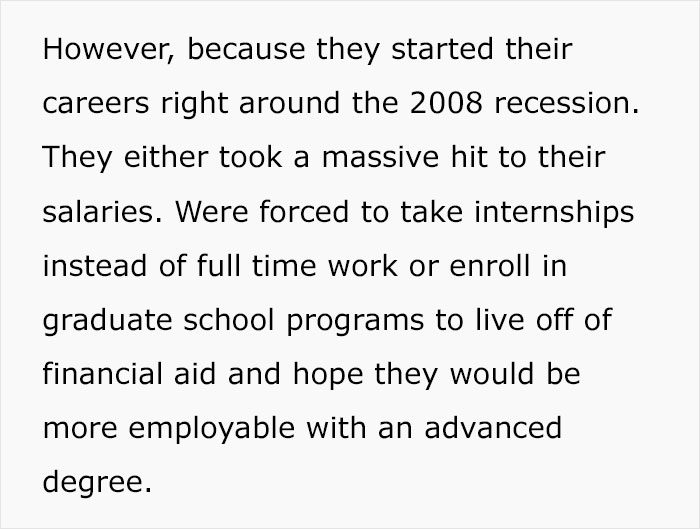 They’ve spend a decade or more and their entire working life trying to catch up, but no one is interested in making that easy (or fair) for them. 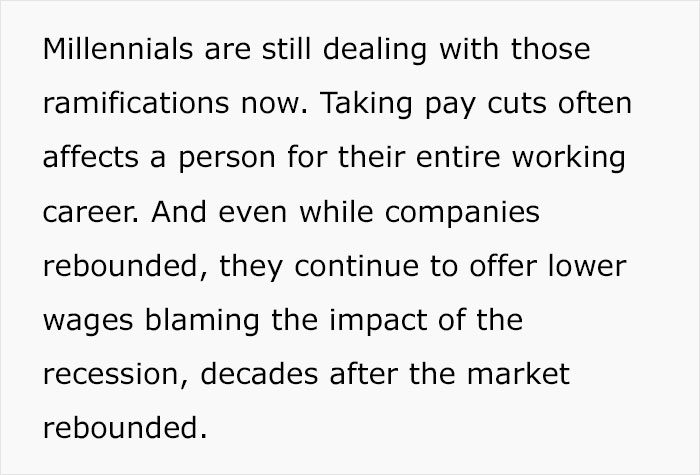 Millennials are also struggling to amass wealth because of crippling student loan debt and the fact that for them, wages have never kept up with the demands of the housing and other markets. 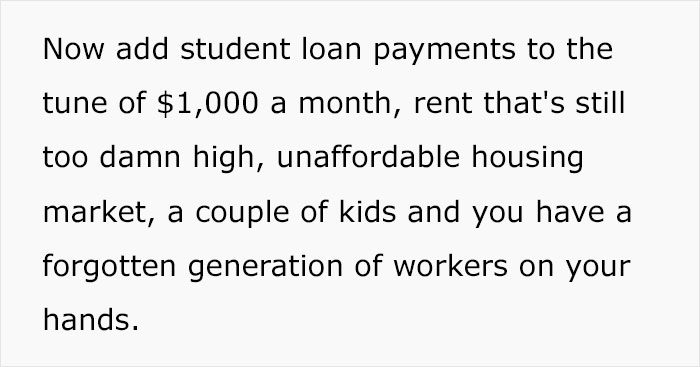 Finally, the pandemic has handed Millennials some scrap of control that has previously eluded them, and for the first time, employers are desperate to attract these qualified and experienced people to their workforce – but how? 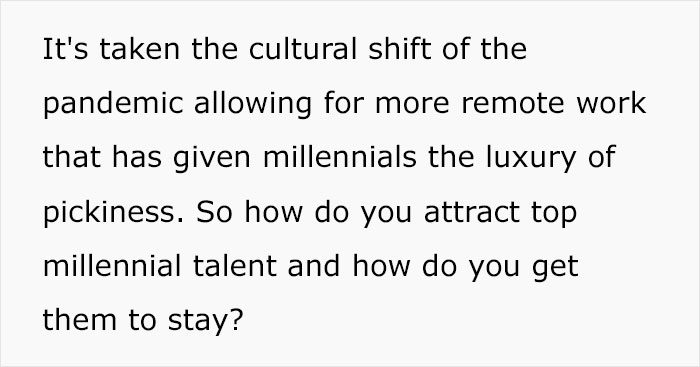 That’s easy – pay them a competitive wage, and raise it every year to match the rising costs of living in this country. 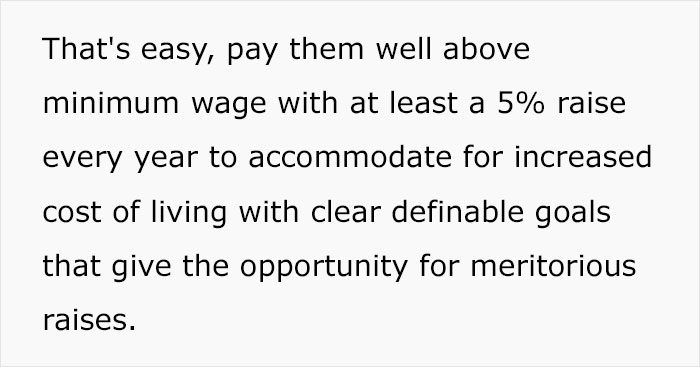 Offer benefits that go beyond the bargain basement coverages.

Give them mental health support, and give parents the freedom to succeed both at home and at the office.

Also important: keep challenging them at work because their minds are begging to learn and remain engaged. 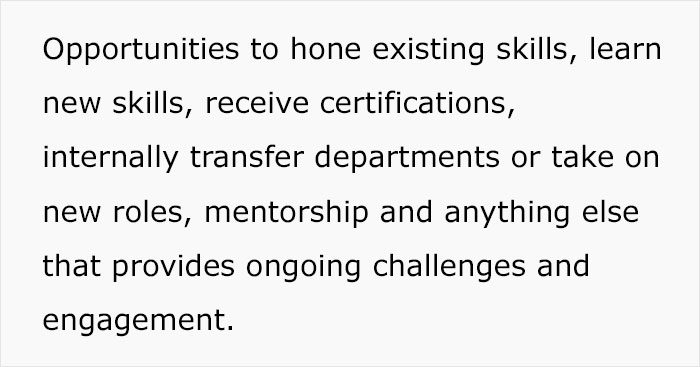 If you think about it, if they took all of the money they were spending on “cool” perks and just put it to wages and benefits instead, everyone would be happier in the end. 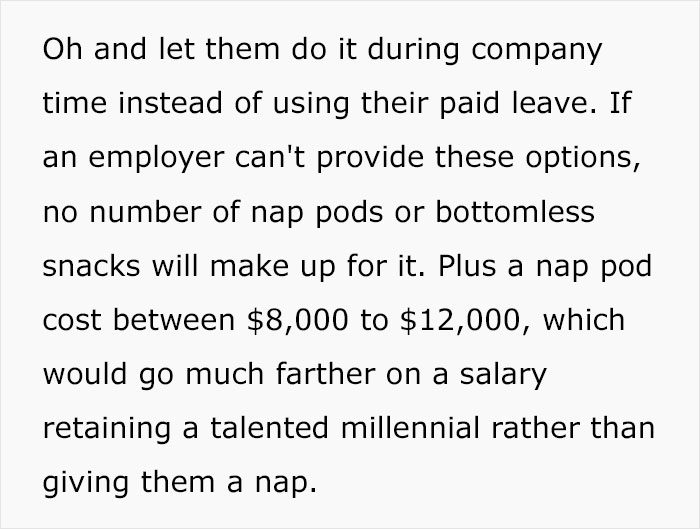 At least that’s what this Millennial says.

If you claim that generation – and this experience – as your own, tell us in the comments whether you think she’s wrong or right, and how do you think good wages and benefits would improve your life?

Let’s keep the discussion going below!