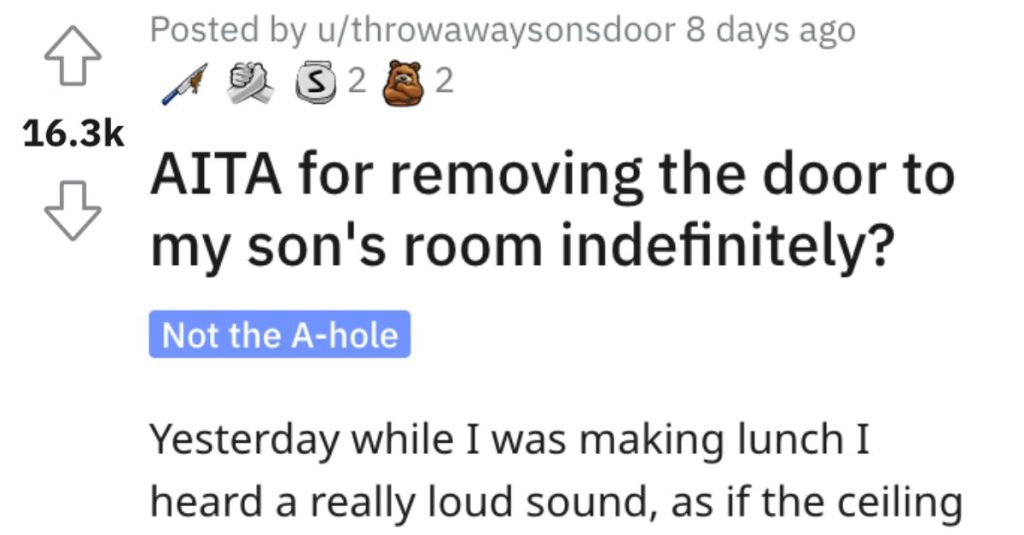 Did you ever have a friend growing up who wasn’t allowed to lock their bedroom door?

Okay, well this mom took things to a new level and removed the door to her son’s room.

Take a look at what she had to say about this and let us know what you think in the comments.

AITA for removing the door to my son’s room indefinitely?

“Yesterday while I was making lunch I heard a really loud sound, as if the ceiling was falling or a bookshelf had fallen.

My husband (41M) and daughter (17F) were out, the only other person in the house was my son (16M). I was pretty sure he was in his room, which is at the opposite side of the house from the kitchen, so while making my way there I checked every room and everything seemed in order.

I knocked on my son’s door and called his name, no answer. I must have knocked/called 3 times before trying to open the door which was locked.

At this point I was getting really freaked out, thinking that maybe he tipped his wardrobe or bookshelf and it had fallen over him and he was passed out on the floor. I was basically screaming his name, no answer.

I have no idea how I did it. I just threw myself the door and it broke. Now, clearly the door was already weak (I’m thinking termite?) but, yeah, it broke.

My son was fine. He was freaked out about the door but fine. The sound was his TV with the volume at the max, apparently. And he didn’t answer me calling because he didn’t want me bothering his movie. His words were “You were screaming like a harpy and it was annoying, I was trying to watch the movie. Fix the door.”

I said no. I wasn’t going to fix it since to “fix it” I would have to buy a new door and doors are expensive. And as soon as his dad got home he would remove the door entirely as it was too broken to just stay there.

He got really mad. Said it’s his “right” to have a door, he deserves his privacy. I said he had a door and while I was the one that broke it and it was a consequence of his actions, so if he wanted a door he would have to buy it (I know he doesn’t have the money for it right now). Until then, no door. He can change in the bathroom. He said f**k you, I said he was grounded.

AITA about the door?

My husband is fine with it, says only I know how scared I was, so only I can know the appropriate punishment. I’m now terrified that if anything happens where we really need to reach my son, we won’t be able to. But I have calmed down since and I’m wondering if maybe I’m the a**hole.”

One person said this mom is NTA and they offered a solution. 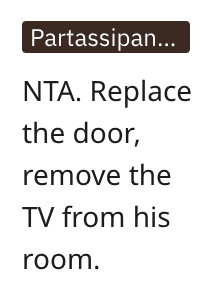 And this Reddit user said she’s NTA and that her son’s lack of empathy is disturbing.

Another individual said they should replace the door but it shouldn’t have a lock. 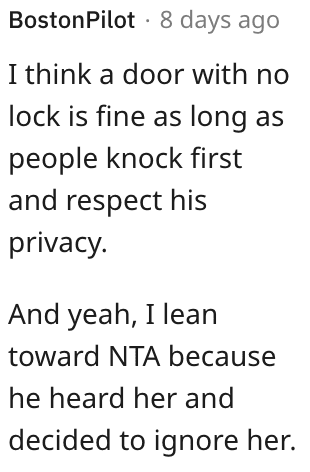