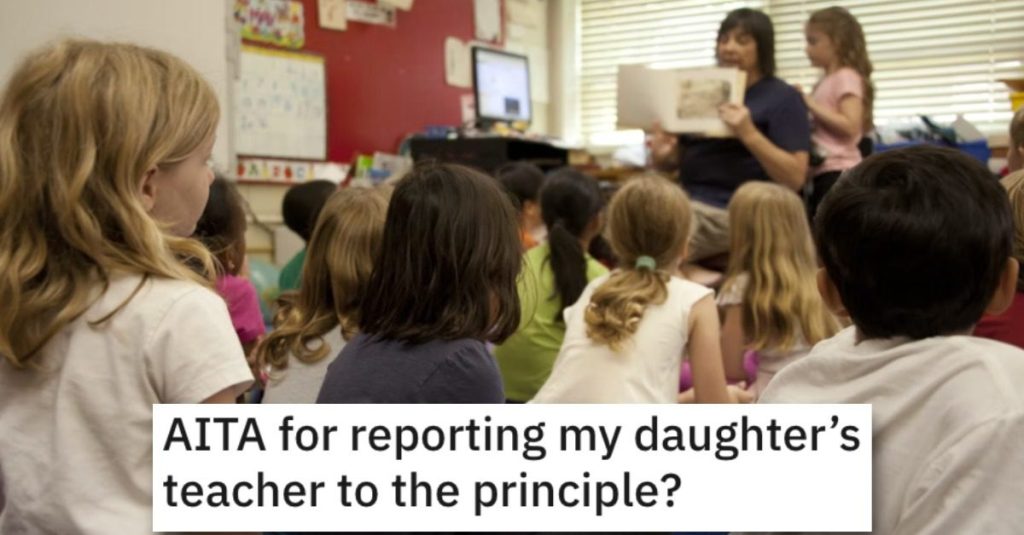 We’d all like to believe that teachers are doing the best for their students, but it’s stories like these that really get parents fired up.

Because what this particular teacher did seems pretty thoughtless.

Read the story below and see if you think this parent acted like an a**hole for reporting their daughter’s teacher to their principal.

AITA for reporting my daughter’s teacher to the principal?

“My daughter is 6 and is grade 2 but only been remote until a few months ago so she hasn’t physically been in school for long.

Recently she told me she didn’t want her packed lunches anymore and what to eat what the other kids were eating. She had been not wanting to eat what were her favourite foods and opting for asking for pizza more.

To be clear growing up I was also targeted by teachers who wouldn’t let me bring shrimp or anything with garlic or onion because they h**ed the smell. So I try not to pack anything that could cause them to target my child like spam sushi or egg fried rice. I was really upset because she is half Chinese but she clearly looks Asian and I felt it was my childhood trauma happening on her.

I called up her home room teacher for a meeting and the teacher said they didn’t make her sit in the other room to eat but my daughter told me to ask her best friend who confirmed for me that yes she had been. Another teacher confirmed her had seen her eatting alone and her home room teacher switched stories that she had but it was because my daughter brought a persimmon to school and it was distracting the other kids because they thought she was eating a tomato and she didn’t want her distracting the other students by having “foreign” food.

She refused to believe it was inappropriate and said she didn’t see anything wrong with sending her to eat by herself. I had to go to the principle and take my daughter to another home room to finish up the school year because that teacher said it only happened once despite my daughter swearing up and down it happened every few days for weeks before she told me.

She told me specifically of a time she brought tomato egg stir fry and a boy b**lying her because it looked like blood and the teacher sending her to eat in the other room rather than telling him to stop. My husband doesn’t believe her saying the teachers would have said something before sending her to eat by herself but I don’t think he understands because he is white.”

One person said this parent is NTA and the teacher’s behavior was very inappropriate. 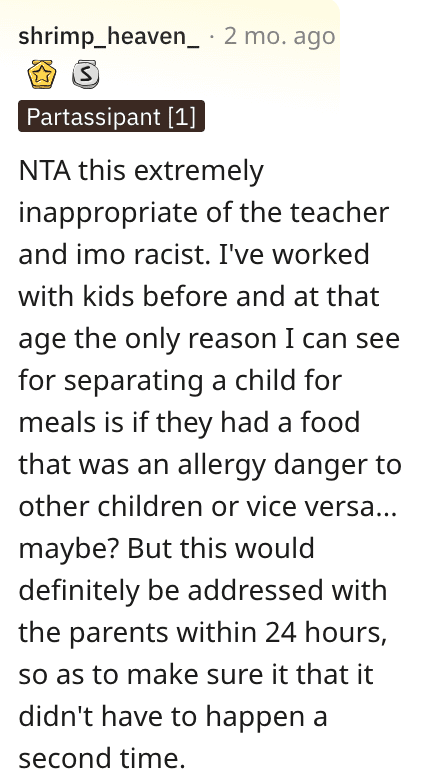 Another reader said they’re NTA and that the teacher should have used it to teach the kids about different cultures. 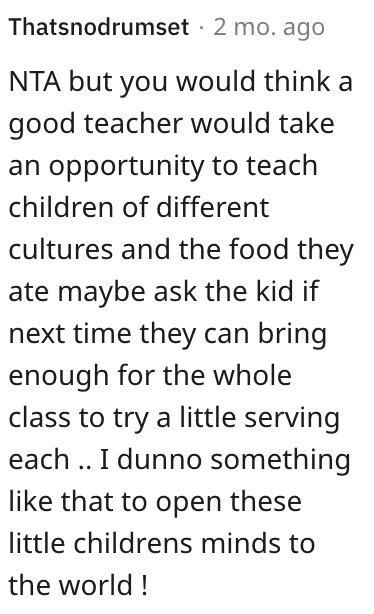 And this person said they think this is ra**st, plain and simple. 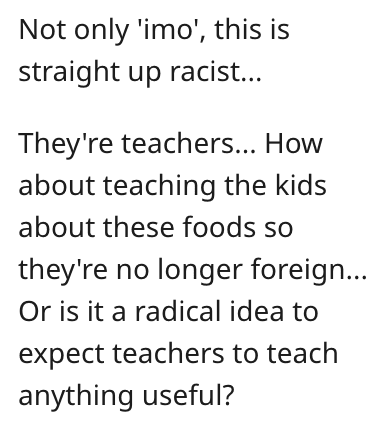