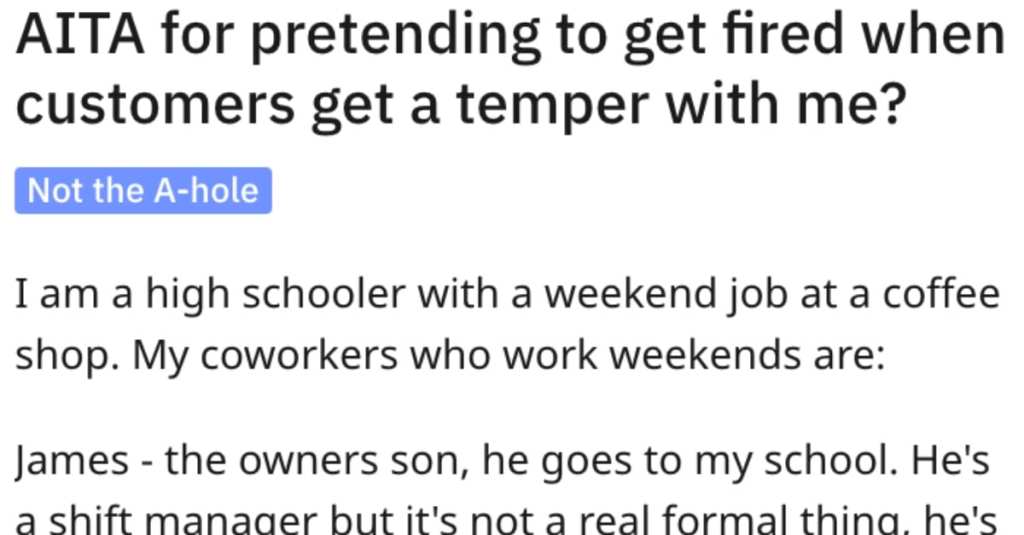 I guess you might want to cut this kid some slack because they’re only in high school, but still…I’m not sure about this kind of behavior…

A youngster shared their story on the “Am I the *sshole?” page on Reddit to see if people thought they were out of line when they pull a very specific prank at work.

Here’s what they said.

AITA for pretending to get fired when customers get a temper with me?

“I am a high schooler with a weekend job at a coffee shop. My coworkers who work weekends are:

James – the owners son, he goes to my school. He’s a shift manager but it’s not a real formal thing, he’s a friendly guy.

Danielle – A college student who sometimes works weekends too.

So sometimes customers will come in and just be angry about such little stuff. Like literally blow up about nothing. I dunno if theyre in a bad mood already and looking for someone to take it out on or what, but it’s a lot… Like how sad so your have to be to be a grown-*ss man taking your anger out on high school and college kids.

So James and I were joking about having a little fun with them and hopefully getting them off our backs.

So one day I was at work and some guy was having a temper about how we don’t make the coffee hot enough… Which I couldn’t do a thing about because I gave it to him right out of the machine.

So James came in and was like “sir is there a problem here” and the guy started ranting at him too. So he was just like “OP, this is unacceptable, you’re fired.”

I started acting real sad, like “no please don’t fire me, my family needs the money, I need this job, pleaseeee” and he played up being a hard-*ss, telling me to take off my apron and leave.

The angry guy started to backtrack, like “It isn’t that big of a problem, you don’t need to fire her over it. I didn’t mean it” and James was like “No, we pride ourselves on the best customer service”

Of course after all that drama I still had my job, we were just acting. And we’ve done it a couple times, whenever a customer will lose their temper at Danielle or I, James will storm in and “fire” us. And almost every time, the person who had come in angry will apologise and say that they didn’t mean it. It’s kind of satisfying, making people realize their actions might actually have consequences.

Anyway, I was telling my friends from school about this and a few of them thought it was a mean prank, to let someone go away thinking they’d gotten someone who desperately needs the money fired.

AITA for this joke?”

This person said that the kid is not a jerk for his behavior and that some customers are just plain horrible to deal with. 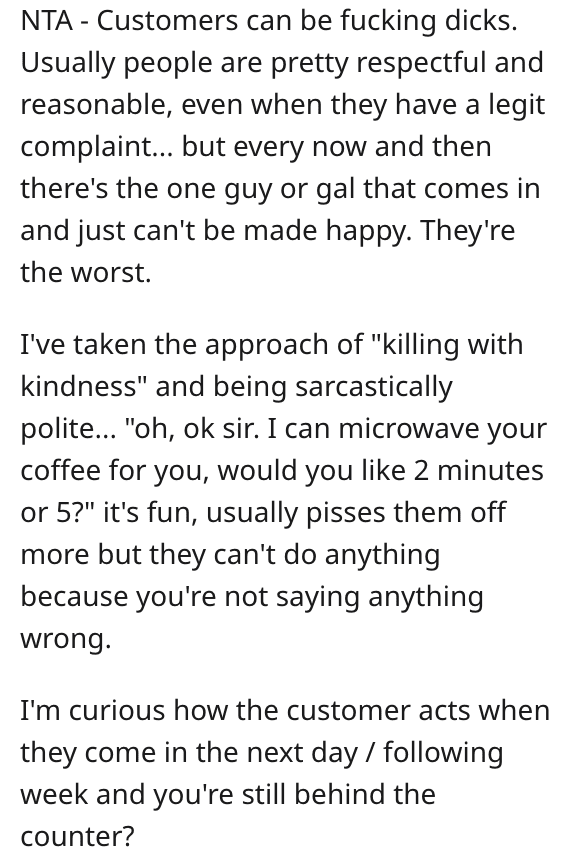 This person said that yes, the kid is an *sshole, and that so are the rude customers. 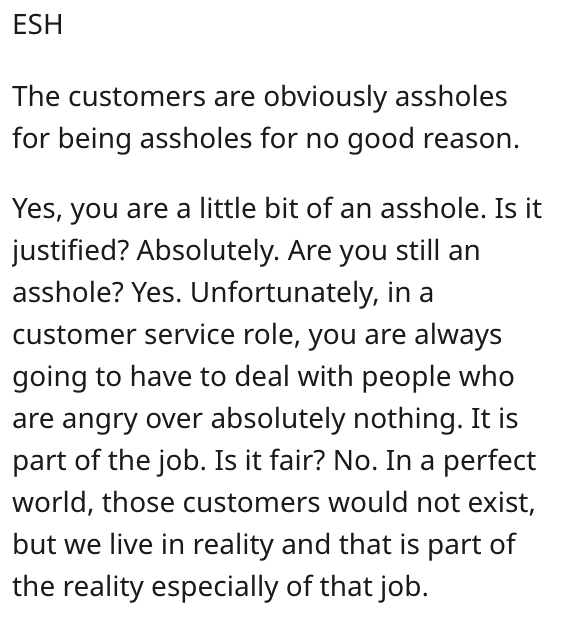 Another reader said that they also think everyone involved here are jerks, but they think so because it’s just bad business to let employees act this way and get away with it.

I think I agree with this stance. 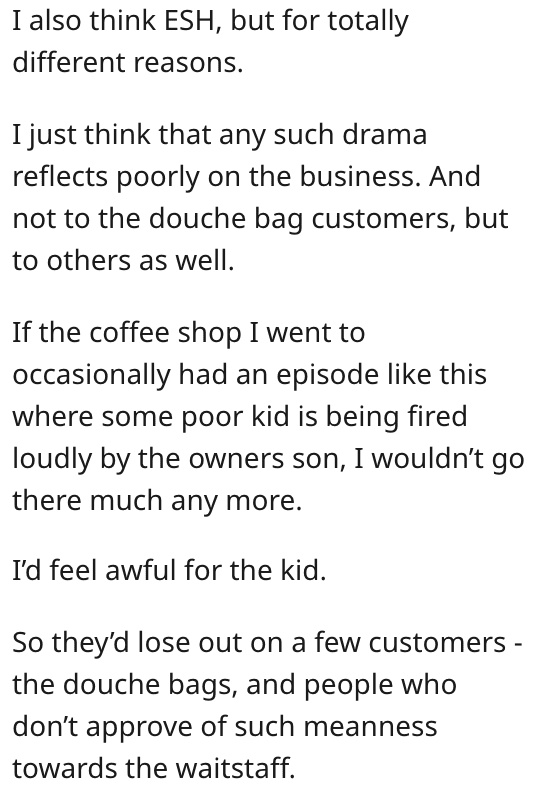 Another Reddit user agreed and said that the business is going to suffer in the end for these kinds of actions. 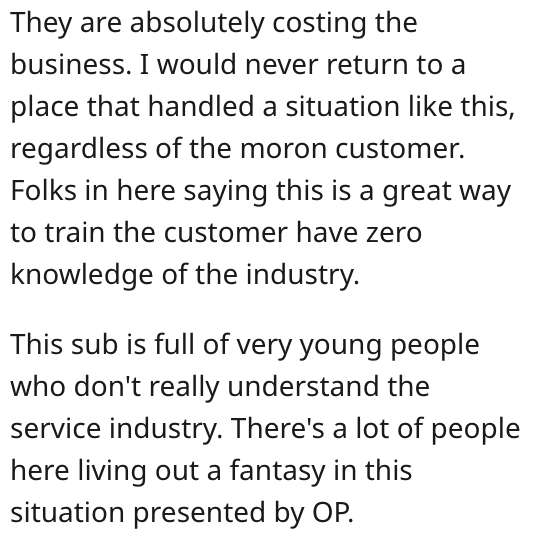 Finally, a reader said that this kind of behavior should not be tolerated by the owners of the business because it just looks really bad all around.

Dealing with occasional bad customers is part of the job, but this is not the way to deal with it. 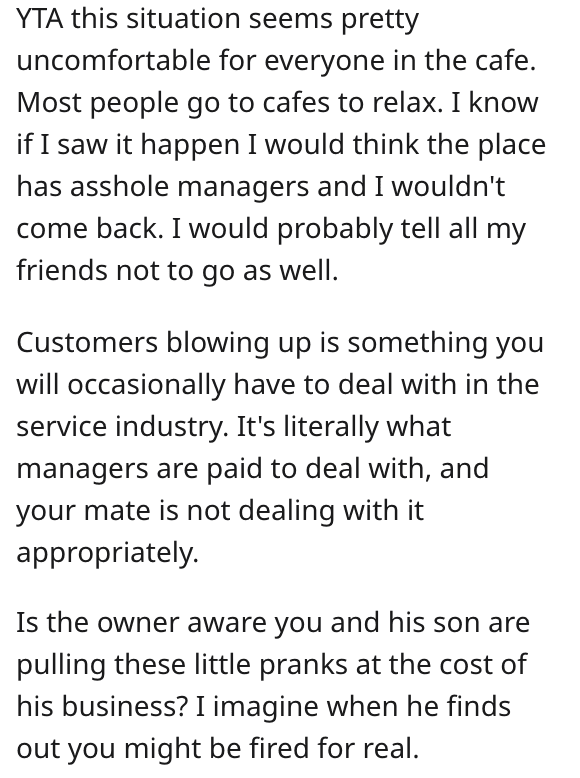 Do you think this youngster is wrong for pulling this prank?