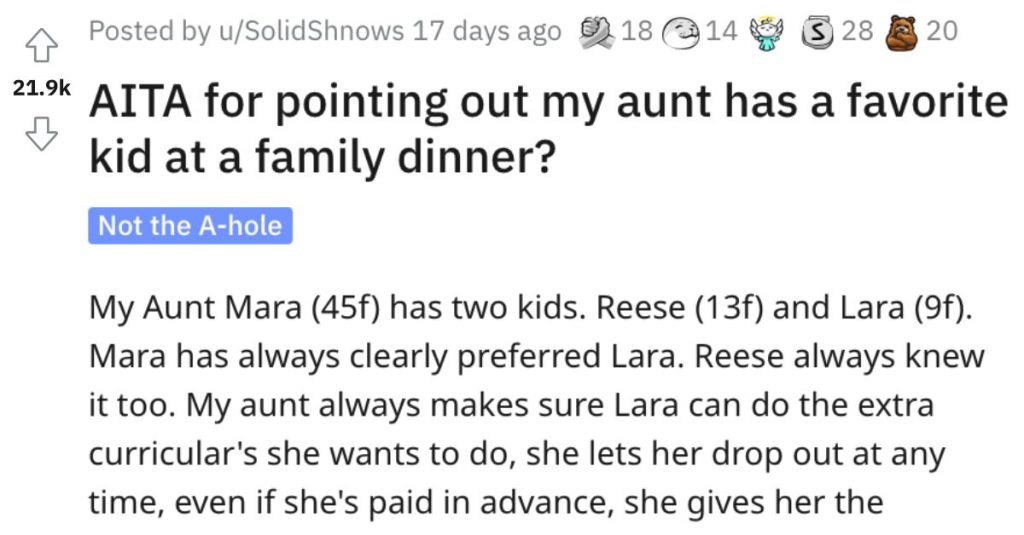 This Person Broadcasted That Her Aunt Has a Favorite Kid. Was That Wrong?

And you know these stories stir up all kinds of family drama.

Check out this one from the “Am I The A**hole?” page on AskReddit and stick around to see how readers reacted.

AITA for pointing out my aunt has a favorite kid at a family dinner?

My aunt always makes sure Lara can do the extra curricular’s she wants to do, she lets her drop out at any time, even if she’s paid in advance, she gives her the birthday she wants every year, and in general she’s more affectionate and interested in what Lara is up to. With Reese, she pushed her into dance when she was 5 and made her do dance for 4 years.

Reese never liked dance and never seemed to fit in. Mara h**ed it. She would ask her why she couldn’t put more effort in, etc. That she had always wanted a daughter who did dance. I (18f) was around there a lot because Aunt Mara babysat me for my parents while they worked and then I just had to wait at her house until my parents got home so we could save on electric bills and stuff.

I once asked Aunt Mara why Reese couldn’t do something she wanted to do and she told me they didn’t have the money for it. Reese never got to do another one but Lara has several. Soccer, dance, art and swim right now. But she’s also done basketball, photography, gymnastics (which really upset Reese because she always wanted to do gymnastics), guitar, piano, drums and singing.

Aunt Mara also discards Reese’s plans and has made her cancel to look after her sister but also made Reese skip her plans when Lara has them and they conflict.

In the last year and a half Reese has just decided to say f**k everyone. She’s definitely weighed down by it all. We talk about it because she said I’m the only one who acknowledges it. But I have definitely noticed.

We were all gathered for a family dinner Sunday (it was my grandparents birthday this week so the family decided to celebrate Sunday) and Reese was in a really bad mood. Aunt Mara told her she was bringing down the mood and Reese got up and left the table.

Aunt Mara said she didn’t know what was up with her but she’s always acting like the whole world is out to get her. I mentioned that maybe if she didn’t show such blatant favoritism Reese would be happier. My aunt and parents were pi**ed I would bring it up, my grandparents asked what I meant.

Aunt Mara said I didn’t know what I was talking about and Reese is such a drama queen. I told my grandparents what I meant and they were shocked. Aunt Mara said Reese never wanted to do anything. Grandma remembered how often Reese would ask to do gymnastics.

My parents told me it wasn’t the correct time or place to bring it up and I embarrassed Aunt Mara.

One Reddit user said that the aunt is responsible for her own embarrassing behavior. 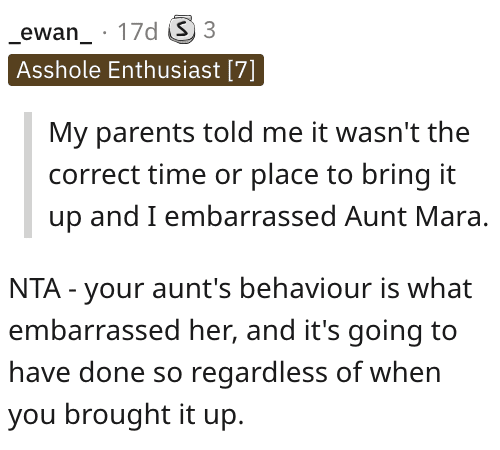 Another reader argued that the writer’s parents need to level with them and tell them what’s really going on in this situation. 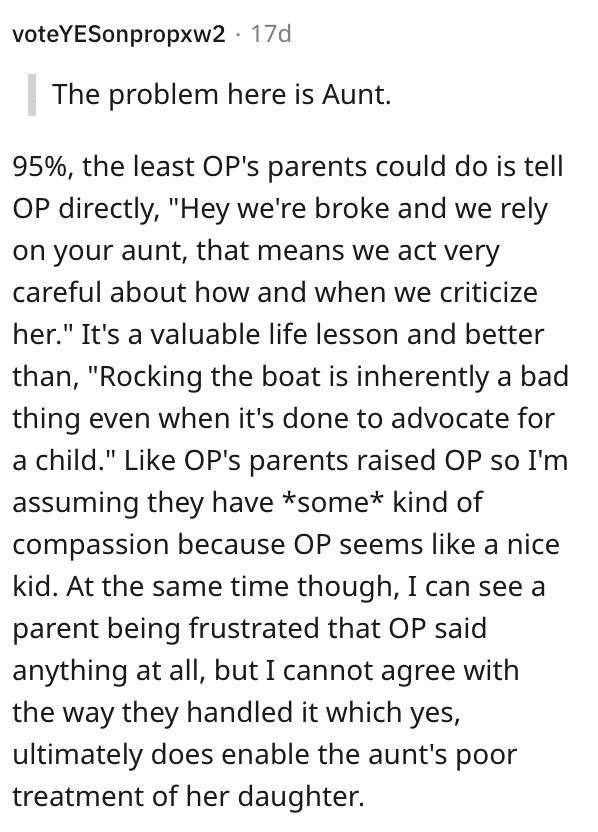 And another reader said that the writer was not an a**hole and they even commended them for speaking out! 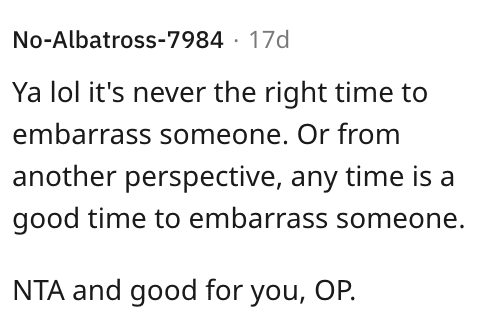 Do you think this person acted like an a**hole?

Or was it no big deal at all?

Tell us what you think in the comments. Thanks a lot!