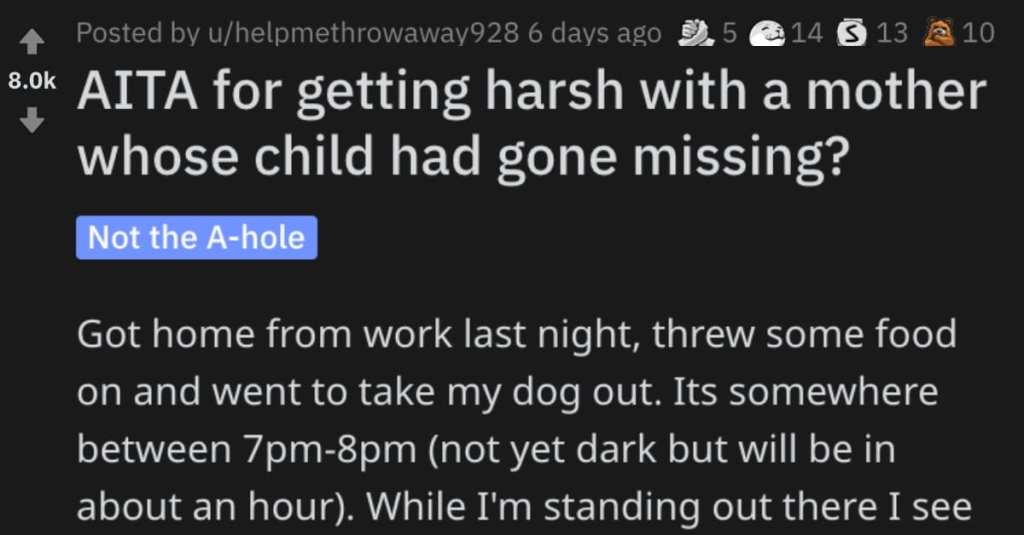 This Person Got Harsh With a Mother Whose Child Went Missing. Were They Wrong?

If you ever give another person parenting advice, you know there’s gonna be some conflict.

And I get it! Because no one wants to be told that they’re doing a bad job being a mom or a dad.

This person shared a story about some harsh words they had for a mother and now they want to know if they acted like an a**hole.

AITA for getting harsh with a mother whose child had gone missing?

“Got home from work last night, threw some food on and went to take my dog out.

Its somewhere between 7pm-8pm (not yet dark but will be in about an hour). While I’m standing out there I see this kid walking by barefoot, completely sobbing and calling out the name “Susan” over and over. He couldn’t have been more than 8 years old.

Instantly I’m worried and go over and ask him if he’s okay, if he’s lost or trying to find someone (I live in an apartment complex). This kid then breaks my heart. Between desperate sobs he tells me his two year old sister Susan is missing.

That he didn’t mean it, they were playing on the stairs and he had thought his mom was watching her when he went over to say hi to a friend that was walking by. Apparently she wasnt and his sister had wandered off.

I spring into action right away and tell this poor to let’s go find her. I ask if anyone has called the authorities or if he wants me to make a phone call for some help. The kid looks scared and says no, his mom is also looking. It was almost like he was afraid to get in trouble. So I spend the next hour with this kid looking high and low for his sister.

It starts getting dark so I tell the boy I should take him home and his mom needs to call the proper authorities if she hasn’t, but her 8 year old son should not be wandering around alone in the dark. We dont want people hunting for 2 missing kids.

So as were heading back to his apartment and he’s still sobbing and calling her name, this guy sitting out on his patio goes “Oh, if you’re still looking for that girl, they found almost an hour ago. She’s home safe.”

While there was relief, there was also fury in me. This mother had left her 8 year old son wandering around alone is desperation for the last hour. Almost the whole time I was with him, so I know there was no attempt to find him.

I get him to his apartment and knock and the mother answers the door. She goes “Oh there you are Joey. I was waiting for you to come back. Susan is fine, no need to worry. It was just a mistake. I know you wont make it again.” The boy is still sobbing.

Unable to help myself I look straight at the lady and say (in front of the boy). “Its a mistake you wont make again. This was your fault, not his. You didn’t even bother to come find him while he was out there trying to clean up your mess and your lucky you didn’t end up with two missing kids. I’m glad your daughter is home and safe, and now your son as well.”

Of course she’s start yelling at me, telling me I’m q horrible person to say that, and in front of her child and that I have no idea how scary and stressful it is to loose a child and that I have no idea what she went through after her son had told her Susan was missing. I just shrugged and said “It was a bad mistake, dont worry, I’m sure it wont happen again.” And walked off.

I feel like i might have been to harsh on a woman that obviously had a rough night and put her down in front of her child. I was just so angry at what she put that boy through.

And here’s what people had to say about it.

This reader said that this person was not an a**hole at all and that the mom in question acted inappropriately. 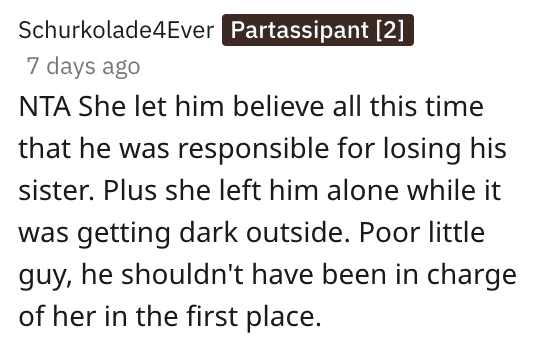 Another Reddit user said that young kids should not have this kind of responsibility and this is actually dangerous. 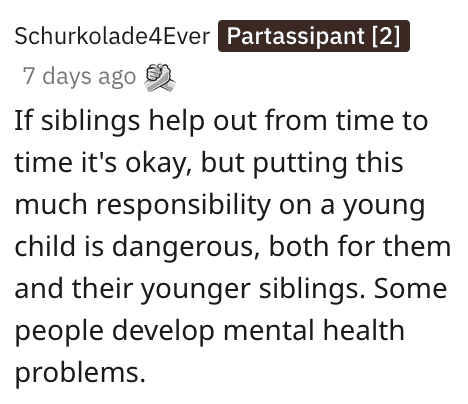 Another person argued that the mom’s expectations from this young boy were way over the top. 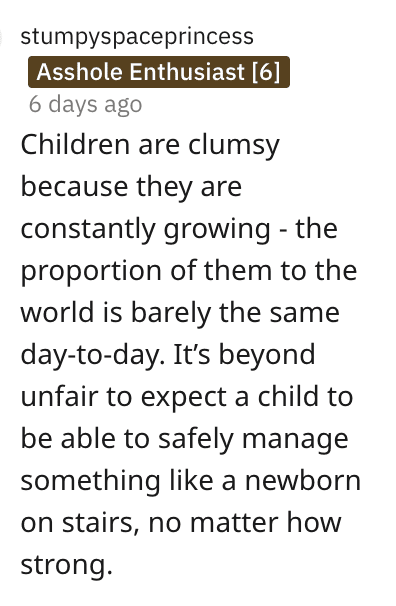 This individual said that young kids don’t have the wherewithal to be taking care of another child…especially one that young. 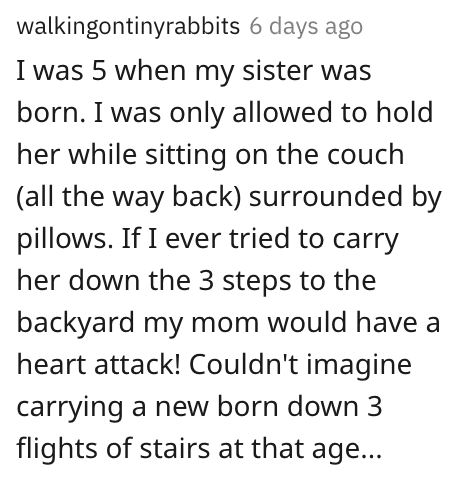 And lastly, another person said that the individual who wrote the post shouldn’t hesitate to call Child Protective Services in the future. 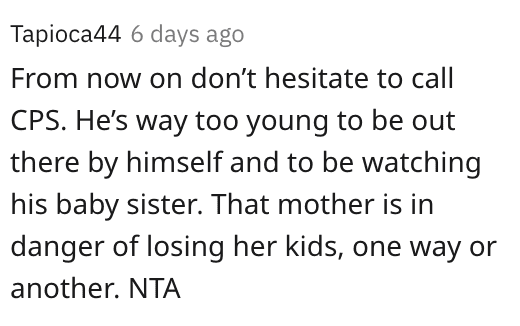 What do you think about what went down here?