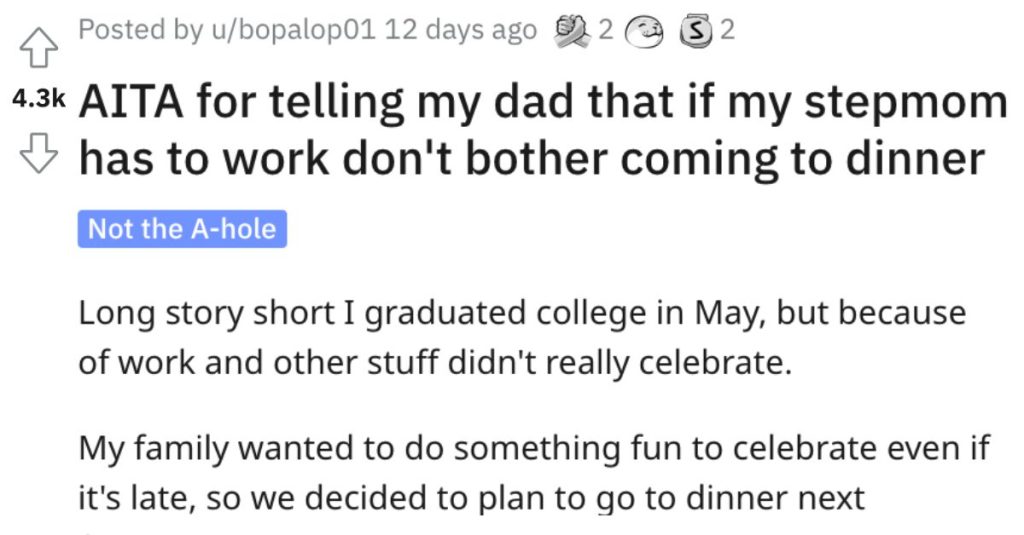 This Person Got Into a Fight With Their Dad About Always Being Late. Were They Wrong?

One of my biggest pet peeves in life is when people show up late.

To work, parties, a night out, etc.

It drives me nuts!

And a person took to Reddit’s “Am I The A**hole?” page to ask if they overreacted about their dad’s constant tardiness.

AITA for telling my dad that if my stepmom has to work don’t bother coming to dinner?

“Long story short I graduated college in May, but because of work and other stuff didn’t really celebrate.

My family wanted to do something fun to celebrate even if it’s late, so we decided to plan to go to dinner next Saturday. My sister and I basically came up with the idea and my mom agreed. Well I called to invite my dad and stepmom and he said “well Beth (stepmom) has to work Saturday, but we’ll come after she gets off”.

Thing is since my dad has been with Beth (15 years) he comes to family stuff hours late, because he refuses to drive separately (they live 20 minutes away) so he waits for her to get off work. It used to cause me being late to holidays etc too when I was a kid, since I obviously couldn’t drive myself. When I could drive myself and got there way before him, I’d have to explain where he was.

My stepmom makes her own work schedule and CHOOSES to work all holidays and most weekends, so it’s not even like we could push it to a different Saturday or even a Sunday.

When I graduated high school we had a party by my grandparents house (dads parents) it started like 12/1ish, he didn’t show up til 6-7 o’clock. I had people asking me where he was repeatedly for HOURS before he showed up, even made me call him. The party was basically over by the time he got there and tbh I wanted to go home because I was tired, but my grandma said to me (before he got there) “you have to stay a while after your dad gets here because it’s rude to leave before your guests”.

That all went through my head when he said Beth had to work, and I said “well if she has to work then just don’t come, because I know you won’t come alone or in separate vehicles and I don’t want to spend the night being forced to wait around for you”. I KNOW other people in my family would make us wait til he gets there to order or anything, or he’d get there and we’d be done eating because Beth works til 8pm, which means it’d be at least 9 by the time they got there.

He said that I was acting childish and being part of a family means making compromises. When I’m married I’ll understand. Thing is I’m almost positive that if my SO had to work when I had a family thing, I’d either 1 have them meet me there, or 2 go without them.

AITA for telling my dad not to come if my stepmom has to work.”

One reader said that the stepmom obviously doesn’t care enough to adjust her schedule to get to family events on time. 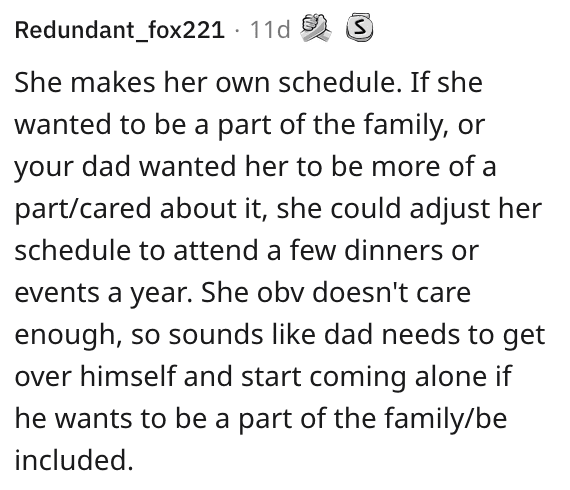 Another person said that the stepmom is obviously doing this to make a point. 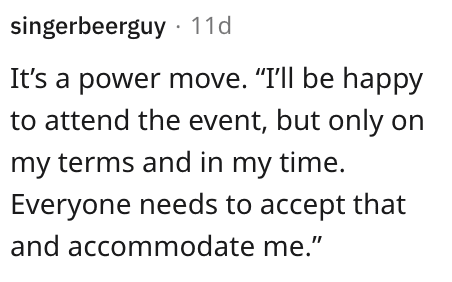 And one individual argued that the stepmom AND the dad just aren’t willing to compromise. 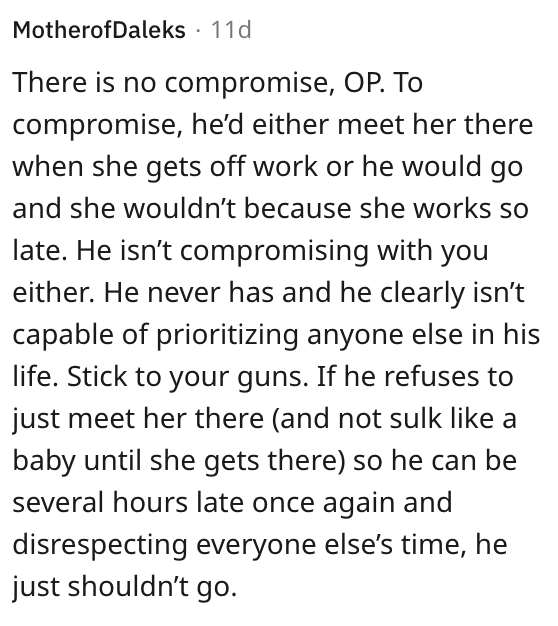