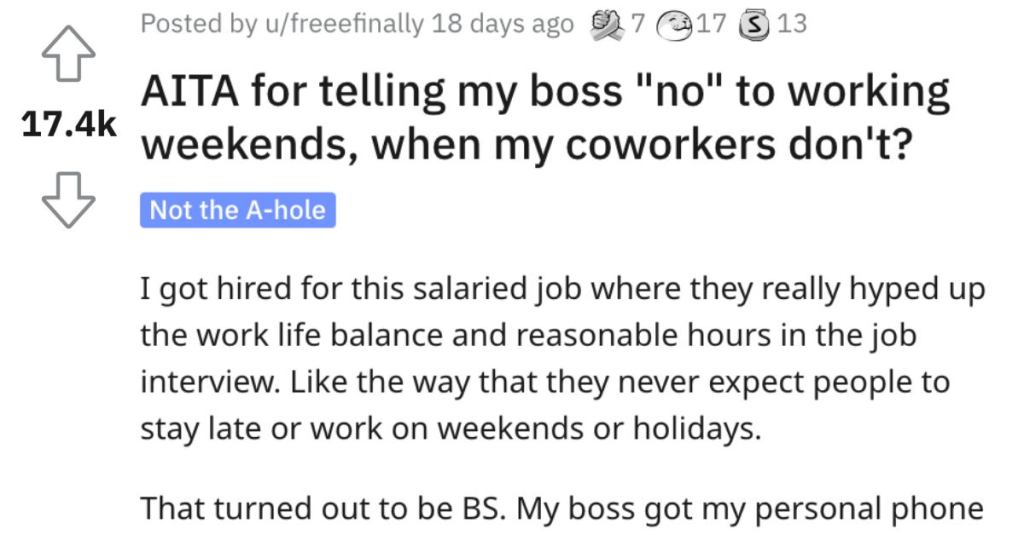 Doesn’t it drive you crazy when you get hired for one thing and your boss tries to change everything after you start?

I can’t stand that!

But what are you supposed to do when your new boss flips the script on you?

Read on to see if you think this person was a jerk for they how reacted to their boss demanding that they work weekends.

AITA for telling my boss “no” to working weekends, when my coworkers don’t?

“I got hired for this salaried job where they really hyped up the work life balance and reasonable hours in the job interview. Like the way that they never expect people to stay late or work on weekends or holidays.

That turned out to be BS. My boss got my personal phone number off my resume from when I applied and after not long he was blowing up my phone on nights and weekends asking me to come work.

I’d always not answer then when he’d ask on Monday why I wasn’t answering my phone, I’d pull out my work phone like “sorry, are you sure you had the right number? I’m not seeing any missed calls” and he’d often say he called my own cell so I’d say that I don’t really use it much, I leave it home a lot, and when I do check it I’ve usually got like 40 missed calls and my voicemail is always full so I probably miss stuff unless I’m expecting a call at a certain time. And that if he needs to reach me he should try my work phone because I’m very careful to follow up on any call to that within 1 business day.

He asked me how he could reach me outside of 9 to 5 because he sees I leave my work phone on my desk at night and over the weekend. I said that honestly I’m not glued to any phone on the weekend so if he needs me to take a call on the weekend, could he make it a meeting request and put it on my calendar, so I know to be available. Or if I know I won’t be available to take a call, I can suggest an alternate time to call.

He said that wasn’t really gonna work for him, more often things come up last minute and when he calls people on the weekend it wasn’t planned. And that he’s not calling for a teleconference meeting, he’s calling asking people to come in.

I said that on the weekends I usually have commitments that were made one to three weeks out and I’m not often able to cancel a previous commitment with under a day notice. So if he needs me in on a weekend it’d be best if he could schedule that three weeks out so that I know not to make conflicting plans.

He said that wasn’t possible and I said okay, he could try and reach out and I’d answer the phone if I heard it ringing, but I wasn’t always on the phone so I might not catch it always

Anyway, I’ve gone back to ignoring his calls and my coworkers have gotten kinda frustrated with me saying that coming in on weekends is part of the job and that I wasn’t pulling my weight. I said that I don’t know what job they signed on for but in my job interview I was promised regular hours and took my pay based on regular hours so I’m working regular hours.

My coworkers got frustrated and said that if everyone did what I was doing nothing would get done. I said maybe nothing should get done then, if it’s coming at the cost of y’all not being home for dinner with the family.

I don’t really think my coworkers see it as an option to say no, so they’re angry at me because I’m doing it and they’re not comfortable doing it

AITA for not working evenings or weekends?”

This reader said that people out there need to stop kowtowing to their bosses. 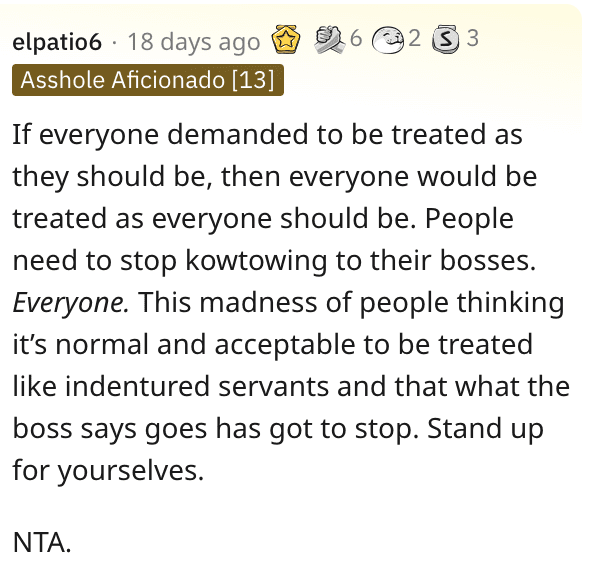 And this Reddit user made a very good point…

Another individual stated the obvious: EVERYONE IS REPLACEABLE! 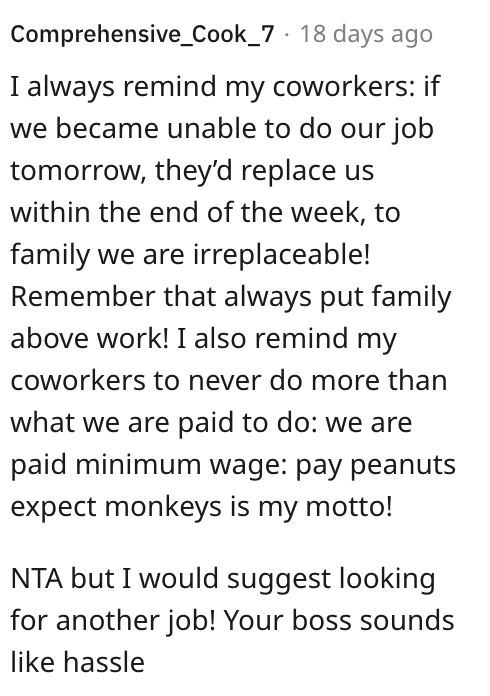 Talk to us in the comments and let your voice be heard!