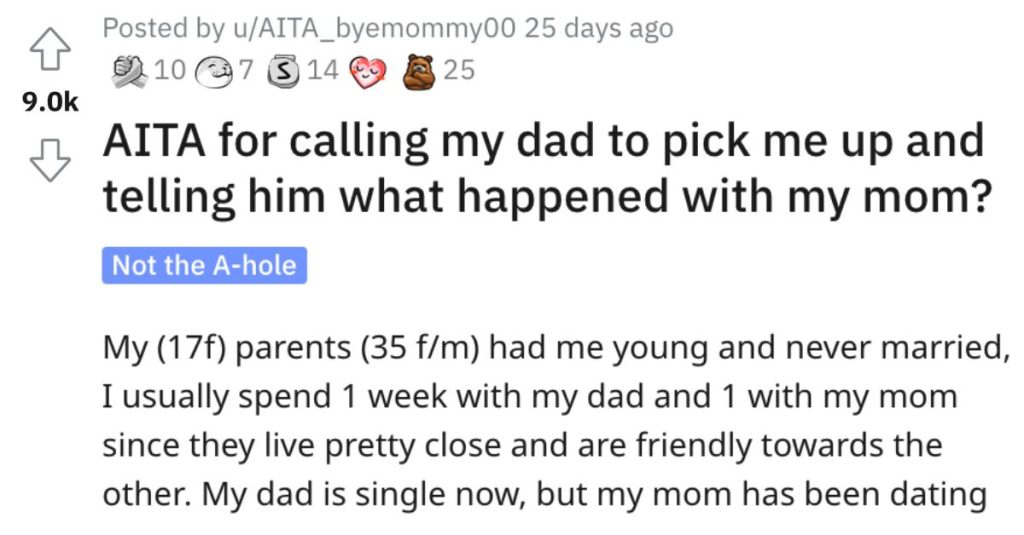 This Teenage Girl Had a Fight With Her Mom and Told Her Dad All About It. Was She Wrong?

Today, on this installment of “Am I the A**hole?”, we have a story from a teenage girl who feels like she is caught in the middle of her mom and dad…and that’s never a good place to be.

So, is she an a**hole for her actions?

Let’s see what went down…

AITA for calling my dad to pick me up and telling him what happened with my mom?

“My (17 f) parents (35 f/m) had me young and never married, I usually spend 1 week with my dad and 1 with my mom since they live pretty close and are friendly towards the other.

My dad is single now, but my mom has been dating Jerry (38M) for the past 8 years, he’s amazing not only towards my mom but with me too, he and my dad are friends and I know I can trust them both, my problem is my mom who never had any issue letting me know that I ruined her life. Sometimes she’s an amazing mom, sometimes she’s just not and this was one of those times.

The issue happened last friday, while I was at the shower I felt a small lump on the right side of one of my breasts.

I freaked out and thought that if I ignored it it would just disappear, I kept showering and when I went out I got half-dressed, I started to inspection myself again and I had the door in front of me, out of nowhere Jerry opens the door and we both react, I cover myself and he turns around, starts to say sorry, closes the door and leave.

I felt bad of course, but I know that Jerry didn’t do it with ill intention since the shower wasn’t running and I forgot to lock the door.

A few hours later Jerry comes into my room and starts to apologize to me, he says that since he saw my door closed he thought I was in my room and that he was in an emergency to get into the bathroom, but that he understood that things will inevitably be weird between us for a while and that it’s best for us to tell my mom.

I ask him to please don’t tell her but he says that if we keep it a secret it won’t look good and that my mom has to know, that he’ll give me all the space I want, but we can’t and shouldn’t keep this between us.

I agreed and we both went down and tell my mom, she starts to berate me for ”flashing” to Jerry, that she always knew I wanted her man and starts to call me names, Jerry tries to explain to her that it wasn’t like that and that it was him who accidently opened the door, my mom says that he doesn’t need to defend me and she says that I have to go to my room without dinner for being a s**t.

I did went to my room, but I called my dad to pick me up and explained what happened and that I didn’t felt comfortable here, not for Jerry but for my mom, he then tells me to pick more stuff than usual and that he’ll be here in no time.

After then minutes I go downstairs and my mom and dad are fighting and he’s telling her that I won’t be back until she apologizes to me, my mom called me an AH for ”letting my dad know our personal business” and for ”lying to him”, the next day she called me angry because Jerry dumped her for her reaction.

Also, before anyone worries, the lump in my breast was an ingrown hair that I never noticed! My dad took me to the doctor and they ran some test just to ”make sure” but everything came clear!”

One person said this girl is not the a**hole and that her mom seems like a cruel person. 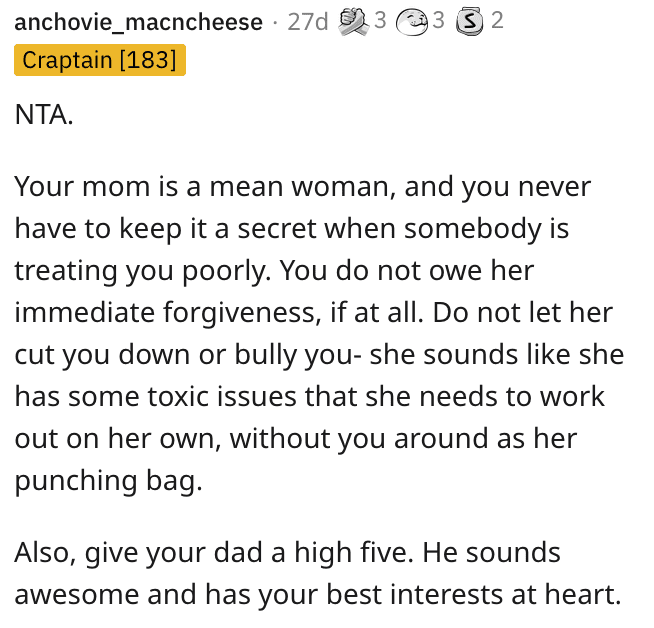 Another Reddit user said that she needs to reach out to him and they think he’ll be waiting for her. 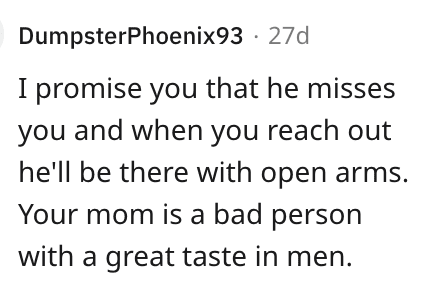 This individual said that even though her mom and this guy broke up, she should continue to have a relationship with him if she wants to. 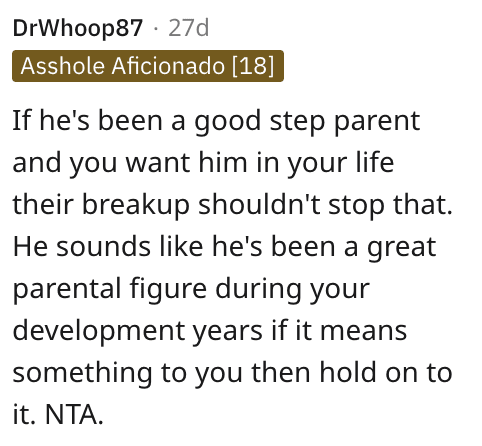 And lastly, this reader also agreed that she needs to reach out to Jerry. And they’re speaking from personal experience. 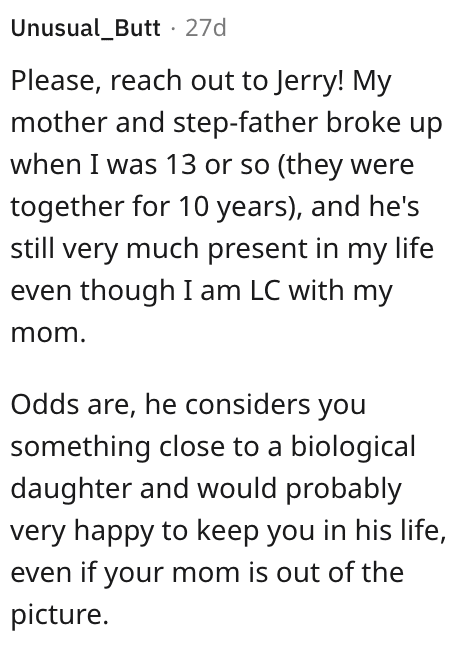 Talk to us in the comments and tell us what you think about this story.