Here in the U.S., we often see homeless folks holding signs and offering to work in exchange for money. It happens so often that maybe you don’t even really see the signs anymore. Charlotte Howard, a 16-year-old who lives in England, saw a similar sign, but she took the time to read it. It read:

I will do a trial for free to show how I work. I don’t take drugs or drink. I will also do dog walking/minding, window cleaning, shopping, gardening, car valeting/washing, housework, cooking. Anything to earn a living and make life seem worth living.

The note was left by Anthony Johnson, 36. He had been homeless for nine years, according to the Hastings & St. Leonards Observer. 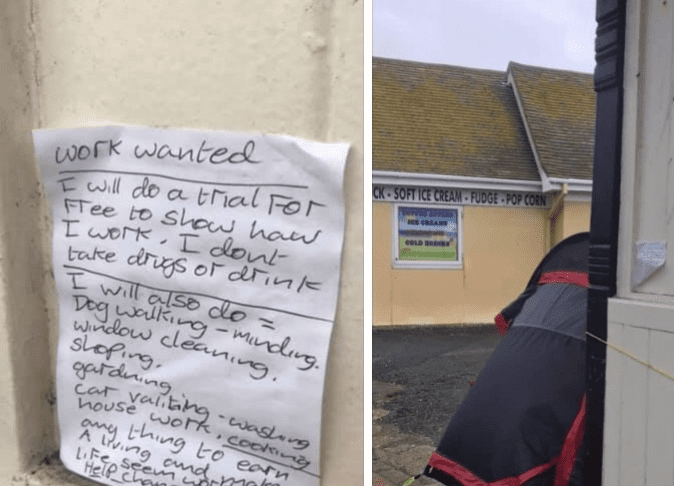 Charlotte was moved by the note and decided to help. She set up a GoFundMe for Johnson to help him buy a caravan (camper van) to live in, so he would have more substantial housing. She has already raised more than $3,000, all of which is going to help Johnson get back on his feet.

She also posted the note to social media, where Nelson Smith, a local landscape gardener, saw it. He was so moved that he contacted Johnson, offered him a job.

Johnson was deeply moved by Charlotte and her open-mindedness. It’s a good reminder to us all to really see the people around us and take action to help when we can.

Anthony was a bit overwhelmed by all the attention, but he was extremely grateful for the help he’s received due to Charlotte’s publicizing his situation. He says,

“The reaction after Charlotte posted the note was weird. I was suddenly bombarded with certain things. It’s not like I haven’t previously been asking for help but all it takes is an open-minded person like Charlotte to come along and help. She saw me and recognised my position and decided she wanted to do something to help. I wouldn’t have got anywhere looking for a job if it wasn’t for her.”

And about the GoFundMe, Anthony says,

“Thank you for helping change what I have going on. Thank you for understanding my situation. I couldn’t have got out without the help of people like them. If I could write a message to thank every single person who donated then I would.”