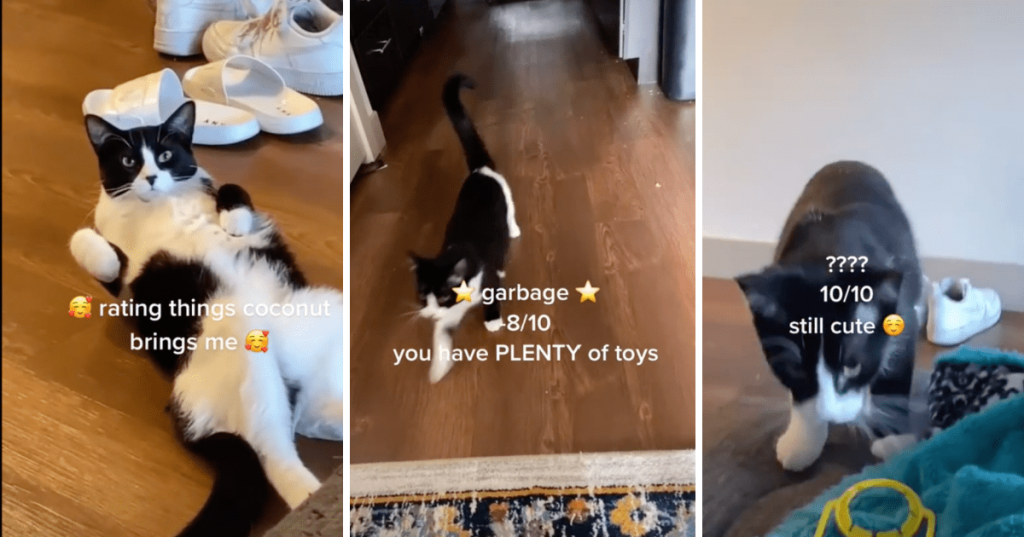 At this point, there can be no doubt that cats are the darlings of the internet. Dogs are cute and loyal and all, but there’s something people just identify with when it comes to the lazy spiciness that cats seem to have in spades.

I don’t know if the fact that they’re murderous kleptomaniacs also plays into our adoration, but I honestly don’t think that it hurts.

This woman’s cat has the common kitty habit of picking up random objects – from inside the house or out – and bringing them to us as (sometimes still living) offerings. And because the internet is the internet and is totally awesome in very specific ways, the cat’s owner can rate said objects for the rest of us online.

Her name is Taryn Troutman and the adorable cat in question is called Coconut (great name for a cat!).

She sits on the couch while he scurries over with different items and then rates them – though the cat doesn’t seem to care what her thoughts are one way or the other.

He’s brought a string bean (just one), and almond (again, a single), a bag of razzles, various hair ties, and bracelets.

All of those things have been rated higher than Coconut’s favorite toys, Snakee and Dinosaur.

If you can’t get enough of Coconut and Taryn (and who can, honestly), she also has some videos where she rates the way that Coconut sleeps.

In a way it feels like Coconut belongs to all of us, and really, what more can you ask for in an internet cat?

Whats the best/worst thing your cat has ever brought to you? We definitely need to hear about it in the comments!