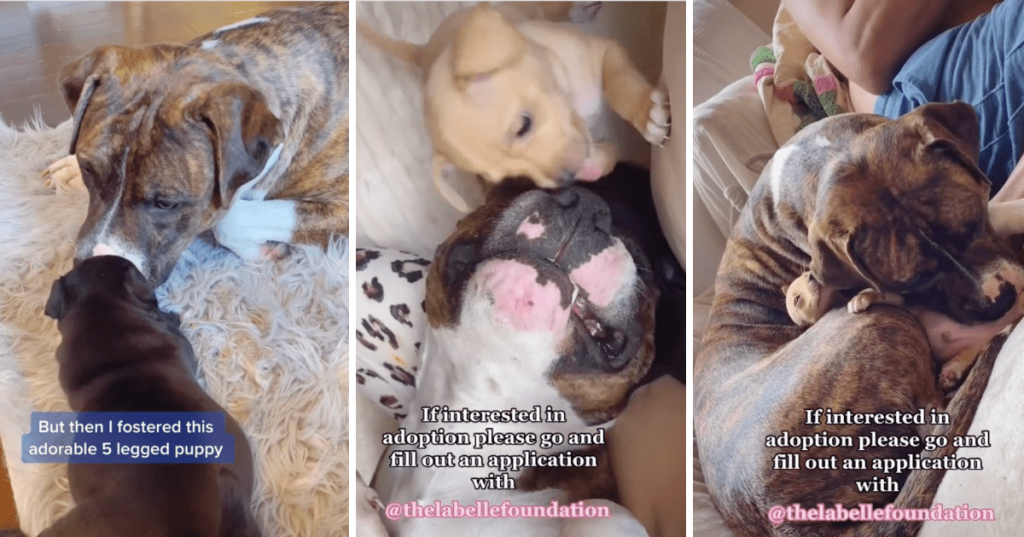 Pit bulls still get a bad rap in some circles, even though I think most dog people (or people who just understand animals in general) realize that just having the potential to be dangerous doesn’t automatically make you evil and eligible to die just because of your genes.

There are also breed ambassadors doing their adorable good work all over the country (and world), hoping to change people’s minds one day at a time – and sweet, good boi Bamse is leading the charge.

He lives with artist Dani Karlsson, who also fosters animals and has different ones in and out of her house all of the time.

When Bamse encountered his first foster, an adorable puppy with a fifth paw, he wasn’t too sure about how he could help (or maybe whether or not he wanted to share his person), but he quickly warmed to the job.

Now, Dani says that he’s basically the nanny of the house, caring for the rest of the animals the way Nanny cared for the Darlings until Peter Pan gave her a run for her money.

If you love watching dogs be their best selves and animals make way better friends and caregivers than humans ever could, you’ve got to follow his account.

There’s absolutely no way you’ll ever regret it, and let’s be honest – animal accounts are the reason for the internet and why we’re all spending so much time scrolling through TikTok.

And seriously, give a pit bull some love today.

I promise that 99.9% of them totally deserve it, and the rest of them have been ruined by humans.