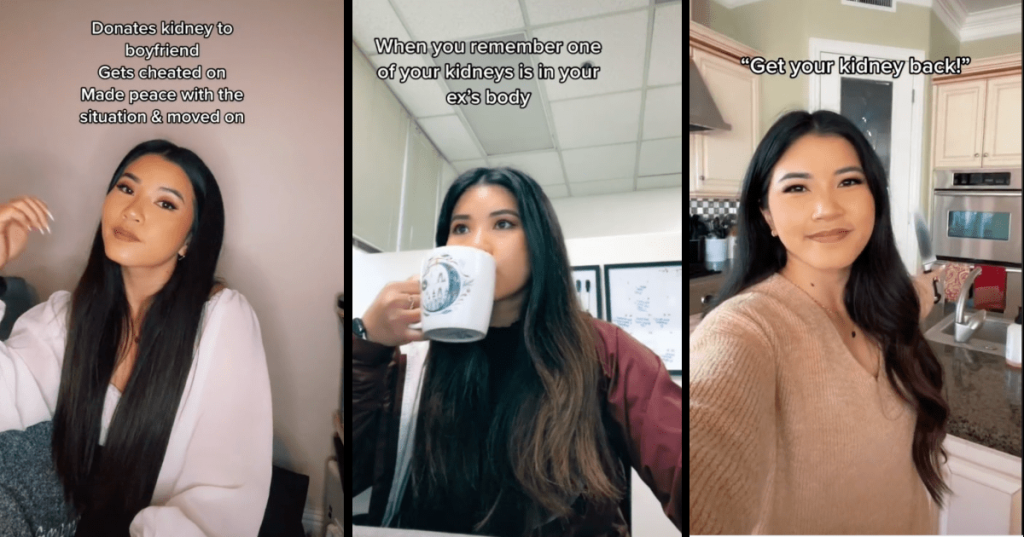 Relationships are never easy, but when someone goes so far to donate one of their organs to a loved one, I feel as if general respect would be the least of our expectations.

Because this woman donated a kidney to her boyfriend and then got treated like absolute crap in response.

Colleen Le describes herself as a ride-or-die romantic, which is probably why she was quick to step up to the plate when her boyfriend, who had been diagnosed with chronic kidney disease and was facing a lifetime of dialysis, needed a kidney.

She donated one of hers, a selfless act that improved his quality of life immensely.

So much, in fact, that seven months later he was able to attend a bachelor party in Las Vegas for a friend’s wedding. Apparently, though, he didn’t get the message about things staying in Vegas, because when he returned home he confessed that he had cheated while out of town.

The pair decided to work past the indiscretion but they didn’t last long afterward – three months later he broke up with her, saying that “if we are meant for each other God will bring us back together in the end.”

Which is…a pretty stupid way to dump someone, even if they haven’t donated you an organ.

As far as the kidney, he accused her of donating it only “to look good,” so he didn’t feel bad about treating her like crap after such a generous donation.

When she posted about her experience on TikTok, it shouldn’t surprise you to learn that most everyone was on Colleen’s side in this one.

As one person pointed out, “Don’t worry, girl he literally cannot live without you and he has to deal with that for the rest of his life.”

Another user, who has some experience, says she’s not surprised.

“I was a kidney transplant coordinator. Sadly this happens more often than you think…So sorry you were treated this way.”

The video, which has over 11 million views, basically inspired most people to hope that karma is a real thing, and would come for this dude.

Listen, everyone knows that sometimes relationships don’t work out. There are tons of reasons that people are better off without each other, and in the end, I think Colleen will be happy this guy decided to set her free.

That said, when someone has made a sacrifice of this magnitude, I do think they deserve to be treated better than she was, breakup or no.

I mean, come on dude. Do better.

What are your thoughts? Drop them on us in the comments!