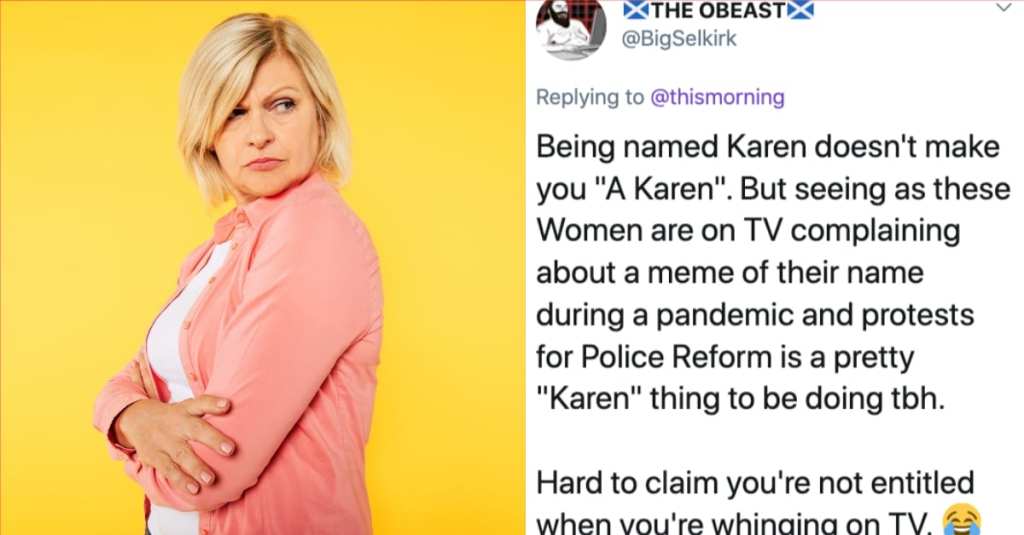 Three Women Named Karen Went on TV to ‘Take Back Their Name,’ and the Internet Roasted Them

Three Karens lived up to their moniker when appearing on a British talk show to complain about the use of their first name.

Karen Masters, Karen Triggs, and Karen Serfass decried how “Karen” is used in modern society. It usually refers to middle-aged women who publicly make a scene and are entitled and selfish.

These are not the only Karens who have made this complaint—other Karens have insisted it’s a misogynistic or racist slur.

I am screammming they got Karen’s on #ThisMorning talking bout they wanna change their name cos they’re labelled racist ?????????????????? ENTITLED pic.twitter.com/GszGcK7eEL

Karen Masters said she started a Change.org petition to get people to stop using the term.

“I feel like we can’t, as Karens, can’t talk about how this is affecting us, because then we are entitled if we do this.”

Karen Triggs said she has had enough with the trend and, fully aware that she cannot stop its use, plans on legally changing her name. Currently, she’s so embarrassed by it that she hides her name tag at work.

The third Karen, Karen Serfass, started a Facebook group for victims of the trend, which, of course, is a very Karen thing to do. Host Eammon Holmes seemed to sympathize with the ladies, saying he believed it was “almost racist to describe you guys as racist.”

The Internet took notice, and the calling out of these three women, who were fulfilling their Karen-like destiny, commenced.

The outcry was so great, in fact, that official video from the interview posted by This Morning has been removed across social media.

People said their complaints were misguided and that they were responsible for how the name was used.

The way to not be labelled "a Karen" is to not behave like one. It's pretty easy really.

There was no sympathy to be had for their plight. Instead, one Twitter user pointed out that women of color have had derogatory slurs hurled at them for hundreds of years.

Lol this is a joke. Women of color have been called mocking racist names all of their lives, yet I don’t see these women sticking up for them.

In the end, Karens complaining about the use of their name is possibly the most Karen thing to do.

How do you feel about the name’s usage? Let us know in the comments below!