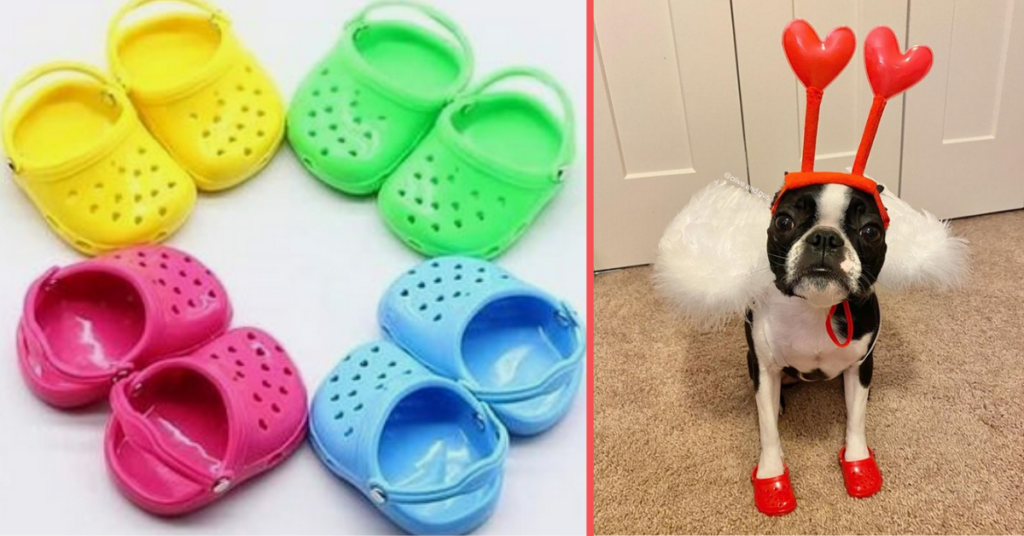 I’ll be the first to admit that cute dogs in cute clothes absolutely slay me.

On a flight some years ago, my husband flipped through SkyMall until he found a beagle wearing Pugz, which he showed to me, and I absolutely lost it.

It still makes me laugh.

Now a new company has created new dog shoes for the Instagram and TikTok generations.

Mine likes to chew them if they get in the way of her evening treat, so I had to start keeping them by the back door.

Now Crocs enthusiasts can buy a matching pair for their favorite pooch.

According to Mental Floss, the Croc-like shoes are made by an unaffiliated company called GEHARTY.

These shoes are only for little canines though.

Measuring 2.76 by 1.15 inches, the footwear is designed to fit tiny paws, so larger dogs will have to get their novelty shoes elsewhere.

And unlike real Crocs (and Pugz!), these sandals are not actually meant to be comfortable–or worn while walking.

But if you want to make your pet look cute and comfy while lounging around the house—or posing for pictures—these are the perfect shoes.

Olive, a Boston terrier from the account @oliveandgus, dressed up in her finest for Valentine’s Day.

But Olive seems to own a pair in every color.

Meanwhile, this Corgi put its foot down and refused to play along.

But Michael Anthony the Chihuahua doesn’t seem to mind.

They were selling on Amazon for $13 until recently.

After going viral, the shoes sold out in every color.

Now two colors are back in stock at the new price of $20.

What do you think? Cutest thing ever or a trend that should disappear? Let us know in the comments.