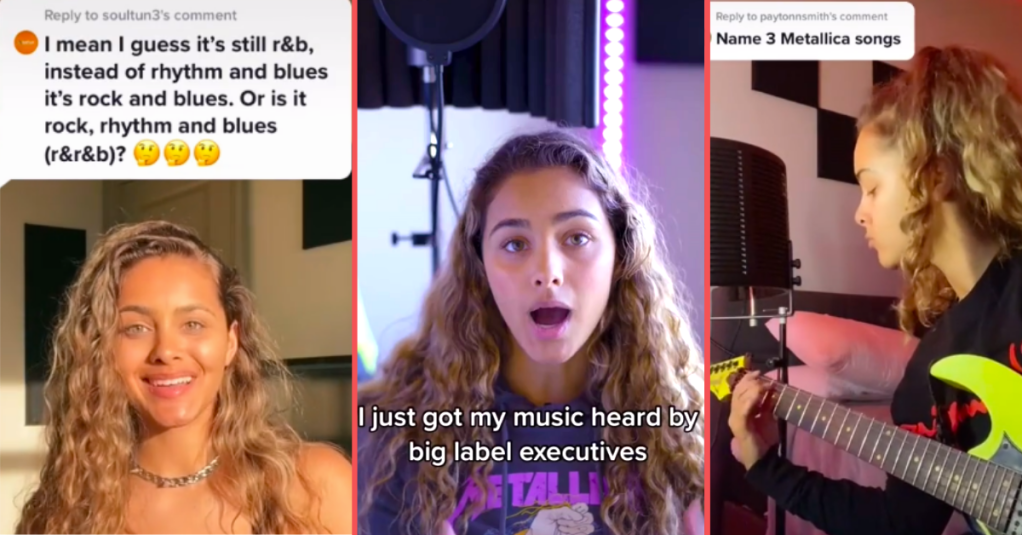 Trolls Challenged Her Right to Wear a Metallica Shirt, so a Woman Pulled Out Her Guitar and Set Them Straight

If you’re going to put yourself out there on social media, you expect that you will have to deal with some level of haters.

It comes with the territory.

The trolls come out, armed with keyboards and masked by anonymity.

And when that day comes, I hope we can all handle it with next-level grace and grit, like Zaria Joyner did.

Last December, Zaria, a young musician, posted a video to her TikTok account @zariasmusic describing the difficulties of being a woman trying to break into the industry, and asking her followers to stream her songs on Spotify.

A small, unexpected detail in the video brought in the trolls, not because she was asking for help, but because she generally presents herself as an R&B musician, and she had the audacity to wear a Metallica t-shirt.

But then… a troll rolled into the comments.

Undeterred by the haters, Zaria responded in the most amazing way possible.

Instead of naming 3 songs, she played them. She may be soft spoken, but she absolutely shreds on guitar.

Reply to @paytonnsmith I hope this video finds the #Metallica fans lol, not my best #guitar playing but that wasn’t really the point #guitarist

With chops like that, you have to wonder how long she’s been dedicated to her craft.

Turns out, Zaria was practically born with a guitar in her hands.

And she always knew that she was going to be a star some day:

Me in the first picture would be so proud of me now, I’m dropping my first rock song very soon so follow my Spotify ❤️ #guitar #rock #metal #emo #punk

Lots of Zaria’s TikTok videos show fun little snippets from her song-making process. Like this one:

Or recordings of her laying down backing vocals for famous singers like Ariana Grande.

And Zaria understands how the TikTok logarithms work, so she’s definitely willing to engage with her critics, as she did in this video response to people who disapprove of her use of auto-tuning.

She apparently took the whole experience in stride and is “taking requests, I guess.”

“I really just thought it would be funny and I didn’t expect the response that the video received.

Zaria says that Metallica was one of her earliest musical influences, and the reason that she learned to play guitar in the first place, a background that is now helping her to redefine the genre of R&B.

Reply to @soultun3 What do y’all think? This comment has me weak ?? #randb #blues #rock #guitar #guitarsolo

She loves what she’s doing, and she’s proud of her work. But she’s quick to remind viewers that it’s a tough industry to break into.

Check out her Link Tree from which you can stream her songs on Spotify or Apple Music and see for yourself.

I’d say she totally showed the haters. I wish I could ever have a comeback that solid.

Have you ever had the opportunity to respond to trolls like that? Let us know in the comments.