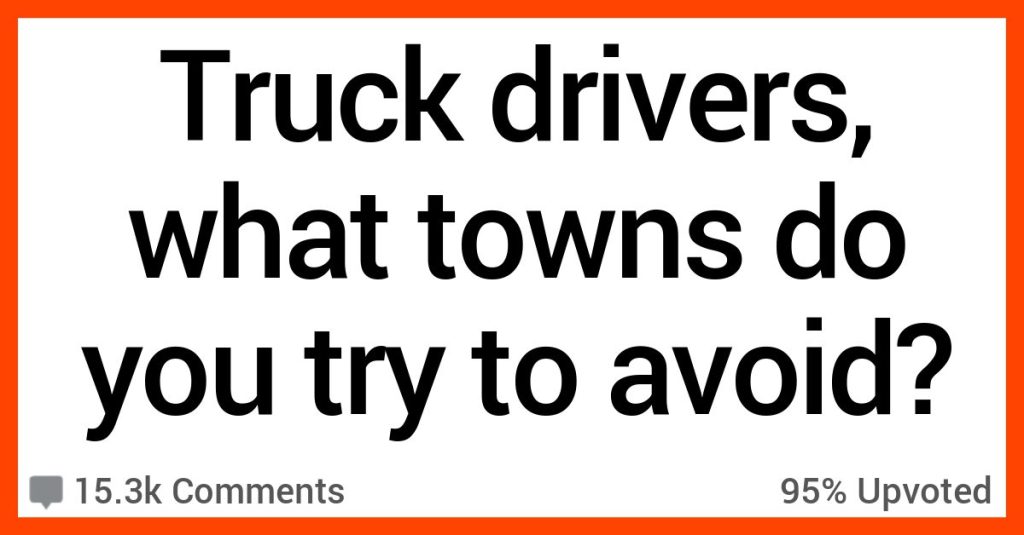 I’ve always thought that being a truck driver would be a very interesting job, at least for a few years.

You get to see corners of the country that most people never witness and you experience some crazy things out there on the open road.

And you know know that these truckers have places that they never want to stop in for various reasons.

AskReddit users who work as truck drivers talked about the cities and towns they try to avoid.

My family and I like to count the stray dogs as we pass through, my personal record is 23.”

I have to deliver fuel here, particularly in the high crime rate areas. Was dropping gas at a station that has the tank drops positioned in front of the doors.

Long story short, crackwh**e walks outside, and then proceeds to light her c**arette just as I’m releasing my vapor catch.

It blew a flaming ball past her face and all she had to say was,”Well s**t, I guess I had better smoke over there”.

I would drive through there on our way to Houston from Louisiana and one time we stopped for gas off I-10 we were told to fill up and get out because we were the wrong color.

The only reason we didn’t get our a**es kicked was because one of them realized we were military and I guess they respected that, but were warned never to stop again.

Never have again and never will.”

“I refuse to stop anywhere within 50 miles of Mission, SD, home of the famous Bob Barker.

It’s on the reservation and is scary as f**k. Saw a guy shoot someone on the street corner in broad daylight while I was stopped at a stop sign.

Another time through, I blew a tire on my trailer while heading out of town. Dragged that SOB with a flat tire for 10 miles before pulling over to fix it.

Fortunately, trailer was empty and there were 2 tires each side. Would still have thought about it with a full trailer.”

Any fellow Louisianans wanna chime in? You know I’m right. That entire strip of sh**hole towns from Natchez to Monroe…Vidalia, Ferriday, Sicily Island, Wisner, etc. is the living embodiment of dead-end, blow-your-brains-out-from-boredom-and-depression towns, but Ferriday takes the cake.

South Louisiana is creepy but it has character and history, as corrupt as it may be. I’m originally from Ruston, which on paper is a really nice small college town to live in…until you live there.

It d**d around 1995, I think. I left for the military and I haven’t been back even after I separated from the AF. The saying around Ruston is, “There’s nothing to do in Ruston but drugs.””

“I left B.C. and driving through Saskatchewan towards Winnipeg and did not feel like waiting until Swift Current to grab a motel.

I saw this sign that said the next town, Piapot, had lodging. Fine, will stay there. I turn onto the road towards this tiny town, looks like 20 people max live there, and it looks almost deserted. I see a light or two on, and find the hotel.

It has no lights on, and I get this ‘I am being watched’ feeling. I suddenly feel like I am in a horror movie where the protagonist gets m**dered by a town of crazies.

I nope the f**k out of there and drive the extra hour to Swift Current. The next few times I passed that town, I sped up a bit.”

Anywhere around Boston is a nightmare.

The lack of teeth, high crime, drugs and the fact that it supplies the entire state of Oregon with weed.

Now I don’t have a problem with weed, but the farms are hostile in the woods.

Booby traps, guards, g**s, and no cell service. Not a fun place to be.”

Unless I want to be approached by three panhandlers three separate times at one service station or cross paths with a mean drunk or two.

Then, by all means, I go out of my way to pass through.”

“Anywhere in the metro D.C. area.

Especially northern Virginia inside the beltway.

Worst traffic in the godd**n country, right there.”

And the town is full of Somali gangs… Seriously.”

I felt safer in Camden,NJ then I did in North Birmingham. I was looking for a portal that was on the outskirts of the bad part of town. I should have known when that was the last portal for like 10 miles in that direction and there were hundreds behind me.

A cop happened by, pulled up next to me and just said you need To follow me NOW. He escorted me out of there across the highway and stopped. I asked what that was about and he just said “Do Not cross into this part of town again, stay in the city center”.”

“Dryden, TX. It looks like the town in The Hills Have Eyes.

Everything is frozen in time – cars from the 70s are just laying around abandoned, buildings are falling apart, and the only place in town that looks like someone could live there (they had a light on) is a general store but it isn’t open. I heard really weird stories about that place once we made it to Alpine.

The strangest one I heard was told by an older woman we met in Alpine. We had mentioned passing through Dryden and asked her if she knew anything about the town. Please note, I’m not very good at telling stories, but this is what she told us:

A few years ago, she was driving through the area alone at night and got a flat tire. She pulled up in front of a house located on the side of the road and was starting to change her tire when the door to the house opened and a really strangely mannered man was standing in the doorway asking her what she was doing (I don’t know what made him strange, she just kept saying that something about him was “off”).

She told him she had a flat and that she’d be out of the area in a few minutes. He stared at her the whole time. When she was about to leave, she noticed he had a goat living in the house with him and it was just standing in the doorway silently staring at her.

She said she was really happy she had a pistol with her because it all made her very uncomfortable.”

Are there any towns or cities that you try to skip when you’re driving?