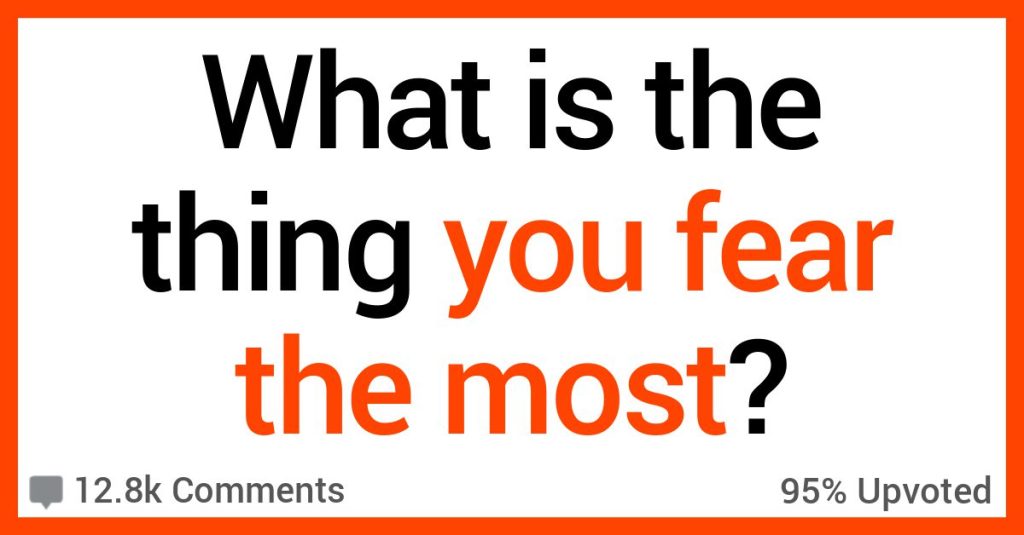 I have a lot of things that I’m fearful of, but I think one of the biggest has to be being crammed into a small space with a ton of other people without there being an escape route.

Folks took to AskReddit to talk about their biggest fears.

“Deep water or caves with no light that you have to crawl to get through.

So a cave full of water would be the worst.

That or what happened to that guy who was repairing an industrial bread oven when it turned on and he couldn’t switch it back off from the inside.”

“D**ng alone. Don’t get me wrong, I am scared of heights, cliffs, burning to death. etc.

But being alone is something I’m reminded of every morning when I wake up and no one’s there, and the fact that all those other things can be reasonably avoided but I WILL d** alone if I don’t actively do something about it.”

I made a mistake of seeing that movie when I was like 5-6 .

The fear just stuck with me .”

“That I will be stuck with my life as it is, even possibly d**ng with no meaningful thing done in it.

I’m working on it by trying to fulfill my dream and go sailing full time, but I still feel like I’m just a blip on a big scale.”

I’m terrified of growing up and needing to be an adult and like be my own person. I wish I could just disappear before I need to make any decisions.

I’m starting to make college choices and it’s so scary.”

“My biggest fear is me laying down peacefully in my bed, and then a random sinkhole just opens up underneath my room and swallows me whole.”

“I’m afraid of accidentally plagiarizing something. Not by having seen it in the past and accidentally copying what I remember, but via the infinite monkey theorem.

Imagine writing an essay for school and by pure random chance you write exactly the same paragraph as someone else. How do you prove you didn’t copy it? You’re basically f**ked.

I think that’s what scary to me, the concept that you could do nothing wrong and by winning the least lucky lottery on earth get f**ked without any possibility of vindication.”

“Being trapped in my own body for the rest of my life.

Like being paralized or having a brain injury turning me into a vegetable.

Honestly nothing scares me more.”

“Well my dad is a pastor and has been for as long as I’ve been alive. I’ve never been able to get behind religion, even at a young age.

I don’t shame it and I would never say that it’s fake because I have no way of knowing that. As an objective agnostic, I’m terrified of the idea that eternal da**ation awaits me after I d**.

I actually wish I would’ve just had normal parents growing up so I didn’t have this guilt.”

“I am not joking when I say E.T The Extraterrestrial.

That dude gives me anxiety whenever I see him and I have intense nightmares about him.

I don’t know why or what happened to caused this.”

That I’ll settle for being content one day instead of happy, and the next I’ll look up and realize I’ve completely missed out of everything that makes life worth living.”

“Becoming a parent and being bad at it…

OR not becoming a parent and regretting it when I’m old.”

I was born evil, I can never not be evil, and everyone I will ever know will find this out one day and leave me. It’s only ever a matter of time.

Thanks, parents, for those exact words.”

“That the woman I am currently in a strong relationship with will one day decide she no longer needs/loves me and leave.

I’ve had it happen twice with women that I was very smitten with, and it is worse than any literal sucker punch or rug pull I have ever experienced. The worst thing is that I can never truly know when it will come because it seems as though they mull the decision without ever giving a hint.

I can’t ever feel 100% comfortable in any relationship because of this fear.”

“That one day I will realise that my whole life, everyone I know, everything I’ve done, thought and felt, my entire experience of everything was actually a hallucination and I’m just stuck in some kind of psych institution.

I think about this more than I should…”